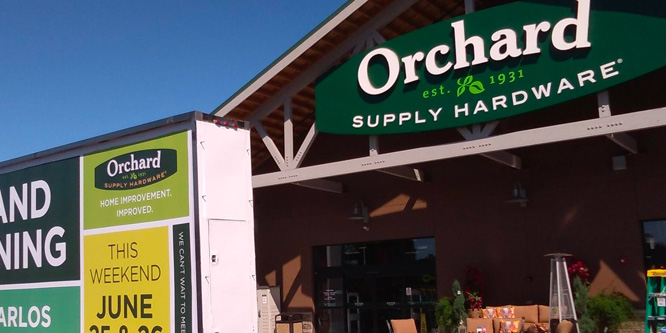 Marvin Ellison, CEO of Lowe’s, was criticized by some for being too slow to act when it came to closing underperforming stores when he held the top job at J.C. Penney. It appears that he doesn’t want to make the same mistake in his new job. Yesterday, Mr. Ellison announced that Lowe’s would shutter all 99 of its Orchard Supply Hardware stores and a distribution center used to supply them by the end of the year.

Lowe’s acquired 60 of Orchard Supply’s stores out of bankruptcy five years ago for $205 million. The soon to be defunct chain, which was spun off by Sears Holdings in 2011, lost $65 million last year.

Speaking on a Lowe’s earnings call yesterday, Mr. Ellison said, “hindsight is 20/20” and the decision to acquire Orchard Supply was a mistake in that context. Closing it, he believes, will prove to be the right choice.

“The business was just not running well, and as we started to do the strategic assessment of where we wanted to invest our capital and where we wanted to be focused, it became really clear to me and to the leadership team that we want to be focused on our core retail business, and we could grow Orchard into the most dominant small box specialty home improvement channel in America and it would be very minimal positive impact from an EBIT and from an overall revenue standpoint to the Lowe’s business,” Mr. Ellison told analysts (via Seeking Alpha).

DISCUSSION QUESTIONS: Is Lowe’s making the right decision to shutter Orchard Supply Hardware? What other changes will the chain need to make to remain competitive with Home Depot?

Please practice The RetailWire Golden Rule when submitting your comments.
Braintrust
"To me, this is the old 'batten down the hatches' maneuver."

"Seems like lessons were well-learned while Mr. Ellison was at J.C. Penney."

"Closing Orchard Supply is not the only change being made, as he is now “shaking up the C-suites” at Lowe’s."

This appears to be a wise move. As noted, too often retailers hold on to under-performing stores longer than they should. The revenue hit from the closures is short-term and it’s the kind of strategic move Ellison can make as a new CEO. I agree that Lowe’s needs to re-focus on their core business – Home Depot is delivering stellar performance and Lowe’s needs to close that gap.

This type of decision is not easy to make. But if the numbers are what Ellison said they were (minimal impact on Lowe’s bottom line) then shedding Orchard Supply Hardware is not a bad move. Would selling the company to a strategic buyer (by definition, a competitor of Lowe’s) have been a better move?

I think the idea to shut them down was strategic, as it’s not unheard of “small” companies with a revised vision taking down the giants of the industry. I’m sure Mr. Ellison and team have enough to focus on and did not want to add one more thing to their list.

I have to agree with Mark. Much as it is incredibly painful to do, if Orchard Supply Hardware has underperformed for some time, and continues to show the same prospects going forward, then shutting it down is the right answer. That is, presuming they had put an earnest effort into reviving the brand.

Regardless, it is always a sad case when a brand cannot come back from the brink. Shutting the doors always has to be the last resort. On the other hand it’s better to do the difficult job fast, rather than letting it linger.

Retail 101: don’t get distracted, focus on what you do best. The only problem with that is — someone with a big orange logo already does the EXACT same thing better than your focused best.

To me, this is the old “batten down the hatches” maneuver; it’ll look good on paper in two or three years, then Marvin can retire with the stock price twice as high. Waiting for the innovation to show up to compete with Home Depot’s great ship-to-site, BOPIS and e-commerce, additional staff, etc. Otherwise, what will we have at Lowe’s in two years? Home Depot c. 2005?

I’ll disagree with this: “someone with a big orange logo already does the EXACT same thing better than your focused best.” Truth is that Home Depot does far worse with softer products — those products which Lowe’s has always been distinguished by.

Are Home Depot results better right now? Absolutely — there’s been a contractor business surge for the past 3-4 years. And that plays to Home Depot’s sweet spot. Perhaps we forget that not long ago Home Depot was the suffering home store and Lowe’s was excelling — because during the recession Lowe’s had the products that were in demand and Home Depot wasn’t as strong.

And that is Lowe’s challenge — during this time when Home Depot is worshipped by the market — to keep from deciding to just be another Home Depot. They must keep their differences and Ellison needs to sort out how to build THOSE into their strengths.

Acquiring Orchard Supply was not the mistake; the mistake was to acquire it and then do very little with it. Lowe’s could have developed it into a hardware-type offering serving more local and urban markets, similar to Ace. It didn’t, it just left the chain to fester. As such, shuttering it is a good move. Lowe’s can now focus its attention and resources on its own smaller formats and other initiatives.

I never understood the Orchard Supply acquisition to begin with. It did FIT logically with the Lowe’s brand but there just didn’t seem like a reason for it to exist. Especially because, frankly, Lowe’s did nothing with it. Like they expected it to thrive by just being part of the Lowe’s family, which consumers never really understood. Give it up. It’s a lost cause. Focus on the Lowe’s brand instead.

I’ll always applaud when lessons are learned and applied. Ron Johnson did way too much way too fast at J.C. Penney. Ellison’s response may have been to do too little too slow. The business was in trauma. Now seems like a good moment to get it right at Lowe’s. Gotta love learning in action.

I think Ellison is on the right track closing Orchard Supply. Ideally they should sell it, but it doesn’t seem possible based on the losses the company has posted. Too many companies have wasted millions if not billions of dollars buying up companies they should never have bought in the first place, and now we’re seeing the tide starting to turn. Kroger has been selling off properties and we will see other businesses as well. When you buy another company, especially when it’s a competitor, it looks great, and the stockholders get excited because they make a quick buck. However, you’re not just buying another business, you’re buying all the problems that company has. If you don’t have the right leadership to fix it, it will fail or at best barely make a profit. Today there is so much competition it makes more sense for a company to concentrate on the business they have and do everything possible to stay ahead of their game. A company needs to figure out what makes them unique and… Read more »
3
|
0
-   Share

Seems like lessons were well-learned while Mr. Ellison was at J.C. Penney. There is a Orchard store not far from where I live. I found it puzzling as to why this location was selected. It was not very visible from the street; and signage was almost non existent. This was a poor example of “build it and they will come.” Looking back at the history of the chain one might rightly assume buying it was the first mistake.

Unfortunately, yes. This is a good decision.

I have always enjoyed shopping at Orchard Supply — yet the stores are rarely busy and they stocked an odd mix of product.

Other changes? It’s about focus, product and online sales. Home Depot also has benefited more than Lowe’s from strong contractor sales in the past few years. Lowe’s isn’t likely to pick those up — so they shouldn’t dash off to spend much capital attempting to fix that problem.

In light of the Orchard Supply closings, Ellison said “changes are less about looking at competition — but looking within.” I agree. But Home Depot better be in his sights everyday. Instead of desiring global dominance and positioning, he was saying he wants Lowe’s to be the best at what it can be. Closing Orchard Supply is not the only change being made, as he is now “shaking up the C-suites” at Lowe’s.

I do think he is definitely on the right track — do what you do best and work with winners. But I don’t know what “shake-up product offerings” means. I’m going to watch this one!

I agree with Neil — once Lowe’s bought Orchard Supply, they needed to do something with it to save the brand and derive value from the acquisition. They didn’t do that, so it makes sense now to cut the losses and focus on something where Lowe’s can succeed. We’ve seen pockets of innovation in the last couple of years from Lowe’s, but they’re clearly behind Home Depot in giving consumers the value they are looking for. If this is the first step to “cleaning house” by Mr Ellison to put Lowe’s on a path to innovation and customer satisfaction, then it’s the right move for him to make.

I think the comparison with JCP is misleading. These aren’t (simply) “underperforming” stores, they’re a separate brand. Personally I’m disappointed. For those unfamiliar with OSH, or those who dislike the dangers of competing for space with clueless flip-floppers yielding 2x4s @ Home Depot, the stores were an oasis of soft flooring and well-ordered aisles. But as much as I liked shopping there, I also often found myself leaving empty-handed; and unfortunately, I think that sums up the problem: the almost-neighborhood size came at the expense of selection.

Whether or not it could have been made to work, we’ll never know — other than the implicit answer of “no” furnished by the fact that they were already in bankruptcy when Lowe’s acquired them — but Lowe’s will still have to deal with disappointed (former) customers who think the answer was “yes.”

Knowing when to hold them and when to fold them is an important ability for any CEO. Mr. Ellison learned an expensive lesson at J.C. Penney. The analysis showed the cost, effort and time to “fix” Orchard Supply was too great and the return too small. By focusing on their core business they have increased the chances that they remain a strong competitor to Home Depot.

Braintrust
"To me, this is the old 'batten down the hatches' maneuver."

"Seems like lessons were well-learned while Mr. Ellison was at J.C. Penney."

"Closing Orchard Supply is not the only change being made, as he is now “shaking up the C-suites” at Lowe’s."