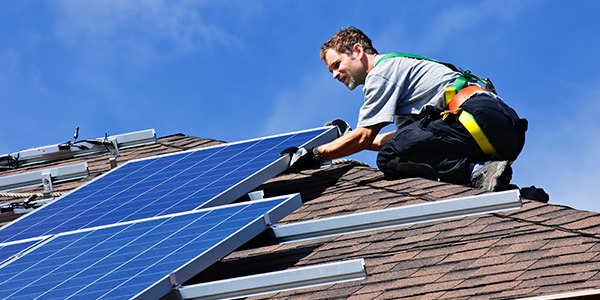 Life hasn’t been easy for Etsy in the year since its IPO. The question of how well the marketplace for DIY crafters can meet the demands of Wall Street has not been definitively answered, but a drop in the company’s stock price in excess of $15 per share has investors wondering. Etsy hasn’t been idle, though. Its most recent move seems to be on-trend and may pioneer a new one, as well.

Etsy is piloting a program in four states that allows the merchants who sell their crafts in its marketplace to get a discount on installing solar panels on their homes, according to The Huffington Post. The move is in keeping with Etsy’s hard stance on corporate responsibility. A blog by Etsy’s CEO said it is only the second company to go public as a certified B Corporation — one issued certification for social and environmental responsibility by a third-party, named B Lab.

Corporate responsibility initiatives meant to mitigate the environmental impact of fossil fuels has been big news recently. Zappos, for instance, began a program that sponsors forestry projects to attempt to compensate for the impact of the company’s corporate travel.

Etsy offering an environmentally friendly incentive to sellers in an online marketplace, however, seems like a step into new territory.

While Etsy may be the first marketplace to offer solar incentives on the seller side, it’s not the first to get in on promoting solar energy. IKEA recently began selling solar panels at its U.K. stores, promoting them as a way for homeowners to reduce their electric bills.

And for residents of some municipalities, solar panels may soon be a legal necessity. Inhabitat reported that San Francisco recently passed a measure requiring solar panels on all new buildings 10 stories tall or fewer.

There is no word on how Etsy sellers who rent their living spaces might be able to take advantage of the solar panel incentives.

DISCUSSION QUESTIONS:
How likely is Etsy to improve its business prospects and/or boost its stock price through its discount solar panel program for its sellers? What do you see as the business potential for solar panels and other green technologies at retail?

Please practice The RetailWire Golden Rule when submitting your comments.
Braintrust
"Etsy should concentrate on driving sales, not on residential rooftop solar."

"This solar move is more about PR rather than about fulfilling shareholder expectations and giving more value to their share price."

4 Comments on "Etsy sets up sellers to go solar"

Maybe it’s just me, but I don’t get how offering solar panels to its sellers in any way benefits Etsy’s sales or profits, or how it fits the brand’s core story. Solar is widely available, at reasonable prices, for purchase or lease without Etsy. Etsy should concentrate on driving sales, not on residential rooftop solar.

The entire mix of Etsy and Wall Street screams strange bedfellows to me. If Etsy stays true to their roots of helping hand crafters get to the market place, I’m not sure there is a lot of opportunities to maximize shareholder value.

Unless I’m missing something, the idea that offering discounted solar panels is going to increase stock prices just further cements in my mind that Etsy just doesn’t get it. As a current or potential stock holder I would want to know how this is increasing revenues or profitability. I don’t see it doing either.

In a word — not! There is simply no connection between Etsy’s brand and solar energy.

Now another brand that may be all about green decides to install solar, they are putting their money where their mouths are. Entirely different.

Although its solar program is a unique offering, it does not make Etsy the store that its shareholders were expecting. This solar move is more about PR rather than about fulfilling shareholder expectations and giving more value to their share price.

Braintrust
"Etsy should concentrate on driving sales, not on residential rooftop solar."

"This solar move is more about PR rather than about fulfilling shareholder expectations and giving more value to their share price."