Forget Kroger. Will Boxed open its own stores? 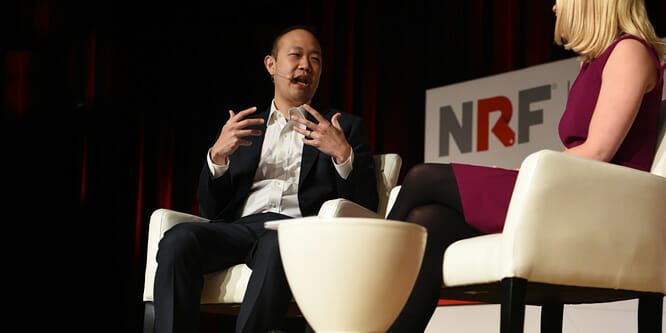 Rumors have been flying about a possible acquisition of Boxed by Kroger. But in a session at the National Retail Federation’s Big Show in New York City, Chieh Huang, CEO of Boxed, alluded to another possible development for the pure-play e-tail wholesale club. There may be standalone brick-and-mortar stores in Boxed’s future.

“I think it’s just a race; will the online folks like us figure out brick-and-mortar retailer faster than the brick and mortar retailers figure out online?” Mr. Huang said. “As you saw, Walmart took a shortcut and bought Jet. Amazon sort of capitulated and said, ‘We better speed up our in-store strategy,’ so they went out and bought Whole Foods. So, for us, definitely, definitely in our future.”

Mr. Huang further explained how recent brick-and-mortar shakeups could be a boon for Boxed.

“Even when you’re looking at Sam’s Club shuttering of their stores, in the back of my mind I’m thinking some of those stores would be excellent for us,” Mr. Huang said. “Could we use those things as fulfillment centers and make a more Millennial-focused experience? Potentially. And so, it’s absolutely in our future.”

When asked by moderator Sarah Halzack, retail columnist at Bloomberg, if brick-and-mortar stores would be soon forthcoming, Mr. Huang indicated that the need for capital would be the prime factor pushing such an initiative farther off into the future.

Mr. Huang did not give a direct answer regarding the prospects of a Kroger acquisition.

Henrik Werdelin, co-founder of BarkBox, was also on the panel and discussed the learning curve the company has experienced, having moved from pure-play e-tail to having some of its products on the shelf at Target.

“We’re learning,” Mr. Werdelin said. “We’re definitely getting more and more in tune that you can’t just take the stuff you’re doing in digital and move it into the offline space.”

Mr. Werdelin gave the example of creating text message-based games to augment the experience of a pet toy sold in-store. He sees such techniques as ways to replace the experience-extending features the company can more easily include in a subscription box.

DISCUSSION QUESTIONS: Would Boxed succeed in an attempt to expand into standalone brick-and-mortar stores? How might online retailers like Boxed and BarkBox leverage their expertise in digital marketing to better engage customers in stores?

Please practice The RetailWire Golden Rule when submitting your comments.
Braintrust
"It’s all about the shopper at this point and whoever can deliver the ideal shopping experience is going to win."

"The most expeditious way for a pure-play retailer to become omnichannel at that scale is through a thoughtful, symbiotic acquisition or merger."

9 Comments on "Forget Kroger. Will Boxed open its own stores?"

There is some logic to Boxed opening more fulfillment centers. However, at this stage, opening stores seems a step too far. It would absorb massive amounts of capital and would pitch them against Costco in a battle that they would struggle to win.

Differentiating by providing an experience for Millennials sounds interesting, but what form would this take and would that audience really want to have an experience while buying bulk groceries?

It is far less complex for digital native companies such as Boxed to evolve and grow into the brick-and-mortar businesses. They have all the insights, mobile-first strategies and can drive the personalized experiences consumers are expecting. However, as Boxed’s CEO Chieh Huang stated, the need for capital would be the driving force to enter into a brick-and-mortar channel.

This raises the question of if Boxed could potentially get acquired by Amazon, Walmart etc. Warehouse-like spaces, such as Sam’s Club shuttered locations are already equipped to help mitigate the last mile of fulfillment, however they must evolve to a more Millennial-like atmosphere.

With all that said, technology is your business these days in retail. The migration from a pure online retailer to one with a mixed brick-and-mortar model is rapidly becoming the wave of the future.

There is no doubt that more e-commerce businesses will be expanding into brick-and-mortar whether on their own or through partnerships with other retailers. It’s a natural evolution. There are many benefits when a business has physical locations and an online presence. The future is going to be a better mix of brick-and-mortar starting with smaller stores. Chains will have fewer locations, much more technology in-store and although the customer will go to the store to see the item, fewer items will be brought home because delivery will become so fast it won’t be necessary. This will help retailers reduce their in-store inventory. So Boxed may open brick-and-mortar stores because of the many benefits if done properly and I expect to see many other e-commerce companies over the next few years going into brick-and-mortar as well.

The most expeditious way for a pure-play retailer to become an omnichannel retailer at that scale is through a thoughtful, symbiotic acquisition or merger. As a combined company with Kroger, Boxed could thrive immediately from access to retail outlets and could still delve into acquiring some of the closed Sam’s Clubs.

Consumers want a seamless omnichannel experience and as retailers are providing new digital services slowly we’re seeing e-services rapidly expanding and popping up in brick-and-mortar settings successfully so at this point anything is possible.

It’s all about the shopper at this point and whoever can deliver the ideal shopping experience is going to win.

Huang’s comments about finding a way to create stores that cater to Millennials and that do business differently than the online experience are interesting. Providing experiences that resonate with your customers and creating specific in-store experiences makes a lot of sense. Finding a way to implement both of those strategies successfully is a challenge and no hint was given about what that will be. Success depends upon lots of testing, paying close attention to consumers, providing good training and keeping technology current.

I think Mr. Huang is playing the misinformation game used by many other successful marketers. Besides the CAPEX issues, the question of fit arises. Comments like this only heighten the interest of potential suitors who would rather own than compete with Boxed.

Mr. Huang is partially right; if Boxed can’t cross the financing hurdle, the answer is, no. But even with financing Werdelin is right — doing digital retailing in a physical space is just as problematic as trying to do physical retailing on the Internet — some practices don’t work in both contexts, some do and some have to be modified or they will fail.

As to the second question, digital retailers rely on information-driven systems more than merchandising gut checks. They don’t have decades of institutional wisdom to draw from or ignore. And they are slightly more likely to focus on customer feedback than inventory management. That said, those are tendencies and may not serve them all that well in practice.

Braintrust
"It’s all about the shopper at this point and whoever can deliver the ideal shopping experience is going to win."

"The most expeditious way for a pure-play retailer to become omnichannel at that scale is through a thoughtful, symbiotic acquisition or merger."