Halloween sales could be scary good for retailers 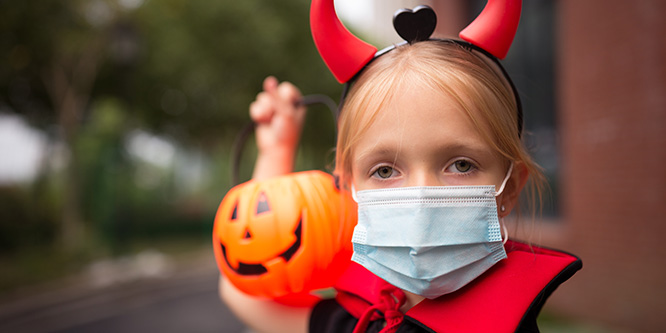 Two-thirds of parents with a child under 18 plan to do more for Halloween this year compared to other years, according to a survey from Hershey.

The survey of about 2,000 U.S. adults by The Harris Poll taken in early August further found 86 percent of Americans between the ages of 35 and 44 and 66 percent of those between 18 and 34 are either more or as excited about Halloween this year than in previous years.

Retail’s second-biggest spending holiday is expected by many to bounce back this year due to climbing vaccination rates driven by fears about the spread of the Delta variant, fewer social gathering restrictions and pent-up demand. The National Retail Federation estimated Halloween spending reached $8.05 billion in 2020, down 8.3 percent from 2019 due to lower participation.

Ted Decker, Home Depot president and COO, said on the company’s quarterly call that an early online release of Halloween products quickly sold out. “That’s a very strong indication that people are still going to engage in decorating,” he said.

Spirit Halloween in mid-July said it was looking to hire 35,000 employees as it opens 1,425 stores this year, up from 1,400 last year. “Our associates’ passion and dedication are what got us through the most challenging year in recent history and we are looking for team members to join us in celebrating what we anticipate to be the spookiest Halloween ever,” Steven Silverstein, CEO, said in a statement.

Party City plans to open 80 to 100 Halloween City stores this year, up from 25 in 2020 but well below the 250 that opened in 2019. On its second-quarter call, CEO Brad Weston said Party City is “well-positioned for the upcoming Halloween season” but prepared to make adjustments. “We’re ready for any level of demand as we are sort of still in a volatile and dynamic time,” he said.

Susan Dobscha, a marketing professor at Bentley University in Massachusetts, feels social gathering phobia will hold back Halloween participation. She told the Los Angeles Times, “We have to adjust to the new normal. I think there will still be a lot of hesitancy to go back to big crowds.”

DISCUSSION QUESTIONS: Will Halloween spending recover strongly or face another challenging year? What factors will boost and restrain spending? How should retailers prepare, considering the uncertainty?

Please practice The RetailWire Golden Rule when submitting your comments.
Braintrust
"This is Christmas in October for Halloween retailers with August being the big prep month."

"The Spooky Season will be strong. Home Depot’s online early Halloween release is a prime indicator."

"Halloween spending was down strongly last year as there were fewer events and parties and much less trick-or-treating. I can see both things coming back with a vengeance..."

13 Comments on "Halloween sales could be scary good for retailers"

Halloween spending was down strongly last year as there were fewer events and parties and much less trick-or-treating. I can see both things coming back with a vengeance this year (provided the Delta variant doesn’t keep on rising and causing issues). This means there will be very solid growth, albeit on the back of weak prior year numbers. The biggest challenge? Retailers being able to meet demand with sufficient stock.

My theory is spending will be up based on pent-up demand. Decorating the front of houses is like decorating for Christmas and if one wants to social distance, they can drive by and appreciate the creativity.
I wonder how the floods will affect this with all of the shipping issues. I guess if you want new decorations, buy them early.

This is Christmas in October for Halloween retailers with August being the big prep month. Already, one of the coffee retailers is offering their pumpkin-themed treats earlier than ever before.

The numbers on pop-up stores are promising. We might even look for earlier in-store shopping than usual, in order to beat the crowds. Halloween itself is on a Sunday, so that gives adults two full Halloween weekend nights. That should push sales in that segment. Sunday Halloween has to be a positive for trick-or-treating for families with younger children, too, so all signs point to a significant lift in sales for all things Halloween this year.

It does sound like many parents are ready to go “all in” for their kids’ Halloween celebrations and costume this year. And it also sounds like people are buying early in anticipation. So retailers will likely see a nice surge over last year. However I think COVID-19 will have a lot to say on those celebrations over the next few weeks as more schools open and Delta has more opportunities to wreak havoc.

The Spooky Season will be strong. Home Depot’s online early Halloween release is a prime indicator. And so are restaurant traffic, flight capacities and demand for college football tickets at key games. These indicators reveal a welcome and excited return to normal. I’m looking forward to viewing the creative Halloween costumes we’ll see on TV during the college and pro football games on the last weekend in October!

Halloween will be back in force this year. It’s been growing steadily for years from an amusing kids pastime to a full-blown adult holiday, and 2021 could be its breakout year as a general frustration and the need to feel normal grows.

Nobody can answer this question until we know what happens with COVID-19. If things get worse, and we face another mini-shutdown, and young children still can’t get vaccinated, 2021 could look like a slightly better version of 2020. On the other hand if things plateau sales should be higher. It’s great that candy manufacturers are bullish about Halloween, but it’s very much an evolving holiday. When most BrainTrusters were young Halloween was strictly a younger kids’ holiday and most parents were either walking with their children or handing out candy. Today, it’s a much more adult holiday with large house parties, outdoor decorations putting Christmas to shame, and – in many communities – daytime trick-or-treating through retail areas. So it’s important to understand what we are measuring. Given the uncertainty, it’s hard to say what retailers should do. It’s a Catch-22. Stock up for a return to the good old days and you may be discounting candy through New Year. Play it safe and short order and you may face out-of-stocks and mobs of angry… Read more »
2
|
0
-   Share

Better than last year? Sure. Better than an average good year? Probably not. I think Delta, (and hopefully by then the memory of a past surge) will still be a spoiler.

I agree with you Peter. Seems we’re in the minority.

I agree with Peter and Gary! The pandemic is not over and it will likely still impact parties and “trick-or-treat” activities.

Right now, and I’m speaking about our client base, all boats are floating: retail, restaurant, automotive, health care — all pushing forward like it was 2007. Seems we’re in an upswing on finally executing all those initiatives we learned about over these past two years (knock on wood). Tally ho!

I am not very optimistic on Halloween 2021. I do think there is pent up demand, and sales will be better than last year. I have serious doubts they will return to pre-pandemic levels anytime soon. Trick or treating has been in decline for a while. Home decorating has been strong, but I suspect that market is pretty mature at this point. I hope that this current wave of the pandemic is waning by then. Even if it is, I don’t expect people to return to discretionary spending quite as fast this time around.

Perhaps scariest is that we’re so heavily dependent on a time like Halloween. On the other hand, it’s also a lot of fun. I’m not sure I trust any of the predictions, but they make for fun reading.

Braintrust
"This is Christmas in October for Halloween retailers with August being the big prep month."

"The Spooky Season will be strong. Home Depot’s online early Halloween release is a prime indicator."

"Halloween spending was down strongly last year as there were fewer events and parties and much less trick-or-treating. I can see both things coming back with a vengeance..."