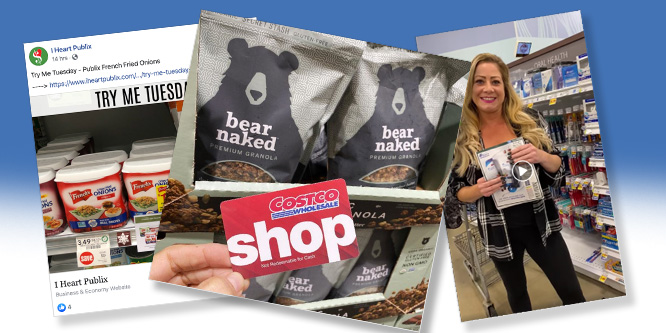 Good grocery store experiences can be worth telling the world about, and some fans of major grocery chains are doing just that, bringing their enthusiasm to social media — without financial support from the retailers.

Aldi, Kroger, Trader Joe’s, Costco and Publix all have their own unaffiliated “everyday influencers” online, whether on standalone blog sites, YouTube, Facebook or Instagram, as reported by CNN.

Depending on the outlet, they report on deals happening at their local stores, promote products they like, facilitate discussion about what they like and the best way to use products and provide superfan strategies for store navigation. Followers of these influencer outlets number in the hundreds of thousands.

While some chains are merely enjoying the free viral marketing, some are launching strategies to take advantage of the earned social presence. Kroger has begun providing some influencers with early ads to run (and personal invitations to corporate events). Whole Foods has piggybacked in-store offerings onto fan reaction videos that express excitement about particular products.

Outside of grocery, online influencers not officially affiliated with brands have grown in popularity alongside this decade’s explosion in social media usage. In some spaces, like fashion, retailers have jumped on board with leveraging influencers for marketing purposes.

For instance in 2018, Nordstrom partnered with three Instagram- and YouTube-famous fashion bloggers to create and sell collections based on their personal brands. All three bloggers promoted the collections online and made in-store appearances. In the case of the Something Navy brand, created in conjunction with style blogger Arielle Charnas, the collection earned between $4 million and $5 million.

Even kids have gotten in on the influencer act, especially in the toys space. In 2018, the six-year-old boy who stars on the Ryan ToyReviews YouTube channel (which has billions of views) partnered with Walmart to create a line of branded toys under the moniker, Ryan’s World.

Studies, however, have indicated that many companies have found difficulty measuring the ROI of influencer-based campaigns, in particular due to the lack of an easily drawn connection between the influencer and any eventual customer conversion.

DISCUSSION QUESTIONS: Is it wise for grocery stores to inspire customers to start blogs, Facebook groups and the like that communicate about their brand? Are grocers right to remain hands-off with their relationships with these influencers, or should they be paying, incentivizing and guiding them?

Please practice The RetailWire Golden Rule when submitting your comments.
Braintrust
"I’d say if a social network community happens organically — great. If it doesn’t — I see no reason to nurture it along."

"Grocery brands are wise to embrace their social media influencers — especially if they are not sponsored or otherwise compensated..."

"Incentivizing influencers makes sense because it encourages them to do a better job promoting brands."

8 Comments on "How should grocery stores leverage unaffiliated influencers?"

Grocery brands are wise to embrace their social media influencers — especially if they are not sponsored or otherwise compensated, as it makes their advocacy and recommendations much more authentic and believable. In fact, unpaid influencers with a substantial follower base may very well result in the type of online goodwill a brand would never be able to buy, versus the paid influencers so often seen as just another form of advertising.

Not everything that matters can be measured and I have no doubt that influencer campaigns play an important role in retailers’ marketing mixes.

I recently looked into a brand that I saw popping up in several feeds that I follow. The mentions were artfully orchestrated in a way that seemed organic or I wouldn’t have bothered.

Incentivizing influencers makes sense because it encourages them to do a better job promoting brands. Striking a balance between ham-handed promotion and too-subtle hints is an art. The same holds true for unboxing performances. If retailers and brands are going to go there, why not take the extra steps to ensure that their stables of influencers have access to best practices and hit the right notes?

Sharing inspiration and building community should be high on the list of most every retailer. As people are authentically sharing their experiences, it creates connection beyond what marketing could ever do. Retailers should support these customer efforts, although it’s not black and white. Sometimes it’s appropriate to compensate influencers, other times supporting them with free product or other incentives is the right choice, or even just engaging and guiding. It all depends on the influencer, the situation and the channel — no one size fits all.

Careful what you wish for. Should retailers remain hands-off? I think the answer is, “Yes.” Compensated influencers are sometimes viewed as poorly paid shills. So, based on that, I’d say if a social network community happens organically — great. If it doesn’t — I see no reason to nurture it along. These forums can turn ugly in a heartbeat.

This question is asked and answered. The concept of “influencers” has been a sound strategy for a number of industries. We want people talking about us in a positive way. When we deliver an experience and sell product that our customers talk about, it drives more business. Influencer marketing is a sound strategy that should be considered by grocers (and any other type of retailer).

Any organization in any industry needs a multi-channel approach to marketing and advertising. I see no reason not to augment a healthy, thriving social stream of independent influencers. Even if they influence one shopper to make a purchase that they may not have without the influencer, that drives incremental revenue. Plain and simple.

I think this is just a new way to spend marketing dollars. A newspaper insert is the way to go if you want to influence my parents. In today’s world we must use different approaches to marketing and this is one of them if we want a younger demographic. Spend the money, build the community and the guests will come.

The good communication industry research indicates that influencers have far less influence than their name implies. Grocery stores would be wise to spend most of their efforts elsewhere.

My recommendation is that they stay so far “hands off” that they don’t engage at all. There is not serious research (other than anecdote) to indicate they are economically important.

The error being made is that people heavily influence other people as they make shopping choices. But the most powerful influencers are the next door neighbor, the buddy at the bar, other folks at work….

Braintrust
"I’d say if a social network community happens organically — great. If it doesn’t — I see no reason to nurture it along."

"Grocery brands are wise to embrace their social media influencers — especially if they are not sponsored or otherwise compensated..."

"Incentivizing influencers makes sense because it encourages them to do a better job promoting brands."