Is Amazon Vine a win for all? 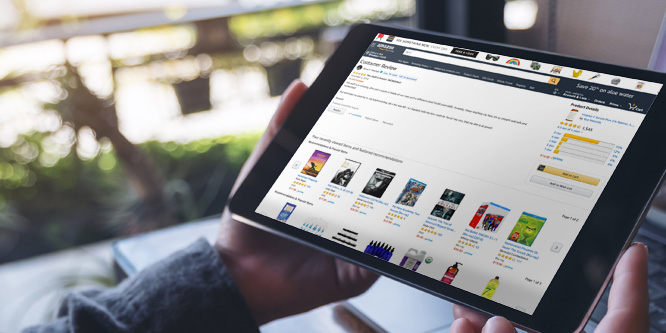 On its website, Amazon explains that Vine members are sent free product by participating vendors for “new and pre-release items to help their fellow customers make informed purchase decisions.” The invitations to join Vine are determined by an individual’s reviewer rank, which is based on the quality and helpfulness of their reviews.

The Time’s article noted that active Vine members can receive more than $100,000 in product a year.

For Amazon, the purpose of the program is to jumpstart reviews for newer products. Despite the free stuff, Vine reviews are perceived as being less tainted because “at least it’s out there in the open” versus fraudulent reviews.

Amazon asserts the reviews are “independent opinions” and not modified by Amazon or vendors. Negative reviews don’t impact a reviewer’s ranking or Vine participation. Members are removed for violating guidelines. A green stripe next to the review identifies it as being one from a Vine member.

According to Kiri Masters, CEO at Amazon agency Bobsled Marketing and a RetailWire BrainTrust panelist, participating vendors pay a fee to enroll each SKU in the Vine program and “it can be costly” — up to thousands of dollars per SKU.

Ms. Masters has heard that the program is expensive to administer and agrees that its main payback is increasing the quality and quantity of reviews across the Amazon platform. Said Ms. Masters, “This drives more traffic to Amazon as folks use the website to compare products before shopping elsewhere (including ‘showrooming’ in physical stores).”

For brands, one complaint is that reviewers are not required to write reviews for products they receive. Some also see Amazon’s private labels being overly-featured in Vine reviews.

Other ways Amazon encourages reviews is an “Early Reviewer” program that hands out small rewards (e.g., a $1 – $3 Amazon.com Gift Card) for those who leave a comment on a product that has few or no reviews. Dedicated reviewers are also rewarded with “Badges” next to their names, such as “Top 10 Reviewer.”

DISCUSSION QUESTIONS: Does the Amazon Vine program appear to be equally beneficial for Amazon, its customers and participating vendors? Is the program properly designed to limit biased reviews? Should other retailers be developing their own versions of Vine to stoke reviews?

Please practice The RetailWire Golden Rule when submitting your comments.
Braintrust
"For Amazon it’s a win, and they also gain significantly more customer insights and product reviews from a broader population."

"...if it becomes obvious that Vine reviews are merely sycophantic blogs by incentivized reviewers, it won’t deliver the true value Amazon (I think) is hoping for."

Free samples are nothing new although the Amazon Vine program does have a few exciting twists. However, I don’t know if long term the benefits will pay off. The program is costly for the vendors and consumers today are so busy as it is, they typically scan the most recent reviews of a product if they read any of them at all. More often, they usually glance at the total ratings. So, I’m not sure if the Amazon Vine program will be worth the time and the investment. I doubt other retailers will follow this model, but perhaps they may come up with one on their own that is less costly.

Home Depot has already had the leaf (?) program in effect, and Walmart had a program very much like Vine — I believe it was called Spark. I have not been as impressed with a depth or quality of the reviews that those programs produced though. (I may be somewhat biased because I have been a member of Amazon Vine, but I’m also shopper who relies on reviews.)

Some sites don’t allow the lengthy reviews that I personally like. I like it/I don’t like it is not enough information for me, but some site formats encourage those very short, say-little reviews. Amazon’s doesn’t, and often one item will have a variety of types of reviews. That tends to provide something for every shopper.

While I like long reviews, my husband likes short reviews that hit the main point. I often turn to reviews when I need to troubleshoot items. Not everyone uses them in the same ways.

Acquiring faster and more meaningful product reviews is good for shoppers, vendors and Amazon. However, if positive reviews are “bought” via free product and other inducements, then this program won’t be very useful at all. It’s hard to say exactly how this program will be received, but if it becomes obvious that Vine reviews are merely sycophantic blogs by incentivized reviewers, it won’t deliver the true value Amazon (I think) is hoping for.

Investing in Amazon Vine is a slippery slope for Amazon. Soliciting reviews based on free stuff will inevitably lead to reviews that are biased. Our value perception is changed when we don’t have anything invested in the acquisition of the item being evaluated. While Amazon will certainly get more reviews, if the reliability of the reviews – even if verified – will begin to diminish over time. And once the reliability falls, so will the value…

There have been studies showing the Amazon Vine reviews are less biased and incentivized reviews. One study had shown they were more critical, but another I had them slightly skewed positive, they’re not anywhere near as positive as regular incentivized reviews. The program has been in effect for well over a decade. It is not new.

Even if the nature of the reviews is transparent, I think there is still an inherent bias in them. People who sent things for free, who do not necessarily need or want those things, are not going to view a product the same as someone in a normal buying situation. So while the reviews may increase visibility for new items, I question how much consumers will ultimately trust them.

Totally agree, Neil! I read the NYT article and the reviewer profile — and what they do with the free goods — was fascinating. Given the merchandise is given, not necessarily needed or wanted, I believe the reviews are less than authentic.

Vine users are not people who do not necessarily need or want those things. They chose from a queue.

Studies have shown that gamification simply works. By providing the right amount of rewards and incentives, Amazon, brands, and other retailers could provide the right amount of motivation for customers to write a review. Whether or not these reviews are purely objective is another questions. Reviews certainly have merit and could influence customers’ shopping decisions. However, it’s up to the consumer to really look at a broader set of feedback before making their final decision.

In our time-strapped society, people really cherish their personal time, so Amazon offering these kinds of rewards could drive customers to spend a few minutes to share their feedback. For Amazon it’s a win, and they also gain significantly more customer insights and product reviews from a broader population.

Amazon Vine appears to be beneficial to Amazon. Under the program, Vine members are now professional reviewers, paid up to $100,000.00 a year in product. Meanwhile, vendors pay thousands of dollars to Amazon to have a SKU reviewed. Sounds like fuzzy logic resulting in biased reviews.

As a consumer, I have become leary of online product reviews because I don’t know if they are genuine. Was the item actually purchased? Is the review from a friend of the seller? Is that negative review from a consumer or a competitor? A hotel review, for example, that includes photos taken by the reviewer is valuable to me. But a product from Cindy S. who says a coat runs true to size? Not so much.

I’m with the other BrainTrust members who have said reviews of free products are bound have some bias.

I have met influencers at the NRF functions that have thousands of visitors on all kinds of products. And they make tall money. They have the power to sway opinions with honest posts and greatly impact businesses. Beneficial to a business … YES.

The value from Amazon’s perspective is clear — populate reviews for new items that otherwise might not have any and therefore cause shoppers to avoid them for fear of the unknown. The value for shoppers should be similar, but it’s hard to predict how every shopper will perceive these reviews even if they know they are part of the Vine program and see indicators showing these reviewers had free samples. For these reviewers, the value of the products themselves may be questionable before they ever try them since they were not actually shopping for the items and that may bias their reviews. This seems like more of a quick fix to quickly get reviews posted but may lose relevance in the long term.

The Amazon Vine program isn’t only a sure-fire way to accelerate reviews from the best critics on the platform… it also gives ordinary reviewers something to strive for. I wonder how many reviews have already been written for the platform by consumers with the goal of being one of the select few to get $100,000 in free product?

Social proof has become a critical factor in converting browsers to buyers. In an era of growing eCommerce, where customers can’t handle and test the product before buying, product reviews are critical and good product reviews boost conversion rates. Having a program like Vine, where customers can test and review new to market products, help jump start the review gathering process and product sales.

I think a lot of people are missing the fact that reviewers receive tax bills for items. While the items may be free from the vendors in Amazon, they do come with a substantial price tag in the form of taxes. I think that cost to them, and the fact that reviewers have no penalty or reward for any level of “stars” given, definitely keeps bias out of the system.

I generally trust Vine reviewers. I like the fact that many of them are familiar with several brands of the same product, and are in a position to make good recommendations.

It’s been around for over a decade. I know a Viner and he is dedicated. Others are not. Overall I see issues but it is a win win.

Braintrust
"For Amazon it’s a win, and they also gain significantly more customer insights and product reviews from a broader population."

"...if it becomes obvious that Vine reviews are merely sycophantic blogs by incentivized reviewers, it won’t deliver the true value Amazon (I think) is hoping for."