Is bargain hunting a family trait? 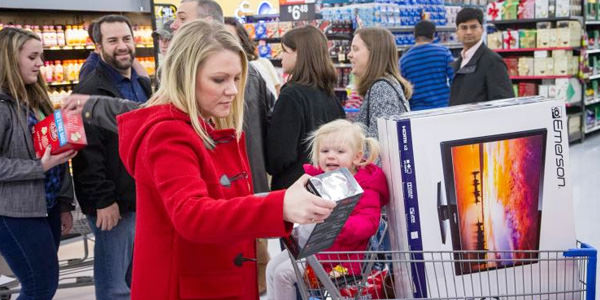 According to a study from professors at Rutgers School of Business-Camden and Pace University, "deal proneness" is passed down from generation to generation.

"It’s a thrill of getting something worth $200 for $49.99. It’s a thrill that you’ve outsmarted the business that’s very powerful," Robert Schindler, a professor of marketing at the Rutgers School of Business-Camden who led the study told the Philadelphia Inquirer. "It’s a matter of pride."

Researchers examined parenting style when surveying 83 parent-child pairs about their deal proneness. The age of the children ranged from 18 to 35, while the parents ranged from 38 to 74. His paper, "Intergenerational Influence in Consumer Deal Proneness," was published in the Psychology and Marketing journal.

The study found that some bargain hunting traits are taught. Others are picked up as children observing their parents going out of their way to take advantage of sales adopt similar habits as adults.

In one twist, while past research has found that a restrictive style of parenting has more influence on children than a permissive one, parents who are permissive of their children’s actions and behavior were found to be more likely to pass on their deal-prone habits to their children.

"We think that’s because past studies have focused on discipline-related behaviors, such as eating fruits and vegetables and not smoking. Deal proneness is not discipline related — it’s more of an indulgence," Prof. Schindler told ScienceBlog. "People who are deal-prone spend time shopping for a bargain and really enjoy getting the discount. That’s an indulgence."

Deal proneness is seen as a benefit to stores, which can target those behaviors. Consumers face positives and negatives.

"On one hand, the deal-prone consumer is more likely to buy something that he or she doesn’t really need," Prof. Schindler told Rutgers-Camden Campus News. "On the other hand, getting bargains gives deal-prone people a genuine sense of pride."

Do you think deal hunting is a learned behavior? Do you agree that deal hunting is a form of indulgence that leads consumers to purchase items they do not really need? How can retailers address this trait to their benefit?

Please practice The RetailWire Golden Rule when submitting your comments.
Braintrust
"Deal hunting is learned behavior more than ever, and the online rush of finding deals is almost to a point where the consumer needs an intervention."

"I think in general scientists are realizing that learned behavior — "nurture" instead of "nature" — has a lot more influence than they once thought."

10 Comments on "Is bargain hunting a family trait?"

It is nature or nurture is an age old question. Certainly there is a logic that would indicate the children emulate their parents whether it is small gestures, foods they eat or their spending habits. In some case this may be driven by family economics. In other cases the price points may move up but the bargain shopping behavior is the same.

I would argue that some of the bargain shopping seen today is driven by retailers using anchor pricing and then discounting as was discussed in RetailWire last week. Based on that discussion it would seem retailers have already found a way to utilize bargain shopping behavior to their benefit.

Deal hunting is learned behavior more than ever, and the online rush of finding deals is almost to a point where the consumer needs an intervention. In all businesses consumers are told that they can negotiate a better deal on everything, even if you are giving the product away at zero profit. The key is to procure the deal knowing you can keep the price very low and still make a profit. I have to deal with this a lot in my business, and it is important to know when to say no to these consumers who always want a better deal than is advertised, as our margins are extremely tight. I only see this deal hunting to grow, since our economy is in the tank and competition remains intense. The super deal hunters are out there, and it is up to the individual stores to find a way to make these folks feel good about parting with their money in your location. How you do that is going to be tough. But hey, nobody… Read more »
0
|
0
-   Share

Must be the deal-prone consumers that are driving eBay and all of the other websites these days!

But all of the research I have seen indicates that store survival requires retention of the core consumer segments returning multiple times for the service and experience they value.

I think in general scientists are realizing that learned behavior — “nurture” instead of “nature” — has a lot more influence than they once thought. So that this might also apply to shopping should not be surprising.

I think, rather than thinking about how retailers can use this to their benefit, the better question is, what is the long-term impact of the rampant bargain hunting from the great recession? It’s bad enough that retailers trained a whole generation of shoppers to bargain hunt with their discounting and race to the bottom on price. But the impact of this behavior may well be passed on to the next generation and the generation after that.

So how do retailers get consumers to start valuing more than just price? That’s a much tougher question these days.

So as much as I commented on the luxury brand article in today’s blog here, that shoppers are willing to forgo key expenses in their budgets in order to purchase an expensive handbag, I also see that those very same middle class consumers appreciate a great deal on a purchase more than ever. There is definitely a movement toward the shopper who buys fashionable apparel for deep discounts and feels great that their fashions look great for a fraction of the price of higher-priced brands. Many merchants are already leveraging this movement by offering $5 women’s tops to lure in the shoppers.

Having lived in both the good times and the bad many of us know that bargain hunting is more a matter of necessity than that of family tradition. As the opportunity for wealth increases so too does the desire to enjoy one’s status. In any market economy retailers must know what can be sold for an acceptable profit and move to be the supplier of choice.

I believe that the studies mentioned are the kind framed with “all things being equal” but not all things are equal, especially what children learn from their parents. Siblings do not act the same. If they did parents wouldn’t wonder “why can’t you be more like your sister?!” But kids do want to please their parents, whether those parents are permissive or abusive. So if we see our parents value getting a good deal, we want to emulate that behavior so that we can gain their approval, whether they are still with us or not. At the same time the retail environment for many reasons has clearly conveyed that there are deals out there for those who pay attention in the store or online. In that regard we have been trained by outside factors. And of course there are shoppers who for economic reasons are dependent on deals to feed and clothe their families and themselves. As for deal hunting as a form of indulgence that leads to purchasing items not needed, I wonder how… Read more »
0
|
0
-   Share

I think the practice is both genetic and learned. I call it the math gene and it’s often the enemy of the retailer. Good deal hunters won’t buy anything they don’t need but will only buy things they do need when the see opportunity.

Like selling cars. A car dealer would go broke if all consumers understood how the system works. Retailers rely on ignorance, impulse and emotion. I believe the percentage of the population of real deal hunters is actually quite low. Its not intelligence that leads people to purchase items they don’t need, but a lack of intelligence. You can be successful selling to both the intelligent and the ordinary. Demographically you will find high education levels at retailers such as Whole Foods and Trader Joe’s. However they will never get to the size of the monster retailers that cater to the ordinary.

The old saying goes: The apple doesn’t fall far from the tree. If your parents are bargain hunters, the kids will be predisposed to bargain hunting. That said, the retail world is doing a great job of conditioning us to wait for sales. Be sure to match prices with low-priced retailers and more.

The reason a consumer focuses on the price is because most of what is sold is a commodity and can be bought from multiple sources. The answer is to have unique products, unique offerings and value (customer service, expertise, a relationship) that makes price less relevant.

Deal hunting is not only a generational issue, it’s also an American cultural phenomenon. When you travel abroad and see the lack of corporate focus on price, it really makes you realize how strong that influence is in the U.S. We always say that the Price “P” is #1 here; everything else starts at #5. I have fun sometimes telling sales associates, “I’m more concerned with quality than price,” and watching their reactions. They’re not trained for that.

And I do believe that “deals” get people to buy things they don’t need. For ethnographic proof, just check my garage and basement.

Braintrust
"Deal hunting is learned behavior more than ever, and the online rush of finding deals is almost to a point where the consumer needs an intervention."

"I think in general scientists are realizing that learned behavior — "nurture" instead of "nature" — has a lot more influence than they once thought."