Is Grocery Outlet on its way to becoming the TJX of grocers? 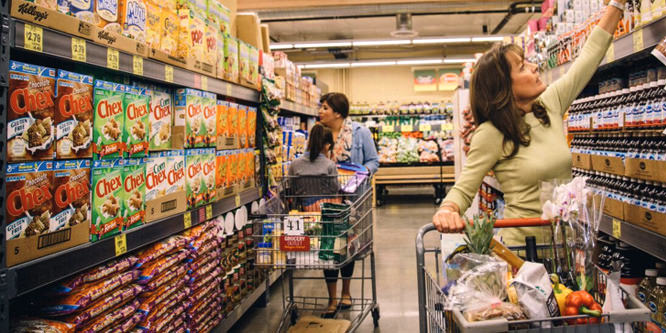 Through a special arrangement, presented here for discussion is a summary of a current article from Frozen & Dairy Buyer magazine.

One online commentator referred to Grocery Outlet Bargain Market as “the supermarket version of Big Lots,” but new stores might be better described as “the T.J. Maxx of grocery stores.”

“New customers are often shocked at the quality, not only of the products, but of the stores,” says frozen buyer Diana Curtis.

Acquired by a private equity firm in 2014, the “nation’s fastest-growing extreme-value grocery retailer” made its biggest move to date late last year when it entered the red-hot Los Angeles market. With fast growth set for Southern California and the Mid-Atlantic region, Grocery Outlet is on pace to expand from 251 stores to 376 by the end of the decade.

While meeting head on with Aldi’s recent entry into SoCal, key differences between the two chains mean there’s probably room for both.

About 30 percent of Grocery Outlet’s frozen and refrigerated product mix include staples like butter, frozen pizza and ice cream that can’t be bought opportunistically. While earning less of a discount than the opportunistic buys, the full assortment enables customers to do most of their shopping at the chain without having to visit another supermarket.

But the opportunistic buys make each store’s margin and deliver the experience. A typical store carries between 4,000 and 4,400 SKUs at any given time, reports Weldon Weatherly, VP of fresh meat, frozen and refrigerated foods. But because inventory changes so frequently based on what’s available at the time, “by the end of the year, each store will have scanned approximately 120,000 unique SKUs, which really speaks to the treasure hunt experience we offer.”

DISCUSSION QUESTIONS: How would you rate the expansion potential of Grocery Outlet Bargain Market? Do you see similar market dynamics supporting off-price grocers as those favoring off-price apparel chains?

Please practice The RetailWire Golden Rule when submitting your comments.
Braintrust
"How, as a shopper, am I supposed to know what I have to be 'on watch' for as I browse the store on a week to week basis?"

"One question … How many items will a shopper return when they are disappointed because the sticks on the corn dogs are crooked...?"

"The Grocery Outlet does a great job catering to two market niches: consumers who are looking for food bargains and food adventurers."

12 Comments on "Is Grocery Outlet on its way to becoming the TJX of grocers?"

To me, this is a perception issue. When shopping T.J. Maxx, I know I’ll find new items and a plethora of past season staples. And I rely on lower prices so I can shop more often for fashion. But in apparel and home furnishings, products don’t expire.

In food, while I get the business side of “opportunistic” buying, I feel like I’d have to be super vigilant on expiration dates. How, as a shopper, am I supposed to know what I have to be “on watch” for as I browse the store on a week to week basis? The idea of that makes me feel wary. Especially when my food trips rarely involve things in boxes anymore.

I don’t think there’s a big market here. We already have dollar stores moving into food and Aldi growing across the country for price-sensitive shoppers.

Other shoppers tend to be more interested in the “healthy” value of their food along with price. I see better growth potential in organic and locally-curated assortments at a good price. “Irregulars” (as we used to call them in the rag trade) don’t seem to translate well to food.

I think Grocery Outlet’s expansion will do well and there is potential for a lot of growth as long as they can find the right locations. People are struggling to pay bills so buying name-brand foods at a steep discount will be appealing to many. Like off-priced clothing, there also seems to be a robust market for people seeking to save money on food. The downside that could hurt the retailer’s growth is their ever-changing and unpredictable merchandise but as long as they can keep their customers engaged and provide enough products of value, I think they will do very well.

The discount malls are full of branded merchandise that is not quite up to the normal standard of the brand or in some cases last season’s merchandise. That approach has worked very well for the things customers wear.

It is another thing to eat something that might not meet the brand’s standards. Buying what we used to call “seconds” for your family to eat might fit a group of customers but I don’t see it becoming mainstream.

Food isn’t the same as fashion. Wearing last season’s sweater isn’t the same thing as eating last week’s hot dog. There will always be room for off-price models, but I think they will never scale as fast in food as they do in other sectors.

The Grocery Outlet does a great job catering to two market niches: consumers who are looking for food bargains and food adventurers. I see both shopping the Grocery Outlet in my center-city neighborhood, which incidentally is much busier than the gourmet market on the next block!

I am having a problem grasping why there is going to be a need for grocery outlets. Isn’t that what the dollar stores are doing now? Like the others, I have no problem wearing last year’s shirt. It will not make me ill. But last month’s groceries? No chance here.

For families on a budget who have planned what to purchase to stay within their budget, doing a treasure hunt shopping trip would be frustrating.

While I’m sure there will always be a place for this chain, I think its expansion potential is limited by what competitors (like Aldi) do, i.e. given the choice between name brands but limited assortment/imperfects and a full range of house brand/generics, I think the latter will have the edge.

As for the dynamics between food and apparel, there are two big differences: food is seldom a discretionary purchase — though obviously the TYPE of food might be — and the margins are lower.

Most Grocery Outlets I visit are okay, but still sub $200k per week. They do much better than Save-A-Lot and about the same as Aldi. Their success has invited Aldi to come west. However Grocery Outlet had difficulty going east. Many are independently owned and the owners seem happy, whereas I’ve never seen a happy Save-A-Lot owner. Now that Save-A-Lot is being sent to the private equity graveyard, it’s a good time for Grocery Outlet to start looking for more sites.

From the focus group of one: I’m a regular Grocery Outlet shopper. We shopped a version of this store growing up, and I always thought there was a bit of magic and excitement in what you might find. I remember finding and buying Arabic-labeled Jell-o. among other things. I now live in the Bay Area (Peninsula) and it’s the *only* grocery store I’ll regularly visit. All my other shopping is done via Google Express, Instacart or Walmart Grocery delivery. The magic of Grocery Outlet is just like TJX. It’s all about the “treasure hunt.” A month or so ago, I received an email from them saying they had four days of inventory of Mt. Vikos Halloumi cheese available for $3.99 for the 14 oz. package. The same size package costs $11.99 at at Mollie Stones. I hurried right over to buy it. They regularly have things for sale from large brands that were probably tested but never rolled out on a wide scale, There are interesting packages, flavors and line extensions to see. I haven’t… Read more »
4
|
0
-   Share

Braintrust
"How, as a shopper, am I supposed to know what I have to be 'on watch' for as I browse the store on a week to week basis?"

"One question … How many items will a shopper return when they are disappointed because the sticks on the corn dogs are crooked...?"

"The Grocery Outlet does a great job catering to two market niches: consumers who are looking for food bargains and food adventurers."