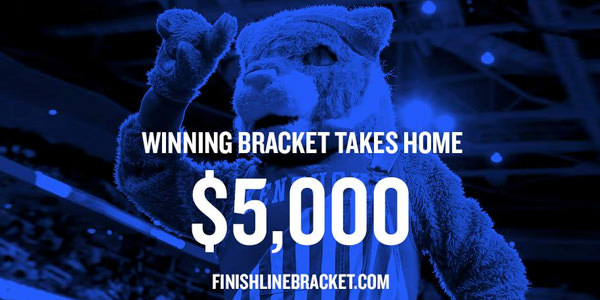 While competing with St. Patrick’s Day promotions, March Madness is also more complex than the one-day, two-team Super Bowl event. Starting with 64 teams, the win-or-go-home tournament features 63 games played over a little more than two weeks. To take advantage, retailers might need to react quickly to such turns as underdog winners in their region.

But it’s a social occasion and money is spent.

According to a survey of 1,037 consumers from RetailMeNot, Americans on average plan to spend $211 on March Madness-related products and services this year, up $20 from last year. On average, men are willing to spend almost $100 more than women ($248 vs. $155).

Of the expenses, March Madness brackets will be the heavy outlay for many. Fans willing to spend money on bracket entries planned to spend $90 on average.

Socializing presumably takes up the rest of the spend. The most requested snacks at March Madness parties are pizza (67 percent) followed by chips and dip (63 percent), nachos (49 percent), and Buffalo wings (47 percent), according to the survey.

Beyond watching games, many will spend time filling out and obsessing over their March Madness brackets. A study from the American Gaming Association predicted more than 70 million will fill out brackets this year.

At retail, Walmart, Best Buy and others are offering TV specials around the games, but not many other promotions can be found.

On the marketing front, Finish Line is holding a Bracket Challenge for loyalty members with a grand prize winner of $5,000 as well as a #CallYourShot social campaign. More creatively, Music Land in Bel Air, MD, has drawn brackets around 32 legendary guitar riffs to decide on the greatest of all time. (A first-round matchup features AC/DC’s “Back in Black” versus Jimi Hendrix’s “Voodoo Child.”)

DISCUSSION QUESTIONS: Should March Madness be a bigger merchandising or marketing opportunity for retailers? How should retailers handle the event compared to the Super Bowl and other seasonal shopping events?

Please practice The RetailWire Golden Rule when submitting your comments.
Braintrust
"I can see retailers, particularly food stores, hyping the tournament, but the NCAA tournament is not going to equal the Super Bowl or replace St. Patrick’s Day, Easter and Passover as eating events."

"The NCAA basketball tournament generated $1.15 billion in ad revenue over 67 games in 2013, compared to $1.10 billion for the 11 games in the NFL playoffs according to data collected by Kantar Media and reported by BusinessInsider.com."

13 Comments on "Is March Madness a missed retail opportunity?"

March Madness is not the Super Bowl. It does not draw the interest or viewership. The Super Bowl is a concentrated two week period focusing on two teams playing in one game, not 64 teams playing in 63 games at all times of the day. I can see retailers, particularly food stores, hyping the tournament, but the NCAA tournament is not going to equal the Super Bowl or replace St. Patrick’s Day, Easter and Passover as eating events.

Many people who do not follow college basketball do get involved during March Madness so there is an opportunity for marketing. However companies that get involved need to be quick and flexible. Locally there is a great opportunity for merchandise sales for local teams — especially for those who rarely are in the big dance. However, that opportunity is often short-lived. Since the teams involved keeps getting smaller merchandising by team loyalty can be tricky. However merchandising related to the event, such as those who pick the winner or those who have a high score or pick the most winners, could be effective.

You have to be “from there” to understand. March Madness is really a series of locally charged interest events. Growing up in North Carolina and attending UNC (see Wall Street Journal article today on how to hate Duke for perspective!), the Charlotte area and the RDU Research Triangle always has team-oriented promos going on during this time.

Of course, they have them during ACC tournament time as well. I guess maybe you have to go to a school where, when asked how our season went this year, a UNC or Duke fan will say “we were one and one.” (Note: Duke and UNC split their two traditional regular season showdowns this year, each beating the other at home.)

This is an opportunity for retailers to speak to large concentrations of sports enthusiasts about themselves. Marketing mavens should assist advertising with gathering what interest the public might wish to have about the company. If the message is interesting and has value the crowd will listen and explore. If you don’t sell food and sweets make them hunger and sweat for what you have.

I think the potential is limited.

First of all, clearly it is an idea that has greater appeal in market areas with a college or university close by, assuming it is one that is involved in the tournament.

If there is no local team, the potential goes straight down.

Next, as Max points out, it isn’t the most “concise” event to celebrate, i.e., outside of the final game which is, after all, important to fans of only two teams. There is no “big day” so it becomes the basketball equivalent of a Stanley Cup playoff promotion that would drag on and on.

The bracket idea is interesting until, of course, you remember that it is almost literally impossible to pick all the brackets correctly in advance.

So, after all is said and done, put me down in the skeptics’ column on this one.

I have seen retailers take advantage of March Madness, however primarily on a local level, especially in the towns in the event. This presents yet another opportunity to drive incremental revenue, and there are tools available to take the gut feel out of making promotional decisions. You can leverage local sporting events, combined with social chatter and even weather, to make far more accurate demand forecasts than in the past.

I love college basketball. In fact, after this I need to complete my brackets and get them turned in. I don’t have a personal favorite team in the competition. My team did not come close to qualifying (again). I can see this as a bigger merchandising opportunity, especially if your team or a local team were competing. But not to the level of the Super Bowl. That has been marketed so heavily that college sports can not compete. Besides this is 64 teams in an almost four week competition.

Sporting goods retailers and specialty shops could take advantage of March Madness to run sales and promotions that last the duration of the tournament. It is interesting that the spend to date is focused on food, drink, and gambling (formal and informal).

Restaurants have an opportunity to play the game as well. Think what casual dining chains such as BWW, Ale House or Friday’s could do to gain attention and extra visits during this time frame.

BTW, I think Voodoo Child makes it through to the “finals.”

The NCAA basketball tournament generated $1.15 billion in ad revenue over 67 games in 2013, compared to $1.10 billion for the 11 games in the NFL playoffs according to data collected by Kantar Media and reported by BusinessInsider.com.

The top 10 college basketball programs took in a combined $236 million in 2012, according to BusinessofCollegeSports.com.

Evidently, for the basketball tourney, the marketing is already in place, and with media coverage is sustained over several weeks, retailers would be remiss not to vigorously merchandise their stores to align with local market interest.

That means formulating market-level plans with contingencies to respond to a team’s deep run or early departure from the tourney. The outcomes may be difficult to predict, but the options are easy to anticipate.

While some people have high interest in the entire tournament, most interest is driven by the participating schools, (Go MSU!) and that’s a problem for retail as 1/2 or more of the participating teams are eliminated each weekend. With their team’s elimination their interest in buying related merchandise is also gone.

On top of that, the event is hard to plan for as the teams are announced a week prior the event commencing. So unless you are targeting teams that perenially make it deep into the tournament, say Duke, UNC or MSU:), there is not much planning prep time.

In the end, the entire process is challenging and creates a pretty small merchandising window in which to sell product.

God, please, no. We already have one overhyped promo event in March, and I’m going to rub a rabbit’s foot (until the Easter bunny hops away) in hopes we don’t get another.

I think this a much bigger opportunity for grocers than anyone else. Offering deals on finger food and other products needed to entertain is the best call. Team gear gets tricky, because a team can quickly be eliminated and then it will either need to be discounted or sit idly in warehouses.

Retailers should approach March Madness cautiously because I feel like the potential for a flop is somewhat high. The timing of it doesn’t put it at an advantage at all since it falls next to very established holidays.

March Madness is certainly an opportunity for retailers and marketers.

The challenge, which goes without saying, is that there is no guarantee teams make it far in the tournament at all — so fan gear for one team may not sell. However, March Madness is a nationwide event during which it seems retailers would find ways to market to a larger group. Perhaps, this is by generating merchandise which will be relevant throughout the tournament and not singular to one team.

That being said, March Madness does not draw the same interest and audience as the Super Bowl and there are a much larger number of options for merchandisers to lose out, if their picked team does not continue on. Largely, I think there are opportunities that will reap more benefit than March Madness.

Braintrust
"I can see retailers, particularly food stores, hyping the tournament, but the NCAA tournament is not going to equal the Super Bowl or replace St. Patrick’s Day, Easter and Passover as eating events."

"The NCAA basketball tournament generated $1.15 billion in ad revenue over 67 games in 2013, compared to $1.10 billion for the 11 games in the NFL playoffs according to data collected by Kantar Media and reported by BusinessInsider.com."