Is Victoria’s Secret’s ‘buy 2, get 1 free’ promo the beginning of the end? 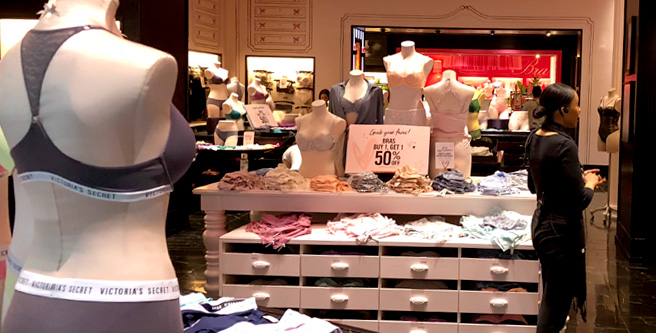 Victoria’s Secret has been called out of touch with its female consumers for continuing to push wired bras instead of bralettes. It has been derided for its sexy image that some say is tone deaf in the era of the #MeToo movement. Whatever the reason(s), the chain continues to struggle and has gotten more promotional in an effort to “sales” its way out of its slump.

In a letter to clients earlier this week, Jefferies analyst Randal Konik wrote that a “buy 2 get 1 free” promotion on Body by Victoria bras and lower prices on Pink panties were “scary” signs for the retailer, according to a Business Insider report.

“Our panty price tracker for over a decade shows this is the lowest ever price point for panties across VS or Pink,” Mr. Konik wrote. “We believe it shows how desperate the company is to drive consumer traffic and also shows how soft demand for Pink has become.”

Same-store sales at Victoria’s Secret declined one percent in the second quarter, leading L Brands, the chain’s parent company, to lower its profit outlook for the year.

Shares of L Brands fell precipitously last month when Victoria’s Secret announced a decline in revenues due to unexpectedly low customer traffic for the chain’s semiannual sale. In the end, Victoria’s Secret was forced to add two additional weeks to the sales event and further reduce prices, which cut into its margins.

“The dark store environment, the conspicuous sexuality of the offer, and the brash marketing are increasingly out of step with what modern consumers want,” Neil Saunders, managing director for GlobalData Retail and RetailWire BrainTrust panelist, told CNBC.

DISCUSSION QUESTIONS: Do you think the Victoria’s Secret business is permanently broken or can it be fixed? How would you go about repairing it if you were given the opportunity?

Please practice The RetailWire Golden Rule when submitting your comments.
Braintrust
"Can it make a comeback? I think so, but it will require a new mindset and major change."

"I think it’s wrong to focus on being out of touch when how to be in touch is the goal."

"Sex appeal was once the answer, but now it’s empowerment, inner beauty and self love."

You have to give Les Wexner credit for inventing BOGO in the ’80s but uh … it’s like 40 years later. Surely there’s something else? End of an era, you can see it coming.

The Victoria’s Secret brand needs a reset and an overhaul as it is out of touch with what modern consumers want. As a result, it has lost both customers and market share. It continues to cede both things to rivals at an alarming rate.

Worryingly, the brand makes seemingly little effort to change and I do not believe it actually understands the extent of the problems or issues. It is as if those running it are divorced from reality.

While a turnaround is challenging, it needs to tone down its marketing, connect better with customers, focus more on fit and comfort, and produce products with added-value benefits that attract a premium price. At the heart of all of this is authenticity; something that VS doesn’t currently have.

Who knew there was a “panty price tracker”? Hands? Their store designs were and are exceptional, no doubt about it but they were a disruptor because women had only department stores to buy underwear. Crafting a sexy French boudoir was genius and immediately recognizable in a world of GAP khakis. They struck gold with the fashion show to get guys’ attention and grew the brand. But deep discounts that don’t move merchandise or increase sales are indeed a huge sign the current format does not cause the shopper to buy.

Abercrombie & Fitch ditched their shirtless pornboys and skimpily clad porngirls image, opened up their stores and added lighting to bring the brand back. L Brands are smart people, I’m sure they are way ahead of us on what needs to be done. The problem is, the more they are out-of-step with their customer, the more that former customer will be shopping somewhere else. And it may cost a lot to try to win her back.

First the Big Mac Index and now the panty price tracker, these economists are getting more creative every year.

Bob I think you’re right on point, only other thing I would add is a lot of their locations are at malls and as more Millennials and Gen Z move away from malls, so do their buying dollars.

Victoria’s Secret has always had multiple items sales so I’m not sure why “buy two get one free” is such a big deal. What is a big deal are the stores and the company’s marketing. What worked 10 years ago doesn’t cut it today, you only have to look at the repositioned Abercrombie and Hollister stores to see that.

Take some of the Pink line out of the picture and you have a tough time comparing what’s sold by Aerie with what you find on a Victoria’s Secret sales floor. Aerie is young, fresh, and the models represent all sorts of young women. Victoria’s Secret isn’t young; it’s a throwback to The Wolf of Wall Street ’80s. The sales floors look like boudoirs, and the models are so over-the-top that they are unrelatable to woman of any age. Between the welcome trend of brands dressing “real women” and the #MeToo movement, Victoria’s Secret is just out of touch. Can it make a comeback? I think so, but it will require a new mindset and major change.

Victoria’s Secret is not permanently broken but it must listen to the market. It is missing market trends like lower prices and bralettes. Les Wexner has always been a retail innovator and can change the company strategy to improve the company by listening to the market and getting ahead of it which is what he has done during his whole career. The current sexy product line and stores needs to take account of consumer changes. The changes need to occur soon before Victoria’s Secret loses any more momentum.

Victoria’s Secret has always been about image. I think they should continue to focus on image, but a new image that is aligned with today. Women are still thinking about how they look and feel in their clothing. Comfort is more of a priority than it ever was. At the same time we still want to “look good.” It’s up to Victoria’s Secret to determine the definition of “look good” for its target audience and offer the products that fit that definition and their customers’ aspirations.

I think it’s wrong to focus on being out of touch when how to be in touch is the goal.

Bottom line is Victoria’s Secret needs to reinvent itself. Minor changes in the design or discount cycle isn’t going to give it a comeback. Instead VS needs to think about [what she wants] and create a service that moves her more than a teeny tiny panty set. Sex appeal was once the answer, but now it’s empowerment, inner beauty and self love.

If I was on the VS team, I’d close down stores that are performing notoriously low and open up new, fresh small format concept stores with a NEW NAME that breaths life and purpose back into the brand. I’d also bring in complimentary brands (i.e. Sage Wellness/Casper/Girlboss) with a better reputation that can help boost its image. People have to see the store in a completely new way to shift their mindset.

AMEN. Victoria’s Secret should keep the VS and Pink brands but also launch a new brand that focuses on female empowerment with cleaner lines and performance fabrics. Let’s hope that the smart people at L Brands can sense the need.

The sales data makes it clear — VS is losing touch with who their core customer is and what they want. I don’t think this is the beginning of the end for VS — they are still a giant in their segment and while they may be rapidly shedding market share to competitors, there is still time for them to turn things around.

It’s hard to imagine they are so out of touch with their image that no one at L Brands is thinking about this and planning to change. However, time is money, and the longer they wait to adapt their image, the more customers will leave the brand. While it may be a challenge to win a customer’s loyalty the first time, if they leave you, it’s much harder to win them back than it was to win them in the first place!

Low cost has always been a hallmark of Victoria’s Secret — even 25 years ago. So no BOGO or BOGT deal reflects badly on them.

The market HAS changed around them, but it’s far too easy to put blame on the #MeToo movement. The true challenges seem more deeply buried — partly because VS product seems out of date with the newer entrants.

And with that said, I just recommend that everyone read Billy Collin’s poem “Victoria’s Secret” based on the Victoria Secret Catalog. No answers, but it’s a great read. And he pulls a rather wry set of poetic language from product descriptions.

Braintrust
"Can it make a comeback? I think so, but it will require a new mindset and major change."

"I think it’s wrong to focus on being out of touch when how to be in touch is the goal."

"Sex appeal was once the answer, but now it’s empowerment, inner beauty and self love."