Nestle, Kellogg’s and others dump their DSD routes 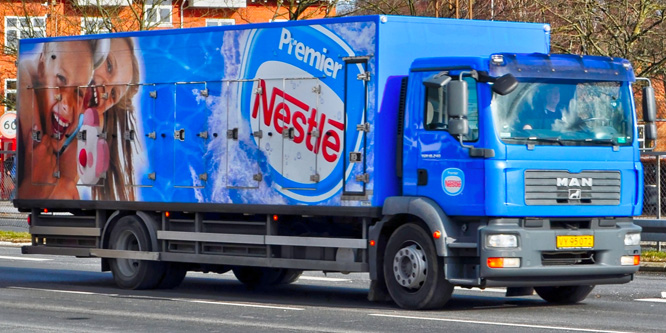 Nestlé U.S. announced last month that it was ending its DSD (direct store delivery) program for brands including DiGiorno and Skinny Cow in a supply model that seems to be about to disappear outside of bread, soda and beer.

Nestlé will instead ship goods to retailer distribution centers for them to move to individual stores — meaning lots of drivers, merchandisers and other staff will no longer be needed. Some 4,000 jobs will be lost as the operation covers 230 facilities, 1,400 trucks and 2,000 different delivery routes.

Despite cost reduction measures, the direct store model was too expensive, even once the company “reached the maximum point of efficiency,” Steve Presley, CEO of Nestlé USA, told Bloomberg.

“You can’t have that duplicative cost in the structure,” Mr. Presley added, referring to both a retailer and some vendors making deliveries to stores.

Paul Norman, president of Kellogg North America, said at the time, “We see the warehouse model as a clear advantage for us. In fact, we realize both higher service levels and share in the U.S. Snacks categories and channels that sell through warehouse distribution already.”

Snack giants Mondelez International and PepsiCo’s Frito-Lay both still rely on DSD, arguing it helps boost sales to have employees in stores stocking products and ensuring freshness — at least for now.

State laws often mandate DSD in categories such as beer and soft drinks. Bread makers still use DSD due to freshness and handling challenges.

DISCUSSION QUESTIONS: How would you rate the pros and cons of DSD (direct store delivery) for vendors as well as for stores? Could DSD still work if modernized?

Please practice The RetailWire Golden Rule when submitting your comments.
Braintrust
"Those companies that have decided to abandon DSD better be confident that the quality, freshness and merchandising standards will remain high."

"While eliminating DSD will reduce expenses, CPGs will lose in-store advocates for their brand."

"A store employee has many shelves to attend to — the Frito Lay driver has one mission in life and they do it very, very well."

8 Comments on "Nestle, Kellogg’s and others dump their DSD routes"

One of the benefits of DSD is ensuring that the manufacturer’s products are available for sale … arguably as retailer’s own supply chain capacity has improved this could become less critical.

What I wonder is, could this be in order to look at putting resources elsewhere — e.g. to enable direct to consumer orders and delivery, hence cutting out the retailer….

The answer is probably in the profit margins. The higher the margin on a range of products, the more likely that DSD will remain.

Unfortunately, the search for areas in the supply chain to cut has led to the decision to end DSD in many categories. The drivers and others whose jobs were eliminated are the sacrificial lambs in this new reality we call retail.

Can DSD be modernized or improved? Those companies that have decided to abandon DSD better be confident that the quality, freshness and merchandising standards will remain high, or they will be forced to find ways to modernize or somehow improve the system.

The DSD model has significant benefits for manufacturers of brands with high in-store volume, velocity, and require more constant attention to thrive. It also allows manufacturers to seek out other opportunities in store they would not see if going through the warehouse. For retailers, DSD may only be necessary for a small percentage of brands and likely gets in the way.

DSD or its equivalent is critical for products that depend on preserving freshness and fragility to deliver a quality consumer experience. A corporate career spent in the snack food industry taught that lesson well. But being a slow learner, I also participated in two very well funded experiments at challenging that premise. Only one was partially successful — and that was because the product really wasn’t all that fragile. Modern packaging materials and methods can somewhat overcome the freshness issues but the expense typically equals or exceeds the cost of DSD when you account for the 5-10 points of incremental retailer margin required for warehouse delivery. The closest any brand has come to solving both issues through packaging is Pringles, and the unique manufacturing and packaging equipment extract their own toll in that process. The final intangible is shelf maintenance and product presentation. Even with today’s tighter controls on planograms and inventory, you simply cannot consistently match the attention to shelf a DSD system provides in a store-stocking environment. A store employee has many shelves… Read more »
12
|
0
-   Share

Ben, you nailed it. If the presentation in store is not up to snuff, then the cookie starts to crumble and the shopper/consumer is disappointed and we all lose.

I am interested in the impact on these companies moving away from DSD and the expectation that most/all of their SKUs will be added into wholesale and retail warehouses. Frozen space is especially a premium and the impact of a Nestlé moving away from frozen distribution via DSD may create a huge reduction on their SKU mix at retail given tight warehouse space.

I remember when Kellogg made this move with their cookie/cracker business. Kellogg was not happy by the reduced numbers of SKUs accepted into warehouses and the reduced points of distribution.

DSD representatives are one of the few direct touch-points CPG companies have with customers. While eliminating DSD will reduce expenses, CPGs will lose in-store advocates for their brand.

Braintrust
"Those companies that have decided to abandon DSD better be confident that the quality, freshness and merchandising standards will remain high."

"While eliminating DSD will reduce expenses, CPGs will lose in-store advocates for their brand."

"A store employee has many shelves to attend to — the Frito Lay driver has one mission in life and they do it very, very well."