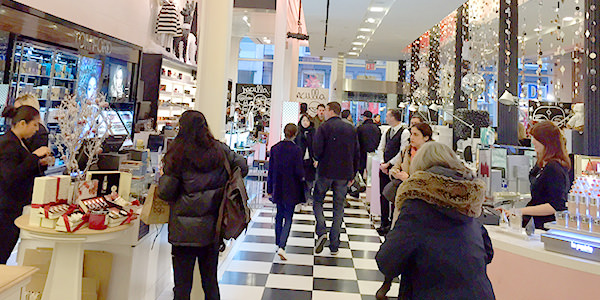 If the National Retail Federation (NRF) is correct, retail industry sales will be okay in 2015, just not as okay as the group originally thought when it issued its first forecast for the year.

Today, NRF issued an announcement that it is lowering its forecast for the year to 3.5 percent growth. The trade association previously said it expected sales to improve by 4.1 percent.

According to NRF, a slower than expected first half of the year is largely responsible for its revised projection. Sales during the first six months of the year grew at a 2.9 percent clip as a number of factors, some beyond the control of retailers, helped tamp down consumer purchases.

"A confluence of events, including treacherous weather throughout the United States through most of the winter, issues at the West Coast ports, a stronger U.S. dollar, weak foreign growth and declines in energy sector investments all significantly and negatively impacted retail sales so far this year, and thus have changed how future sales will shape up for the rest of 2015," said Jack Kleinhenz, NRF’s chief economist, in a statement. "Additionally, household spending patterns appear to have shifted purchases toward services and away from goods, though this may be transitory. Additionally, a deflationary retail environment has been especially challenging for retailers’ bottom lines."

NRF’s revised guidance comes at a time when unemployment continues to fall in much of the U.S. while wages continue to remain under pressure despite announcements by a number of large retailers and restaurant chains that they are raising the basement on entry-level pay for hourly workers.

Matt Shay, president and CEO of NRF, said, "We are optimistic that consumer spending during the second half of the year will benefit from recent improvements in the housing and labor markets along with lower energy costs, and believe consumer confidence will grow enough to bolster retail purchases for the year."

Do you expect the second half of the year to be below, in line or ahead of NRF’s projections? What makes you optimistic or concerned about the state of retail sales going forward?

Please practice The RetailWire Golden Rule when submitting your comments.
Braintrust
"The structural unemployment attributable to NAFTA persists. Sophisticated jobs go unfilled because our education system doesn’t produce enough workers skilled in technology. I predict we won’t see a bump until the minimum wage is increased."

"The lower expectation for the second half of the year may be the right one with extreme heat in the eastern part of the country and more flooding out west."

"This is the third or fourth year the wizards have predicted a great last half year. It is time to stop believing as it just never seems to happen."

There are several things at work here:

I predict we won’t see a bump until the minimum wage is increased.

The lower expectation for the second half of the year may be the right one with extreme heat in the eastern part of the country and more flooding out west.

There will be an improvement but not as much as in the original forecast. I am always concerned that at any time a major terror attack or multiple smaller ones will impact retail sales in the second half of the year.

I really don’t have a clue how the second half of the year will turn out. What I do know is the economy is always good all the time for good retailers. If you are really good at what you do, a retailer should see strong growth in sales.

I didn’t buy the overly optimistic NRF number in the first place, and even 3.5 percent for the full year may be on the high side. If you assume a 40/60 split between first half and second half sales (and 40 percent may be too low for some retailers), you would still need to hit almost 4 percent growth in the second half to achieve the forecast for all of 2015. It’s hard to see where 4 percent growth is coming from, based on the first-half trend.

For all of the positive macroeconomic metrics (especially the unemployment rate), we are living in an “age of anxiety” as far as overall sentiment and consumer spending are concerned. (Just look at the “right track/wrong track” survey results.) Not sure how to explain it, but retailers are showing some signs of strain as a result.

I think retail sales will pick up and even make up for the slow downs earlier in the year. Mainly because the U.S. economy is improving, job numbers are going up and people have spent less than expected earlier in the year. When the holiday season rolls around there will be more disposable income to spend than before.

We are dealing with a mature market with no driving forces. If I am a retailer, I am happy for 2 percent to 2.5 percent real revenue growth. Anything more than that will be reflected on a decreased bottom line because of additional price cuts or promotion.

Sales and growth will continue to be a battle as long as 100 million Americans remain out of work. True unemployment is still moving slightly up, which doesn’t bode well going forward. With government interference now a common occurrence, the economy will flutter and projections like this will be commonplace. Entrepreneurs will always help the free market, but there’s only so much a capitalistic process can do within a non-capitalistic government.

This is the third or fourth year the wizards have predicted a great last half year. It is time to stop believing as it just never seems to happen. Consumers are not going to wake up July 1 and say now I am going to spend money. The real world does not work that way. My concern is the economy is not working for the majority of people. Two part-time jobs does not equal one full-time job. Until the government stops killing the economy things will not greatly improve.

With the economies in Europe and Asia collapsing at a rate beyond any expectation the next few fiscal years may not fare much better than this one. The good news is that governments are beginning to realize that the economic misery index must be factored for the entire planet and so too is the means to make positive corrections. The improved relations with Iran and Cuba may be a little too little, or a little too late, but there will be positives that should encourage additional positive changes across the planet. Focusing on energy costs and per capita consumption rates will remain a primary stimulus for the necessary economic repairs needed now and for the foreseeable future. Retail must continue to seek growth by expanding their market radius and/or penetration. Adding new product categories to recovered shelf space brought about by eliminating slow-turn alternative product(s) is very effective for those with the will to endure a constant inventory vigilance. Margin and turn are the keys in that same order for survival and stability. Shipping, receiving… Read more »
0
|
0
-   Share

I am optimistic that retail will grow steadily for the rest of the year. Just this month we’ve seen innovation in terms of Prime Day (which generated a ton of revenue, despite the items that were on sale) and Jet just launched. We’ve got back to school and the holiday shopping season coming up, and they seem to start earlier and earlier every year. Even if consumers are buying more services than goods, I think that savvy retailers are very capable of turning things around.

Braintrust
"The structural unemployment attributable to NAFTA persists. Sophisticated jobs go unfilled because our education system doesn’t produce enough workers skilled in technology. I predict we won’t see a bump until the minimum wage is increased."

"The lower expectation for the second half of the year may be the right one with extreme heat in the eastern part of the country and more flooding out west."

"This is the third or fourth year the wizards have predicted a great last half year. It is time to stop believing as it just never seems to happen."