NRF Show attendees aren’t sure how 2017 will shake out 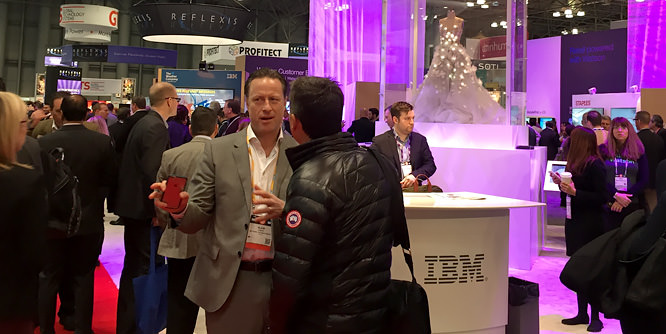 This week’s NRF Big Show marked the seventh straight year that RetailWire hit the floor at the Jacob K. Javits Center in New York City to ask show attendees in our own random and unscientific manner whether they were more or less optimistic about the industry’s prospects in 2017. After seeing modestly positive year-over-year improvements in mood for six straight years, this year we got … well, caveats.

Two big shadows are casting uncertainty over the industry — Amazon.com and Donald Trump.

In Amazon’s case, many said a tipping point may have occurred over the holidays with a significant number of consumers choosing the site to buy gifts. With more people becoming Prime members, attendees reasoned, they are choosing to order from Amazon and its marketplace sellers rather than other sites or nearby stores.

Amazon has momentum on its side, according to attendees. They pointed to its market capitalization, profits generated by AWS and its move into physical stores as causes for concern.

While many said a well-executed omnichannel response could stave off the Amazon threat (good news) they also questioned whether retailers had the vision, will and resources to do it (bad news).

Mr. Trump, whose inauguration is today, could prove a boon or bane to retailers. On the plus side, Republican control of the White House and Congress should lead to cuts in corporate tax rates and a reduction in environmental and other regulations seen as costly to business. Many expect the Labor Department to be more employer-friendly under Andy Puzder, CEO of CKE Restaurants, should he be confirmed.

As negatives, attendees pointed to the potential for import prices to increase substantially should a trade war break out with China or other nations that retailers rely on to produce the products that line their shelves. A few attendees also voiced concerns that a Trump administration will be less concerned about maintaining America’s strong dollar policy. While a weaker dollar would benefit exports, it would also drive up import prices. Concerns were also expressed about Mr. Trump’s policies on immigration and his temperament.

DISCUSSION QUESTIONS: What do you think will be the biggest factors affecting retail industry performance in 2017? Are you more or less optimistic about the industry’s prospects for 2017 compared to what you expected in 2016?

Please practice The RetailWire Golden Rule when submitting your comments.
Braintrust
"Notwithstanding the uncertainty about the new administration and the policies they may enact, I think people/businesses are ready to move forward."

"What I saw and heard the most about at NRF this year was digital and customer experience. Music to my ears."

"To paraphrase a former President’s campaign, “It’s the customer, stupid.”"

I wouldn’t say I’m optimistic. However, I am willing to embrace change. Generally speaking, change is good. We know there will be a lot of change in our industry one way or the other under the new president. Hopefully, it will be for the better.

Despite the challenges that remain in the industry, I am more optimistic about 2017. Notwithstanding the uncertainty about the new administration and the policies they may enact, I think people/businesses are ready to move forward. The retail industry still has all the same challenges that we saw in 2016, and these will persist, but I also think that pragmatism will be an important theme in 2017. Retailers need to remember that, while technology is a powerful enabler, they must execute the basics.

The somber mood pervading NRF2017 will be lifted as economic and trade uncertainties are alleviated. Retailers have worked hard in advancing omnichannel and many, having put some online infrastructure in place and wrestled with inventory visibility, will turn more attention to business building. When the going gets tough, the tough get innovative, and taking advantage of available approaches that increase the appeal of retail locations and make visits more memorable and worthy of consumers’ time can make 2017 an upswing year for brands and retail.

For me in our area, things are not very good. Our unemployment in the rust belt is very high, and we have an aging population, so it looks like difficult times as far as the eye can see. If you have a business in a good economic area then your opportunity to grow your business is encouraging. My job is to provide crazy insane value along with our perimeter fresh sections for us to succeed, and I’m fully committed to doing just that. As I and many others have said, it takes an outstanding level of customer service and unique products that keeps customers coming back, and the internet can not duplicate that. Rethinking your product line is important, as the e-commerce channels will focus on fast-moving products that will undercut your margins big-time, and the convenience of home delivery will continue to grow double digits for several more years. Stay sharp, attend your conventions, engage wholeheartedly with your customers, provide solutions for their needs and you will still turn a profit, even it is… Read more »
1
|
0
-   Share

To paraphrase a former President’s campaign, “It’s the customer, stupid.” The success of retail is largely tied to consumer confidence and the aggregate optimism — or lack thereof — of the purchasing public. I’m just not optimistic that that confidence will be there this year. I expect the divisive tone which has characterized America’s political, social and cultural context for past 18 months to continue at least through the early days of the the new Administration. In addition, President Trump will either succeed in driving his agenda and/or the Congressional Republican agenda to the degree that it is different and lots of the underpinnings of consumer confidence will begin to erode; or he won’t and the public will feel like they continue to be trapped in the political gridlock that has characterized the past eight years. So, for example, if the Affordable Care Act, Medicare and Medicaid are cut in favor of health care savings accounts, people will spend less. Ditto with the proposed cuts to Social Security. And it is still unclear to me… Read more »
1
|
0
-   Share

I believe that the window of opportunity for traditional retailers to deliver truly innovative initiatives is still open. Increasing investments to support applied innovation and not being afraid to do things that aren’t necessarily aligned with the core business’ profit model will be key. We are in disruptive times, innovations that are sustaining in nature may help to squeeze out a point or two from existing operations; what traditional retail needs is a step change, and the creation of net new high-growth revenue streams. I would also argue that retailers may not be able to go it alone and should consider strategic vertical and horizontal partnerships, to expand the possible.

The retail industry has always ebbed and flowed with consumer confidence. Our history has shown that while confidence can and does take some dives, we do seem to be a resilient lot and confidence is again restored.

With that said, what I saw and heard the most about at NRF this year was digital and customer experience. Music to my ears. I fear that many retailers still don’t really get what digital means but when they do, and learn that digital is about arming store associates and customers with the potential for great experiences, efficiencies and ease, then “we can go a long way, baby!” (am I dating myself with that one?)

The retailers I met and spoke with are “game on” and my 2 cents says they can do it!

Driven by consumer confidence, the retail industry performance, as a whole, in 2017 will be healthy. That said, adding meaningful jobs, a rise in home equity, tame inflation coupled with slow rise in interest rates, and continued rise in the financial markets will power consumer confidence higher.

However, the performance of individual retail segments and companies within the industry will vary greatly. Retailers need to position themselves to win in 2017. Their share in the growth will greatly depend on 1) the realization that the changes all around are not trivial or transitory; and 2) the speed and energy by which they pursue their digital future.

Retail has always been about the customer and giving them a reason to come back for more. Technology in the form of the internet, social networks, and mobile devices has changed the way people shop and what they expect from retailers. The faster retailers not just adjust, but fully embrace, the new retail reality, the more likely they are to share in the exciting opportunities ahead.

I am more optimistic for a steady growth trajectory for retailers that respond quickly to evolving shopper trends. That is what the successful innovators are doing. I think consumer confidence will grow as more investment in the country via jobs, infrastructure, etc. becomes even more apparent. Let’s see what happens. I know the world is watching!

Brick and mortar stores are still suffering compared to their online counterparts. In order for industry performance to improve in 2017, retailers must be open to change and take more risks. Amazon and Walmart are on the right track by attempting their new concept stores with Amazon Go and Scan&Go, respectively. Given the rate at which innovation travels, I’m also not highly optimistic, but with so many factors affecting the industry so drastically, it’s bound to be eventful.

There are still incredible opportunities to improve retail through innovation and inventory efficiencies. Shopping experiences can improve as retailers harness more and more customer data. Being able to sell products that partners stock for you can drive margin growth, which can then fund further innovation. There are so many examples of innovative change coming to retail that it is still an exciting time for our industry.

Braintrust
"Notwithstanding the uncertainty about the new administration and the policies they may enact, I think people/businesses are ready to move forward."

"What I saw and heard the most about at NRF this year was digital and customer experience. Music to my ears."

"To paraphrase a former President’s campaign, “It’s the customer, stupid.”"