Retailers get into Friendsgiving with Millennials 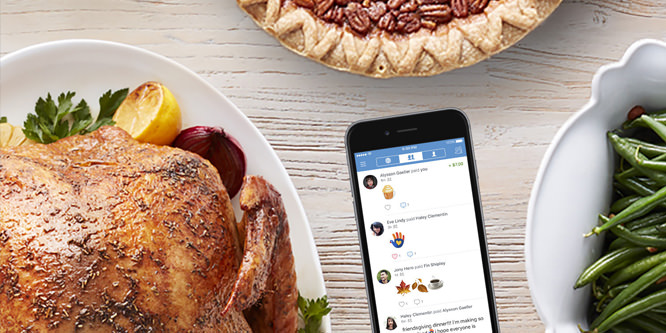 Friendsgiving, a newish pre-Thanksgiving holiday tradition created by young consumers on college campuses and in cities, is increasingly attracting marketers.

According a survey from Ypulse, 30 percent of 13-to-32-year-olds this year planned to participate in a Friendsgiving event, up from 20 percent in 2015.

“There are no real rules around what Friendsgiving entails,” said Ypulse in a blog. “The Millennials we interview mention everything from game nights to drunken potlucks. A perusal of Friendsgiving posts on Instagram shows pictures of takeout feasts alongside magazine-worthy autumn tablescapes. Regardless of what the gathering entails, the overall theme for all is doing things the way they like. No rules, just fun — and for some, an escape from family judgment.”

In November 2016, Old Navy, Gap and Banana Republic joined forces on a Friendsgiving event of their own, “featuring next level, oh-so-Instagram-worthy recipes, drinks, table decor and, of course, head-to-toe looks styled by a beloved set of Bay Area influencers,” according to a Gap press release.

Whole Foods, Tyson Foods, Target, Party City and Aldi are also among the retailers participating in the trend. Many have dedicated, Friendship-themed pages with products, recipes and entertainment ideas on their websites. Some stores are bringing out turkeys and Thanksgiving decorations as early as September in part to support the trend.

Mr. Cohen said it’s part of a larger trend of celebrating holidays with friends rather than solely family.

DISCUSSION QUESTIONS: What sales or marketing opportunities do you see around Friendsgiving? Do you expect the event to blossom in coming years? Does Friendsgiving offer a better engagement opportunity for retailers than Thanksgiving?

Please practice The RetailWire Golden Rule when submitting your comments.
Braintrust
"As this continues to evolve retailers need to keep an eye on its progression and try to have a little fun with it."

"Life is short. Be happy! Retailers might want to think about the holidays and gratitude in general to “capitalize” on it."

"Most retailers serve a community of interest ... nothing wrong with giving those cash register keys a workout at the same time."

14 Comments on "Retailers get into Friendsgiving with Millennials"

Who doesn’t love a great Friendsgiving? It’s the one time you can actually cook over the holidays and make a main dish or side that you actually want to. When Millennials go back to a family holiday usually all the good feastings are claimed by the aunts, uncles and parents and what is left over is just opening the cranberry sauce out of the can … As Millennials continue to enjoy cooking, trying unique recipes and having roommates into their 30s I expect Friendsgiving to continue to grow.

For retailers to capitalize on it they need to utilize social channels as they have done in the past but also offer unique ideas and some additional buzz or excitement to this new holiday (a new must-have dish, style/fashion or music/dance). As this continues to evolve retailers need to keep an eye on its progression and try to have a little fun with it.

I love the concept of Friendsgiving and see many opportunities for marketing through fun and personal experience. Retailers can treat the event like other promotions, but they must be creative in capturing the meaning. I can see a lot of two-for-one buying deals that let you buy one product for yourself and one for your friend — like meal kits, for example. Retailers can have fun with this. It is a naturally warm and engaging concept so be creative and put together the right Friendsgiving program for your business. If done right, I can see this taking off and being very successful.

Well, thank God we now have a name for getting together with your friends during a holiday period before or after you have to suffer through family obligations. Since “Friendsgiving” entails everything from, “game nights to drunken potlucks,” I guess the marketing opportunities are almost endless. But wait, hasn’t the beer industry been suggesting friends get together at the holidays for years? Friendsgiving still feels a little more like Mother-In-Law Day than a real “thing.” Of course people can promote it, but why not extend the idea of hanging out with your friends over a good meal or a “drunken potluck,” from before Thanksgiving through Super Bowl Sunday? I mean … isn’t that what we do now?

I agree. Since Friendsgiving has no particular definition it really encompasses any time friends get together during the holidays. If it becomes a particular time period with a definition, Millennials are likely to reject it. I don’t think the term has legs. However, marketing ideas and products for events with friends can be a year-long activity.

Retail locations inherently gather like-minded patrons with at least one thing in common, so events in retail can be a key differentiator. My brother and I will drive almost an hour this Friday evening to enjoy a cigar with each other and a fall get-together with others who enjoy a cigar. Will I stock up while there? Absolutely, buy gifts — certainly, all while supporting this particular family-operated cigar shop. Most retailers serve a community of interest and can do more to position themselves within it. Nothing wrong with giving those cash register keys a workout at the same time.

What’s funny is that the description of “Friendsgiving” is exactly what Thanksgiving has always been in the household I grew up in (in the 1960s) and what we keep it today. (NOT the drunken parties — to be clear. 🙂 )

To make it a thing of “Millennials” looks like overt trend creator creating another shiny bauble to distract us from the more important day-to-day activities of marketing.

Talk about pretentious! Friendsgiving is a made up term for an age-old tradition of friends celebrating Thanksgiving together before going off to be with family. Sure there are marketing opportunities, but this is not a new thing. Move on please, nothing to see here!

This is a terrific way to play off Thanksgiving without cannibalization while capturing a shift to a less stressful mode of self-expression.

Friends are taking on an extended family type of a role in the lives of Millennials and Gen Z. The lack of explicit rules and traditions make this an expression of freedom and assertion of one’s independence.

Marketers need to be a friendly voice helping participants realize their own freewheeling independence and uniqueness. It should not be prescriptive or instructional, as in a “how to do Friendsgiving” offer, rather marketers should explore how enable partnering to making each event special and fun.

I abandoned family Thanksgiving for “Friendsgiving” (or even “orphan Thanksgiving” for people whose relatives were elsewhere) more than 20 years ago. I LOVE it. For me, Thanksgiving is a ritual tribal harvest feast … and while I’ve settled into my non-familial “tribe” over the past decade, I totally enjoyed having dinner with people I’d never met … who solely had one friend in common.

Life is short. Be happy! Retailers might want to think about the holidays and gratitude in general to “capitalize” on it. So far, only Publix and TJ Maxx have remotely put that message out there. That’s just dumb.

I like the idea of starting new “trends” to bring people together whether we are speaking about friends or family members. Can retail add to this new trend? Yes. How they do it is yet to be determined. Maybe a retailer will have to experience it first before knowing how to bring it to their individual market place.

Friendsgiving has embodied the holiday spirit more for me than Thanksgiving ever has. I think personal family dynamics play a major role in how a Friendsgiving is perceived. With that said, I do believe the retail impact could be profound with retailers (especially grocers) having an outstanding opportunity to help friends make amazing meals. As Millennial budgets increase and tastes are refined, I see Friendsgiving becoming a staple around holiday season with retailers playing key roles in bringing these events to life in new and unsuspected ways.

Friendsgiving is only going to get more popular — it takes all the best elements of Thanksgiving (food, loved ones, drinks) and leaves out all the bad ones (awkward family political arguments, forced conversation, dress clothes). This gives a great opportunity for retailers to appeal to younger crowds by offering Friendsgiving recipes, table decor, outfit ideas, games to play, cocktail recipes … the list goes on.

Thanksgiving is all about family and isn’t always looked forward to, but Friendsgiving is something people CHOOSE to do. This choice means they want to see more inspiration and ideas surrounding it because it’s something they want.

Big family gatherings are on the decline, so the natural evolution is to be with friends during the holidays. This presents a wealth of opportunity for retailers, and this trend will continue to grow in the next few years, as I see it.

With the political landscape as divisive as it is, no wonder people are looking for a more relaxed alternative to dinner with the extended family! The recent Wall Street Journal piece about retailers offering more practical workshops and classes to lure in the oh-so-desirable 26-year-old demographic makes me wonder: is there a way to make Friendsgiving a learning experience? A cooking class to learn to cook your first turkey? (Daunting to me as a Millennial). Beer tasting or drink-mixing classes to pair the right craft beer or cranberry cocktail with your bird? Seems like you could offer an Instagramable meal kit OR a gathering space for the friend group (complicated in expensive cities with small apartments).

Braintrust
"As this continues to evolve retailers need to keep an eye on its progression and try to have a little fun with it."

"Life is short. Be happy! Retailers might want to think about the holidays and gratitude in general to “capitalize” on it."

"Most retailers serve a community of interest ... nothing wrong with giving those cash register keys a workout at the same time."