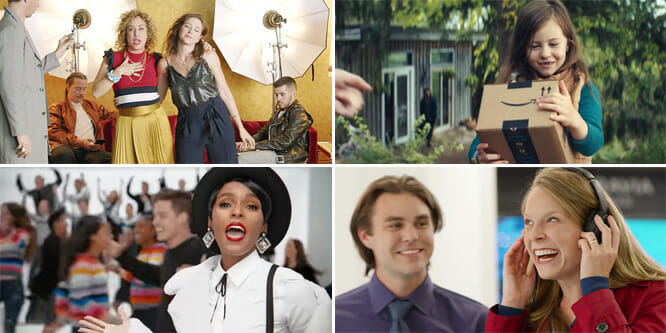 After six weeks of head-to-head competition, it’s time to pick this year’s winner of the RetailWire Christmas Commercial Challenge. The winners on a week-by-week basis include:

Nordstrom’s “Choir! Choir! Choir!,” which won its week one matchup with Macy’s. Dick Seesel, principal, Retailing in Focus, said the spot sent “an upbeat, accessible message celebrating its own associates (which are a key part of the store’s brand ‘formula’)”.

Week two saw Big Lots beat Kohl’s. The discount retailer’s “Share the Joy” commercial was praised by Neil Saunders, managing director, GlobalData, for being “personal and intimate” and celebrating “the importance of family and friends.”

Week four saw Gap’s “To Making Music and Magic. To Perfect Harmony.” receive kudos from RetailWire’s BrainTrust and crush H&M’s spot featuring Nicki Minaj. Jeff Miller, director of marketing, OceanX, said, “The Gap commercial is catchy, says that they have what I need and even (wait for it) shows the products they are selling.”

Last week’s matchup went to P.C. Richard & Son over Best Buy, although commentators only seemed to see it as the slightly better of two uninspiring spots.

DISCUSSION QUESTIONS: Which of the weekly winners in this year’s RetailWire Christmas Commercial Challenge do you think was the most effective? Why?

Please practice The RetailWire Golden Rule when submitting your comments.
Braintrust
"Home Depot is most effective — it has a good message, is entertaining and shows their product(s) being use to provide more Christmas-y gifts."

"Overall it’s Home Depot for me — it brings the build-up to Christmas."

"All were entertaining but Amazon was great at bringing home the end-end benefit — giving a gift that thrills/excites."

I’ll stick with the Nordstrom spot. Not the most creative (arguably that honor belongs to Amazon), but very effective in highlighting both its associates and its merchandise in a warm-hearted way.

I’d be remiss if I didn’t single out Walmart’s yearlong campaign that culminated in some smashing holiday ads — even if they weren’t part of this year’s competition!

I’m going with Amazon — all were entertaining but Amazon was great at bringing home the end-end benefit — giving a gift that thrills/excites.

My vote goes to Amazon. The spot emphasizes the best aspects of its brand (speed, ease, variety) in a fun spot. The campaign seemed to work, as Amazon’s holiday sales soared.

Overall it’s Home Depot for me — it brings the build-up to Christmas.

So many feels. It’s Home Depot for the win!

Amazon gets my vote with Home Depot a distant second. Amazon takes us on a ride from order to delivery.

Thin gruel: as was noted at the time or “times”… each week, all of the ads seemed to place an emphasis on “WOW!” at the expense of actually doing what an ad is supposed to do: make you give your $$$ to a particular company.

Oh for the ads of my childhood that actually accomplished both!

I voted for Home Depot despite the fact I think it gets very lost when the story leaves Home Depot and enters a world of Kohl’s. But it is fundamentally good. Overall I was quite disappointed by the entire array of ads. They showed a blandly uniform group think among the agencies — emphasizing “feel good” movie making and de-emphasizing the fact it’s an advertisement. And that never drives good results — short term OR long term, in my experience. Let’s go back to the fundamental premise of creative advertising: If you take the brand out of the ad and it still works then it’s a failure. On that basis, these were all swappable – even Home Depot’s despite a decent start. The Gap ad had some good uniqueness – but it opens like an Old Navy ad with what looks like Old Navy clothing. So they fail. The Amazon ad was most unique…except swap the packages for packages from Walmart, Nordstrom, or anyone else and the ad still works just fine. So it fails the… Read more »
0
|
0
-   Share

I’m going to go with Amazon on this one. They were able to create a sweet story around their product offerings, showing how easy it is to get the perfect gift for a loved one and put a big smile on their face.

Amazon for the win! Best use of memorable music, imagery and “feels” to reinforce the brand message of Amazon and giving.

My vote goes to Nordstrom. Their spot is personal, creative and it really represents the Christmas spirit.

Braintrust
"Home Depot is most effective — it has a good message, is entertaining and shows their product(s) being use to provide more Christmas-y gifts."

"Overall it’s Home Depot for me — it brings the build-up to Christmas."

"All were entertaining but Amazon was great at bringing home the end-end benefit — giving a gift that thrills/excites."