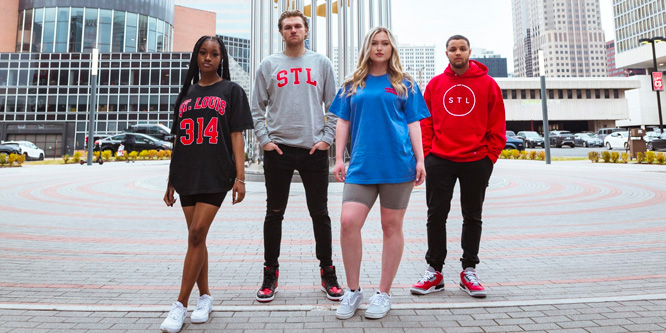 Regional grocer Schnuck Markets’ latest store concept experiment will let customers get themselves fashionably outfitted while getting their groceries.

Schnucks announced it would remodel of a St. Louis location, adding space for an Arch Apparel store-within-a-store, according to Supermarket News. Arch Apparel is a St. Louis-based streetwear brand with a variety of products featuring designs that demonstrate hometown pride, such as STL logo shirts. Even the company’s name references the city’s iconic Gateway Arch. The brand also involves itself in a variety of local community-centered activities.

Schnuck Markets is not the only grocer to add some local flavor to its assortment with an apparel partnership.

Midwest grocer Meijer recently announced a new apparel partnership bearing some similarity to Schnucks, although it is not set up as a store-within-a-store. The grocer has begun stocking an exclusive line of clothing from Merit Goodness at two Detroit locations, consisting of Detroit-themed hoodies and t-shirts, Hour Detroit reported. Twenty percent of profits from Merit Goodness go to the brand’s affiliated non-profit, which helps Detroit high school students go to college. Prior to the Meijer deal the brand was only available online and at a limited-run pop-up.

Other regional grocers have also piloted store-within-a-store concepts for non-grocery selections — both in and out of apparel. Hy-Vee introduced DSW shoe shops last year inside its stores with plans to add them in 120 locations. This year, the grocer also partnered with W Nail Bar to offer in-store manicures, pedicures and a variety of other salon services in select stores.

The Arch Apparel deal is not Schnuck Markets’ first experiment with a store-within-a-store setup that promotes a local St. Louis vendor. The grocer partnered in 2017 with Volpi Foods, a local specialty meat producer, to open an in-store shop operated by Volpi employees featuring the brand’s artisanal cured meats.

Schnucks’ remodel will also include a new food hall featuring service counters from a number of popular local restaurants, according to Supermarket News.

DISCUSSION QUESTIONS: Do you see a lasting trend in supermarkets partnering with non-grocery brands on store-within-a-store concepts? How can grocers that pursue these types of partnerships make sure they’re making the right move?

Please practice The RetailWire Golden Rule when submitting your comments.
Braintrust
"Yes! What’s not to love?"

"It’s not that everyone is interested in shopping for clothing at the grocery store, it’s the appeal of local pride. That is a perennial motivator for swag."

"Combining common feelings of community and shared identities in products that elevate the spirit is a huge win."

Grocery stores are going to find themselves with unproductive square footage as e-commerce and delivery programs siphon off foot traffic. But grocery stores will still have a very high frequency of visit numbers. So available space + high foot traffic = non-grocery opportunities! Sounds like opportunities galore!

I most definitely see this as a plus. It gives people a reason to stay longer in the store. Whether it’s a shoe shop, a nail salon, an athletic/streetwear store, etc. This is something I don’t see ending anytime soon.

I would love to see grocery retailers experiment with regularly rotating pop-up stores, to keep up an element of surprise and the customers excited, instead of a static store-within-a-store.

Agreed Venky — especially if they are defined spaces that feel more intentional than a cleared out area with a seasonal display.

Yes! What’s not to love? This reminds me of the DSW/Hy-Vee partnership, an everyone-wins arrangement that gives customers yet another reason to go to the grocery store.

I love the DSW partnership. And I have always wondered why Albertsons’ test of Ace Hardware stores-within-a-store never went anywhere, it sounded like a great partner alliance.

It’s not that everyone is interested in shopping for clothing at the grocery store, it’s the appeal of local pride. That is a perennial motivator for swag. Good on the grocers who saw the opportunity and jumped to own it.

As a St. Louis native, I can attest that Schnucks has been exemplary in supporting (and experimenting with) local businesses. From inviting local brewers and distillers, like Stumpy’s, to run pop-up sampling tables, to carrying a co-op pizza line, to gifting their grocery employees $200,000 in gift cards to St. Louis restaurants struggling through the pandemic, Schnucks really leans into being a *local* grocer. We in St. Louis are pretty proud to not be riddled with Krogers or Publixes, and Schnucks is smart to be feeding the STL-proud mindset — especially as it was recently announced Amazon is looking to open one of its first grocery concepts in St. Louis County this year. Local support feeds loyalty when done in innovative, consistent ways.

Agreed Luke — Schnucks is pretty tuned into STL, and as a consumer, I can tell you that their initiatives partnering with and supporting those within their own community is a much larger contributor to my loyalty than their 2% back rewards program.

Last year showed us the importance of grocery stores as essential businesses within each community, thus catching the attention of every brand and retailer who was forced to close stores last year. These partnerships are a big win/win — companies benefit by diversifying their link to customers in case of future unforeseen events, and reducing online fulfillment costs by adding pick-up and return points closer to the customer. Groceries not only fill empty space in stores, but rebuild in-store traffic by enticing customers to shop in-store rather than online, and to visit more often. It used to be location was the best indicator of retail success. Today it’s not only location as the key driver of retail success, but also who has the best ecosystem of products and services that customers want. Grocers are ideally positioned to benefit.

This is interesting, especially in an industry where linear footage productivity is everything. Because so many stores have turned to this outpost idea, it better be good — and not just reflections of other stores’ attempts of the same. That could disappoint shoppers, which no one wants to do. I’m yawning at this one.

Combining common feelings of community and shared identities in products that elevate the spirit is a huge win. Bringing that offering to the community square – the local grocery store – taps a significant number of shoppers on their daily or weekly rituals.

I couldn’t agree more! Living in Knoxville, you literally cannot walk into ANY store (Kroger, Walgreens, CVS, Publix, Weigel’s c-stores, ACE Hardware, the list goes on and on) without seeing UT Vols merchandise. And the local shoppers love them for it, even transplants who went to other schools — even other SEC schools! Showing affinity for local icons is a great way for any retailer to associate with the community. And the impulse buys, coupled with the very high margins of wearables and other paraphernalia, usually make the space utilization a winner too.

Grocery stores already have store-within-a-store concepts. I’ve seen bank branches, coffee shops, dry-cleaners, salons, and QSR. But those concepts are organic to the shopping behavior of consumers, they make sense.

Other than sports-team themed seasonal promotional items, apparel shopping behavior is not based on convenience and I wonder how many consumers will want to sport fashions that are obvious grocery brands.

Braintrust
"Yes! What’s not to love?"

"It’s not that everyone is interested in shopping for clothing at the grocery store, it’s the appeal of local pride. That is a perennial motivator for swag."

"Combining common feelings of community and shared identities in products that elevate the spirit is a huge win."