Shake Shack founder says, ‘Do it. Don’t talk about it (sustainability initiatives) until asked.’ 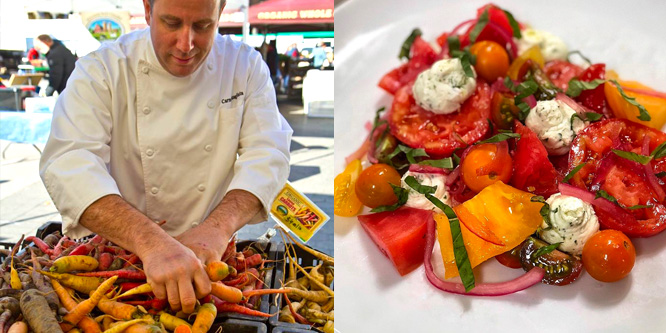 For instance, Union Square Café, his first restaurant, opened on 19th Street in 1985 because it was a block away from Union Square Park’s farmers market. French chefs went to farmers markets every morning to secure fresh ingredients and he “thought the food would be better” if his chefs did the same. He also knew that doing so held the added benefit of supporting local farmers.

His restaurants banned smoking 12 years before New York City did so because he didn’t want patrons going home “smelling like an ashtray.” His no-tip policy in 2015 focused on establishing “a more sustainable labor model” as wages for servers and bartenders had grown exponentially higher than cooks

His chefs have removed BLT from the menu in certain months because tomatoes are out of season and did away with filet minion because the whole animal couldn’t be used. Plastic straws were removed after one of his children showed him pictures of tortured sea turtles. He said of his kids, “Every time we don’t do the right thing, we hear about it.”

Indeed, sustainable choices are about “doing the right thing,” he said.

Getting the sustainability message out is more challenging. “Local” and “seasonal,” he estimates, is written on 80 percent of restaurant websites.

Even though he has taken these steps, Mr. Meyer’s rule is to refrain from talking about sustainability efforts “unless they ask.” A lesson about withholding information until people are ready came in his early days running Gramercy Tavern. Extensive knowledge on the wide range of cheeses available was shared after meals, but Mr. Meyer found a majority of diners felt the servers “just wasted 12 minutes of my life.”

At the same time, Mr. Meyer noted with recipes easily found online, a restaurant now has to stand out for more than “great food,” and one aspect could be sustainability. He said, “The thing that‘s going to make you fall in love with a place is to have stories. When you leave there, you feel better and we left you with something that you can share with your friends.”

DISCUSSION QUESTIONS: What lessons might retailers and brands learn from Danny Meyer’s approach to sustainability and transparency? Do you think a “don’t tell until asked” about sustainability rule makes sense for consumer goods and retail?

Please practice The RetailWire Golden Rule when submitting your comments.
Braintrust
"I think 'don't tell until asked' makes sense for retailers and CPG companies, for lots of reasons."

"People notice when a brand or business follows sustainable practices and the word-of-mouth advertising they use to share their experience can be priceless."

13 Comments on "Shake Shack founder says, ‘Do it. Don’t talk about it (sustainability initiatives) until asked.’"

I totally understand Danny’s sentiment, but might disagree slightly. I go with “talk, don’t brag or preach.” Conversation and awareness is important for establishing social norms when it comes to sustainability.
This is especially true for large players, whose policies have the ability to influence a much wider shift in behavior for their industries.

If you’re in retail – or any other type of business – study what Danny Meyer has done. Any type of business can learn from his experience. As you hear what Danny has done, it’s not that he’s invented any of these ideas. But he’s been more deliberate and intentional about them. And he doesn’t have to put customers through 12 minutes of education for them to know he does this, unless they ask. That said, I do believe it’s important to tell your story, especially if it’s one that will resonate with customers. You just don’t have to take valuable time away from the customer’s experience, unless they want that to be part of their experience. To paraphrase the “don’t tell until asked” comment … “It’s okay to tell, just don’t elaborate until asked.”

I think Danny Meyer is right. Too often companies role out “sustainability initiatives” or some other values-based campaign without: a.) making sure they are actually compliant with whatever principles they are touting; b.) thinking about how inauthentic it sounds to boast about doing something you should have been doing all along; or c.) appearing to be the corporate slow kid on the block who finally got the message. Better for a brand to have “discovered virtue,” i.e., the right when questioned to say “Oh yes, we’ve been doing (fill in the blank) for five years,” than to say, “We just discovered (fill in the blank) and we promise to start doing the right thing.” P&G’s conference was held this year. Rachel Carson’s “Silent Spring” was published in 1962 — so where have they been? Also contrast Meyer’s approach with P&G’s. The conference was called the, “Cleaner Products Cleaner Future Summit,” and significantly not the, “Clean Products Clean Future Summit.” So the goal is to be better, but not be good in the same way that… Read more »
2
|
0
-   Share

Do it! Talk about it! Then others will change and, more importantly, people will not only understand the value, but also understand that it is OK not to have tomatoes in the winter.

But be sure that if you talk about it, you really are doing it.

I applaud Danny Meyer for letting his establishments spread the word on sustainability though quality food made with locally sourced ingredients. It appears that these establishments support sustainable design practices, too. For instance, Shack Shake restaurants feature dining tables made of reclaimed wood from bowling alley floors. Quality ingredients and attention to details like this are where storytelling begins. People notice when a brand or business follows sustainable practices and the word-of-mouth advertising they use to share their experience can be priceless.

I just can’t totally buy everything Danny Meyer is selling. It’s great to talk about sustainability and clean food and all (all the while saying you aren’t talking about it) but when a double cheeseburger alone has as much sodium as is recommended an adult get for a whole day, it makes me suspicious about the other claims he makes.

All the more reason NOT to make claims, as Meyer suggests.

Take my example of “better for you” as opposed to “good for you” foods. The first thing critics do when a company announces any initiative is find all of the counterexamples in the company’s daily practice. For example, companies that boast about diversity in hiring shouldn’t have all white, male boards or only a small number of “diverse hires” in key executive positions. Ditto for “better for you foods” — think of “low sodium” soy sauce that still contains 24 percent salt. And so on, and so on.

What Meyer is advocating lets critics “catch him doing something right.” He isn’t claiming to be perfect, just better than his peer group. People give quiet first movers more credit than they do, “late to the party and still not dressed right” businesses.

I was just thinking the same thing. Many customers want great tasting dishes, without the lecture. No one I know wants to purposely prepare a lousy dish of food. But no tomatoes in the winter, really? I want my BLT year round and if they won’t carry it I’ll find a place that will, and most folks that I know feel the same way.

The goal is admirable but common sense must rule, and I applaud the no smoking initiative for sure, which again is common sense. Run a very clean establishment, provide great food with great service and you will be successful. If the customer wants to know more then engage with a brief answer and move on.

Actions speak louder than words. There’s a difference between doing something because you care about it and doing it because others care about it or because it will soon be required by law. I applaud the efforts. And consumers notice. They will do the talking.

The lesson here is that it’s ok to tell your story when you know it will resonate with your customers and target audience — just don’t go overboard and give a 12-minute dissertation about it. Customers who want to know the details will ask. Customers who just want to know you’re doing the right thing might not. And they’re fine with that!

Often times brands think that the message within the story is so important, they go too deep in talking about it and that can have the opposite effect on customers, turning them off the brand. Yes, there is a balance and every brand needs to find it for their customers.

Danny Meyer has long been ahead of the curve for not only local sourcing and transparency, but also for other important lessons that retailers and brands should heed better than they currently do. His book, “Setting the Table” is a great illustration, including the stories referenced here, but they go further into what (he thinks) makes for great hospitality.

It is great hospitality that retailers and brands need to learn and the point is perfectly made in the quote Tom used at the end of the piece above: “The thing that’s going to make you fall in love with a place is to have stories. When you leave there, you feel better and we left you with something that you can share with your friends.”

If more brands and retailers did this, the retail world would be a far better place.

I saw some organic beer the other day. Oy. Greenwashing is so prevalent today I’m not sure most people don’t even notice anymore or aren’t buying the marketing. It’s become the new “reduced fat” from a few years ago. Ultimately though, Danny’s right, do what you think is right, but just do it, don’t talk about it. Those “in the know” will notice and those that don’t care, well, they don’t care!

When the changes you make as a brand are “intuitive” and done for the right reasons, then I see nothing wrong with telling customers about that policy. Don’t over-promote, but realize that people value authenticity and moves made that coincide with core brand promises.

Braintrust
"I think 'don't tell until asked' makes sense for retailers and CPG companies, for lots of reasons."

"People notice when a brand or business follows sustainable practices and the word-of-mouth advertising they use to share their experience can be priceless."