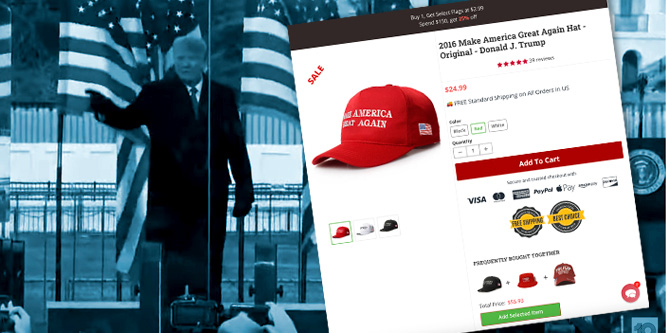 Shopify announced yesterday that the platform is removing all online stores affiliated with Donald Trump’s campaign for president and the Trump Organization for violating its policies prohibiting users that promote or support organizations that advocate violent activity.

The Canadian online platform took its action a day after Mr. Trump spoke to a group of supporters in Washington, D.C. and continued to promote allegations that the recent election was stolen from him and them.

Those listening to Mr. Trump’s speech near the White House moved to the Capitol Building where they overran police. Around 50 officers were injured as they sought to hold back rioters. One member of the Capitol Police, Brian Sicknick, lost his life while sustaining injuries received as he “physically engaged” with rioters during the melee.

Shopify issued a statement that it “does not tolerate actions that incite violence” and that Mr. Trump’s behavior had violated its policy, “which prohibits promotion or support of organizations, platforms or people that threaten or condone violence to further a cause.”

The Retail Industry Leaders Association and others have come out to condemn Mr. Trump for inciting the Capitol Building riot. The group, which represents the largest retail chain operators, said, “It’s time for men and women of goodwill in government to denounce the conspiracy theories and cancerous rhetoric employed by those cravenly attempting to capitalize on political chaos. All those trafficking in sedition must be rebuked.”

Trump merchandise is still available on other online platforms and marketplaces operated by Amazon.com, Target, Walmart and others.

DISCUSSION QUESTIONS: Do you agree with Shopify’s decision to remove online stores affiliated with the Trump campaign and Trump Organization? Should other online platforms and retailers follow suit?

Please practice The RetailWire Golden Rule when submitting your comments.
Braintrust
"I think this is a bigger problem for retail, and it is remarkably similar to the problems facing social media platforms."

40 Comments on "Shopify dumps Trump’s stores from its platform"

This issue, unfortunately, is too political and not enough business. Maybe this is not the forum for this topic.

C’mon Bob, this is an issue that every retailer faces. Should we not be addressing the pros and cons? Maybe we can give some CEO some guidance in her/his decision.

EVERY retailer? C’mon Gene: 99% of businesses don’t (have anything to do with Trump … even at the vaguest level). As for Bob’s point, I think it treads the line: legitimate for discussion, but hardly essential.

Craig, it is not a Trump issue. It is an issue of how far retailers should go in promoting or making available products that are connected to causes that support philosophies that are abhorrent to accepted civilized values.

Thanks Gene, it sounds like all three of us might have phrased our responses better (looking at the feedback I know I could have!) What I meant — and at the risk of putting words in his mouth, I think Bob did as well — was that while many businesses face the ethical issues you mention, very few actually deal with it in the context of dealing in Trump-related merchandise.

So addressing the general question would have been more useful than sticking with this specific situation.

I agree. The issue is far reaching.

Research from Morning Consult finds that 63 percent of voters (85 percent of Democrats and around 40 percent of Republicans) blame President Trump for the events of Wednesday.

Fifty percent say they have a more favorable view of companies that have condemned Mr. Trump’s actions and 43 percent are more likely to buy from them as a result. The research also found that 38 percent of Republicans would have a more favorable view of brands denouncing those involved in the riot. Another 30 percent of GOP voters said it wouldn’t have an effect one way or the other.

All of the above suggests that there are clear business implications for companies that choose to say or do something or not. It’s up to our expert panelists, such as yourself Bob, to weigh in on the relative pros and cons of such actions.

Boy oh boy! Did someone start something here today! I have never gotten so much attention from so many with so many comments (and negative votes). I cannot be lured into a political discussion although I have plenty to say about the recent events and none are complimentary.

I couldn’t disagree more. This is the exact forum needed for this discussion. I am not a top executive or a member of senior management of a company. I am just your average every day grunt worker for a grocery store, and your average every day consumer. I follow Retailwire because I am interested in how retail businesses operate from top to bottom, and what the industry experts have to say. It has provided me with a lot of insight, especially helping me to decide where I will or will not spend my hard earned paycheck. I thoroughly research companies before I shop with them to ensure that their mission statements align with my personal views. Those views never included the political affiliations of the company until Donald Trump became President. There is no excuse for what took place this week at the Capitol, and Trump is responsible for it, just as he is responsible for the great divide our country has become during the past four years. I applaud Shopify for their decision. I… Read more »
6
|
-2
-   Share

I would like to add that “Ben & Jerry’s calls to ‘impeach’ Trump in forceful statement about Capitol riots.” Yet another company I have done business with because of their quality products and mission statement, but due to this announcement, I will now overindulge myself in a container of Chunky Monkey.

I absolutely agree. Five years ago Walmart, Amazon, and others stopped carrying Confederate flags for a reason. This is no different. Unless, of course, you want to be associated with a man seen as treasonous by most of the world.

I am all for this decision as long as they follow through with all organizations that have an underlying theme of “threatening or condoning violence.” To pick the Trump stores alone is patently wrong. Be sure there are other organizations selling their wares that support and condone violence with their beliefs.

My personal concern is that those sites will morph into having more aggressive positions in the next four years (or more). It appeared to me that the rioters that Trump encouraged had no agenda but violence. They are chest-beaters and flag wavers (whatever flag that may be), and don’t propagate one iota of substantial belief or even opinion.

It’s a tough one, for sure. I’m not a supporter of anything Trump but I’m also not a supporter of the far left “cancelling” people or organizations because they don’t agree with their stance. Ultimately, however, the line was crossed into violence and that was incited by Trump. Neither he nor his supporters should gain financially from that.

And who the heck wants to encourage this kind of insanity in any way?

Free speech sometimes has unintended consequences. And then there’s consistent, on-going, malignant, malice-filled speech. Lines are crossed, frequently and egregiously. And bad outcomes predictably unfold. So yes, there comes a time when enabling and supporting platforms have an obligation to pull and disassemble that support. It’s long past time when some doors should be slammed shut on incendiary behavior.

Well, after my comments yesterday, I can hardly stay away from this one! It’s an easy move to make on January 7 and, in my opinion, justified. But now that Trump has put out a statement in effect conceding, Shopify is going to enter a gray area that will be very challenging – has the organization redeemed itself now in terms of their policies? If the organization or any of its representatives then reverse themselves and start repeating old debunked conspiracies (or starts spinning new ones), does that put these stores back in violation of Shopify’s policies? I think this is a bigger problem for retail, and it is remarkably similar to the problems facing social media platforms. Who ultimately bears responsibility for what individuals in the community do? Should Amazon be held accountable if a third-party seller is able to sell goods on the platform that are toxic or dangerous or that they are not licensed to sell? Should Shopify be held accountable if it enables sellers that support terrorist or seditionist organizations? I… Read more »
14
|
0
-   Share

Well said Nikki. This is a big topic that is bound to play out this year.

100 percent. This is a fundamental question of leadership and, actually, what should be a relatively easy decision. Haven’t we seen what happens when (some) people prioritize profit over democracy?

More specifically, Shopify needs to think about its customers – the businesses and their end-consumers, as well as their employees and other stakeholders. Good for them.

Shopify’s decision was right for Shopify.

Its Millennial and Gen Z audience seeks purpose-driven brands that take bold stances. These consumers speak up for diversity, equality and respect because they are the most diverse cohorts in history.

Without a doubt, retailers are weighing the costs and benefits of their next steps. Even Facebook now recognizes the purchasing power and social influence these consumers wield. Facebook just blocked Trump posts and it could extend similar measures to its growing shopping platforms.

It isn’t just the Millennial and Gen Z audiences that seek purpose-driven brands, etc., it is us Baby Boomers as well. We may be old, be are not dead yet, and as we age we are forced to live on more limited incomes, and are much more aware of whom our dollars support.