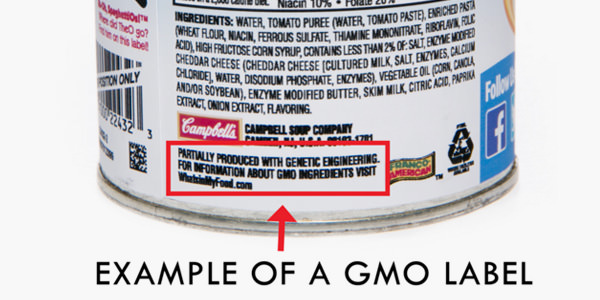 The company has made the calculation that it should support a national standard because: a) consumers support including labels that list GMOs and; b) because the action removes the spectacle of 50 states passing their own labeling requirements. Campbell Soup has pointed out that its support for a national label standard does not mean that it has changed its opinion on the safety of GMOs.

“We have always believed that consumers have the right to know what’s in their food,” wrote Denise Morrison, president and chief executive of Campbell Soup, on the company’s blog. “GMO has evolved to be a top consumer food issue reaching a critical mass of 92 percent of consumers in favor of putting it on the label.”

Campbell has met with a variety of stakeholders seeking to resolve GMO labeling issue since 2011. “Despite these efforts,” wrote Ms. Morrison. “Congress has not been able to resolve this issue. We now believe that proposing a mandatory national solution is necessary. Printing a clear and simple statement on the label is the best solution for consumers and for Campbell.”

While Campbell plans to continue as a GMA member, it said the company would withdraw its support for that and other groups’ efforts to oppose mandatory GMO labeling on the federal level.

Do you think Campbell Soup is making the right move in breaking from GMA and calling for a single national labeling standard that requires the listing of GMOs? What will Campbell’s break mean for the issue going forward? Should fellow GMA members follow Campbell’s lead?

Please practice The RetailWire Golden Rule when submitting your comments.
Braintrust
"Campbell’s made a strong move by getting in front of an issue that is clearly not going away. A national labeling standard will eventually be reality so they have generated good press for themselves by being open with the consumer."

"I would classify Campbell’s statements as "labelwashing" in a similar vein to greenwashing. If it were true that "We have always believed that consumers have the right to know what’s in their food," the company could have already placed a "contains GMOs" statement on their products."

Campbell’s made a strong move by getting in front of an issue that is clearly not going away. A national labeling standard will eventually be reality so they have generated good press for themselves by being open with the consumer. A continued effort to educate the consumer about GMOs and a dedication to trust and openness will be essential moving forward.

It seems to be more a PR stunt than anything else. In fact, I would classify Campbell’s statements as “labelwashing” in a similar vein to greenwashing. If it were true that “We have always believed that consumers have the right to know what’s in their food,” the company could have already placed a “contains GMOs” statement on their products. There is no restriction against doing so, making the CEO’s statements laughable.

The devil is in the details here. The current Secretary Vilsack’s proposed GMO labeling scheme is a smoke-and-mirrors attempt to hide the fact that GMOs are present in foods and look like something was done for consumers. What Campbell has done is position themselves to support such a backhanded measure and come out smelling like a rose, even though the scheme is not the labeling disclosure consumers want.

A multi-level issue. Yes, they should break away from the GMA if they don’t agree and yes, a single national standard makes sense if it is going to be inevitable that states would require it. Good that they are being transparent, although I suspect far fewer people care about GMOs in their food than the 92 percent who say labeling is good. If I were other members of the GMA, I’d be pretty angry at Campbell Soup. The point of such an organization is “in unity there is strength.” Campbell probably loses a lot of its influence over any future initiatives.

Consumers want GMO labeling, and if the food industry does not get behind the push for a national standard the states will do it on their own, creating a nightmare for manufacturers. Campbell is brave for taking this step. Hopefully other food manufacturers will follow, and then will help educate consumers about the pluses and minuses of using GMO ingredients so we can move past the current hysteria.

Denise Morrison is a bold, brave and smart CEO. She’s defaulting to the consumer/shopper, by understanding that virtually all of her target market is concerned by the issue. When your target consumer is concerned, the right thing to do is act to alleviate the concerns.

And yet the labeling in still somewhat unclear by using the word “partially.” I hope that behind the “more info” button is real data, I’ve not yet checked that out.

I think we will see consumers continue to be concerned and to make choices and vote with their shopping dollars, selecting more and more foods with less or no use of GMOs. And my sense is that it will be more prevalent in young families raising kids, which makes it an industry hot-button.

Leaders will emerge along the journey and I hope big food CPGs will not be afraid to join Campbell and address this issue in a way that educates and is also less harmful for the generations to come.

GMO is another scare issue with consumers. The fact is fruits and vegetables have been modified for years just not the new way. No self-respecting consumer products firm will harm consumers on purpose. Campbell Soup in on the right track. Just provide a label and move forward. Don’t wait for the government as you may not like their solution. It is best to tell the government we have taken care of the issue.

Well, of course “big food” should follow Campbell on this, but few will. Check out a recent cover story in Fortune magazine that spelled out what is so obviously happening with shoppers vs. “big food.” I’m also disappointed that some of the major trade associations, like GMA, FMI and others are pushing for more money/profits for big food when they should also consider, at least once in awhile, the consumer. But they follow their predictable patterns.

The majority of shoppers clearly want GMOs to be labeled. Some proposed legislation I saw, however, would even ban vendors from saying whether there are GMOs are in their foods or not. Gimme a break. It is in fact “big food” that continues with this stupidity, along with major trade associations (supported heavily by the membership dues of big food) and all this is giving smaller start-ups a chance to grab more share. And I’m happy about that.

“No self-respecting consumer products firm will harm consumers on purpose.”

Customers are going to insist on this, and Millennial customers especially. Kudos to Ms. Morrison for taking the lead on this.

I’m a fan of anytime someone cuts through the BS and this is exactly what Campbell is doing. The labeling does provide information for people who have a concern about GMOs and for those who don’t it’s probably the equivalent of a smoker looking at the Surgeon General’s warning on a pack of cigarettes — it has no impact on them at all.

Having a national labeling standard makes complete sense since it largely affects national brands and it would be ridiculous to have multiple versions of the label or to try to come up with one version that satisfied the varied requirements of 50 different states.

This one is complex. Right thing to do for consumers? No question about it. For the biosphere? Depends on which research/predictions you prefer. For the supply chain? National regulations are probably the lesser of two evils (e.g., CA Prop 65). For GMA? Maybe.

This has been a distraction from — and maybe partial cause of — working on solutions to a long-running decline in sales for center-store CPG sales. Association strength is in channeling the membership energy for a common good. If this move is disruptive for GMA in the short run, hopefully it will bring resolution to the distraction.

Campbell’s Soup is making the right move to lead the way with this labeling. It sees the writing on the wall, um the writing on the can, to label GMOs for the ever-more health aware, demanding consumer, let alone having the government get into it.

I for one am happy to see that something is a GMO product (so I can avoid it), than to have to wonder or search. Or, as BrainTruster Karen McNeely said, like the writing on the cigarette package — and it’s up to the buyer to beware.

The more the consumers know about the food products they consume, the better. Sharing this information openly may allay some concerns about inclusion of GMO foods.

Getting wellness claims right appears to be a short-term play as competitors can quickly follow suit. The real winners will be those who truly innovate around taste and convenience.

Braintrust
"Campbell’s made a strong move by getting in front of an issue that is clearly not going away. A national labeling standard will eventually be reality so they have generated good press for themselves by being open with the consumer."

"I would classify Campbell’s statements as "labelwashing" in a similar vein to greenwashing. If it were true that "We have always believed that consumers have the right to know what’s in their food," the company could have already placed a "contains GMOs" statement on their products."