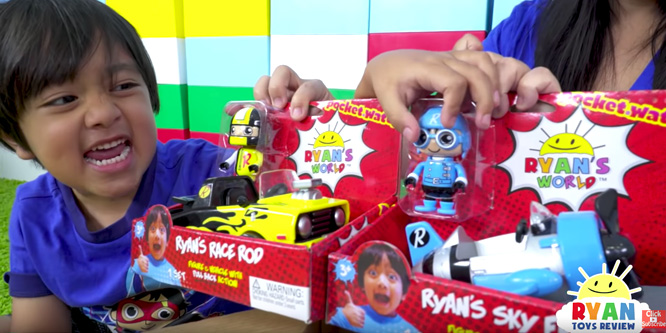 A big part of influencer marketing is about tapping into younger audiences through figures they connect with. So, Walmart has partnered with a six-year-old YouTube star to court the post-toddler toy-buying set.

The six-year-old YouTuber stars on a channel called Ryan ToysReview, Reuters reported. The channel has received billions of views. Starting August 8, Walmart will begin selling a line of toys under the banner, Ryan’s World. The toys will include slime, stuffed animals and other items and will be sold both online and in stores exclusively by Walmart. The deal was negotiated through the child’s toy company, pocket.watch, which intends to bring additional YouTube influencer-related products to market in the future.

A video on his YouTube page shows Ryan and his mother announcing the unboxing of the Ryan’s World toys “he helped create.” Ryan then unboxes and plays with the toys while enthusiastically explaining their features.

While taking product advice from media sensations who have only recently gotten the training wheels off of their bikes may seem quaint, kids with social followings are big business. A Forbes list of the top 10 youngest influencers of 2017 calculates those stars’ aggregate total reach at more than 77 million people. Ryan’s World is listed as the most lucrative, having made $11 million the previous year.

Walmart has made other recent dips into influencer marketing, as an article on Digiday explores. On some product pages, Walmart has been adding images and videos showing influencers using the items being sold. Since Walmart doesn’t link to the individual influencers’ webpages or identify them by name, however, these product pages don’t seem to take advantage of the synergy that influencer marketing is supposed to create between brand and audience.

Other big retailers that have also been pursuing ways to leverage the social reach of fans of their products. Macy’s, for instance, launched its Style Crew program last year, which invites and incentivizes employees to share short, Macy’s-produced video clips of themselves using and endorsing specific products. The program began with 20 brand ambassadors and now has 300 members.

DISCUSSION QUESTIONS: Is it a good idea for Walmart to partner with influencers as young as six? What might the advantages and pitfalls be of such a brand partnership?

Please practice The RetailWire Golden Rule when submitting your comments.
Braintrust
"Without question the concept and power of influencers and micro-influencers for that matter extends down to even a six-year-old."

"This influencer’s age is actually the safest bet for any brand influencing. He more than likely isn’t going to bring any bad press to your brand."

"The ethics of Walmart getting on board with this are all a little murky to me."

Without question the concept and power of influencers and micro-influencers for that matter extends down to even a six-year-old. As a father to both a five- and seven-year-old, it’s clear that this upcoming generation is extremely digitally savvy and, like any other demographic, very influenced by their peers. So yes, it’s a very smart and strategic move by Walmart as they extend their brand reach to a younger demographic.

So for Walmart, this move is a very high reward and low-risk proposition.

Just because you can doesn’t mean you should, and this applies to Walmart using children to do their marketing for them. Where there is a natural draw to celebrity, and becoming one, this need not be taken advantage of by brands and retailers. Let ’em be kids, Walmart.

I have to admit, the growth of these child influencers gives me the creeps. Sure, the stars themselves may find making the videos fun but they aren’t old enough to understand the implications of celebrity. The ethics of Walmart getting on board with this are all a little murky to me.

Compound that with the clear sense that some adult has built an empire around the child… The kid didn’t do that – an adult did. Reminds me in a way of the 6 year old beauty queen world… And then I want to go watch Little Miss Sunshine again just to regain a bit of sanity.

Is this child an “influencer” or a YouTube star Walmart is leveraging like they would, say, a young Disney star? And to what degree is Walmart leveraging the entire infrastructure built up around this kid?

Everything about this is like a young Disney star — including the machinery. So I just can’t see calling this “influencer marketing” in the way that term is used online. (It IS “influencer marketing from the good old days of hiring known stars to support your products.”)

And then the big question: Is it a good idea? I see it as a smart tactical move — it should drive some profit and action in the near term and that’s good. But it is highly unlikely to turn out to be a long-term product line or a long-term relationship.

Photogenic six-year-olds quite quickly turn into middle-schoolers and that won’t be good for Walmart.

An influencer at any age is a good partner. If it makes sense and the influencer is someone the brand wants to align with, why not? It has to work for both sides. Influencer marketing is very popular now — because it can work.

Age doesn’t matter! This influencer is bringing 15 million new followers and more potential shoppers for Walmart. This influencer’s age is actually the safest bet for any brand influencing. He more than likely isn’t going to bring any bad press to your brand. Brands are scouring YouTube searching for their next ambassadors. Good for you Walmart, you backed a great one!

Of course — all child welfare boxes being checked off. Kids are an important segment of Walmart’s business and kids are, after all, “born digital” these days which means they may be on YouTube before they are in kindergarten. Of course, in Ryan’s case there is a Peter Pan problem — influencers can’t stay kids forever, so somehow the transition needs to be managed in ways that don’t start creating horror stories of child influencers who develop serious problems once the spotlight fades.

Celebrity spokespersons representing a brand brings its own set of dangers regardless of their age. Just ask Subway. Having a child be a brand spokesperson has even more risks for both the brand and the child.

For the brand, as other have noted, children grow up. For the child, being in the spotlight creates expectation that adulthood often fails to deliver. Just look at the child stars that have had difficulties as adults.

Having a six-year-old doing ads for them appears to be working for Walmart at the moment, but who will take responsibility for the decision and the child when it doesn’t?

Great summary, Steve! While effective in the near-term, there is generally a short life-cycle for influencers (except for pros like The Kardashian’s).

Braintrust
"Without question the concept and power of influencers and micro-influencers for that matter extends down to even a six-year-old."

"This influencer’s age is actually the safest bet for any brand influencing. He more than likely isn’t going to bring any bad press to your brand."

"The ethics of Walmart getting on board with this are all a little murky to me."