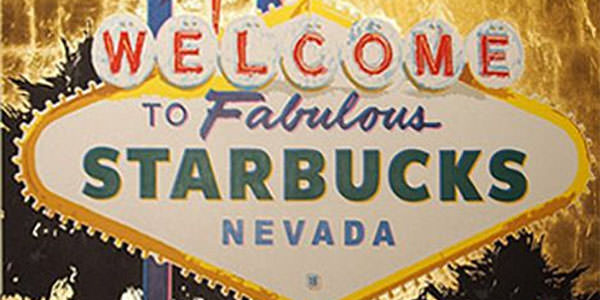 There is perhaps no place in the U.S. as synonymous with ostentatious presentation and over-the-top stunts as Las Vegas—a fact that Starbucks intends to use to its advantage with its entirely unique one-off store on the Vegas Strip.

According to the Las Vegas Review-Journal, the store, which is currently under construction, will differ dramatically from the well-known look and feel of any of Starbucks’s 21,000 existing locations. The newspaper describes the location as having three-tiered stadium-style walnut-bench seating that will hold 36 customers. It will be decorated with a one-of-a-kind mural and feature a 150-square-foot miniature movie screen for customers the view. There will also be a patio, which will be accessible by a 24-foot wide glass door with eight folding panels.

"It’s about the experience. The Strip is known for its oddity of experience," Dave Teator, senior project manager with the store’s general contractor, told the Review-Journal. "You’re not going to go to another Starbucks anywhere and see this. It’s unique to the retail brand."

But one wonders if what happens in the Las Vegas Strip Starbucks will stay in Vegas, or if we will someday see stadium seating and movie theaters making their ways to other Starbucks locations.

While the offbeat Vegas store is entirely unique, Starbucks has experimented with formats that diverge from its main brand identity in the past. For instance, "Stealth Starbucks" locations, which are owned and operated by Starbucks, but are unmarked as such, appear as neighborhood coffee places with no Starbucks branding. They have allowed Starbucks to implement features in those stores the company doesn’t necessarily want associated with its iconic logo, which may affect the public’s perception of the chain.

The Las Vegas Strip location is also not the first time Starbucks has tried to absorb some of the local Vegas ambiance into their store design. The Starbucks website indicates that in 2011 store designer Justine McHart "was tapped to build the Starbucks brand presence on the [Las Vegas] Strip with distinctive new licensed store designs" for the more than 30 regular Starbucks stores in the area.

"On the Las Vegas Strip, a customer can literally see all 35 stores in one visit, so it’s really important to differentiate each one," Ms. McHart said on the website. "We want people to feel the difference and generate buzz about our stores."

Will the Las Vegas Strip Starbucks experience offer valuable insights to the company or lead to confusion and brand dilution? Would other retailers benefit from one-off locations in big tourist destinations like Las Vegas?

Please practice The RetailWire Golden Rule when submitting your comments.
Braintrust
"It’s hard to know whether "what happens in Vegas, stays in Vegas." You can’t blame Starbucks for wanting to have a little fun with its typical design elements in the middle of a sea of over-the-top retail experiences."

"As a Vegas freak myself, my wife and I will visit it just to check it out. Starbucks does extraordinarily well out there, and it should do very well. Lots of disposable income flowing freely, so what could go wrong?"

11 Comments on "Starbucks rolls the dice on unconventional Vegas location"

It’s hard to know whether “what happens in Vegas, stays in Vegas.” You can’t blame Starbucks for wanting to have a little fun with its typical design elements in the middle of a sea of over-the-top retail experiences. And there may be some elements (the tiered seating, for example) that would translate to other locations, whether they are high-traffic tourist destinations or not. But I wouldn’t expect Starbucks to deviate nationwide from such a key part of its branding message.

Bravo Starbucks! The company is never content to rest on its laurels and is always looking to improve its store designs and customer experience. The Strip store is just another in a long line of Starbucks innovations. The company will learn from this store and use that knowledge throughout the chain.

I don’t think it will do either — no valuable insights and not lead to any confusion. Starbucks will probably see the same results other brands experience on the Strip — it will be their highest volume location, will have long lines and will need security. I base this on the plain vanilla Starbucks stores already located inside the casinos where there is always a line. White Castle opened on the strip and I’m amazed at the lines. Outback Steakhouse is suppose to have their number one in sales units there. Walgreens has like 12 checkouts going. So yes, if you can get on the Strip you will do great. It’s just going to cost a lot.

As a Vegas freak myself, my wife and I will visit it just to check it out. Starbucks does extraordinarily well out there, and it should do very well. Lots of disposable income flowing freely, so what could go wrong?

If they are able to stay true to the brand and not get so far out that it’s no longer recognizable, why not? If there’s ever a place to create a really out-there innovation location, it’s Vegas. I hope they keep it fresh and keep trying new things in it though … maybe even bring some experiential and live events into it.

There are people from all over the world and of course every U.S. state in Las Vegas. Starbucks is brilliantly testing out new concepts and probably quantifying which segment of their customers find any of the new approaches appealing.

With that information Starbucks can decide where, if anywhere, a new concept can be located successfully. In other words Las Vegas may just be the perfect place to conduct a market test before causing any harm to the company or brand.

Gee, I never realized that people go to Vegas for coffee. I doubt this one-off Starbucks will either dilute, confuse or provide insights. I like that sign, though!

The idea of multiplicity in terms of retail experience under one flag is not only cool and exciting, it is THE future for stores. In terms of retail, you can get anything you want online, except a great store experience. So that’s the goal—exceptional experience. From store design to associate service, off the charts.

So, what Starbucks is doing in Vegas and with their roasteries is fantastic to look at and go into on one hand, and on the other, just good business sense.

Starbucks devotees will likely seek out this unique location, and tweet and whatever about it to let everyone know they are cool and have had this unique Starbucks experience. Will what plays in Vegas, play in Peoria? Maybe. Time will tell.

We often hear and read about how Starbucks is implementing something new and interesting. These new and innovative additions to the needs of the market are always as a result of the company’s paying close attention to the market with enhanced listening and observation tools and skills.

As we know from discussions and articles like this one, the company will plan and test their response through existing unidentifiable parallel coffee shops that are company owned and staffed. With all of the mistakes and slowing sales, what’s the problem here? Is Starbucks asking the wrong questions, or listening to the wrong people or maybe just inept at strategic planning and implementation?

Perhaps the search for information should be replaced by the search for consumer interest and participation as in what they are paying for even if it is a drive through, donuts or breakfast sandwiches. If they can recreate a cup of coffee why not try some additional consumable recreation with healthier meats, eggs and sweeteners?

I think Vegas is its own bubble and what happens in Vegas stays in Vegas. The fact is, to be a business on the strip requires an “attraction” approach, so Starbucks are better off experimenting to stand out as a one-off experience so people have something to talk about. Will they learn anything from that location? I doubt it except maybe for extreme line management and high throughput given how packed that store will be.

Braintrust
"It’s hard to know whether "what happens in Vegas, stays in Vegas." You can’t blame Starbucks for wanting to have a little fun with its typical design elements in the middle of a sea of over-the-top retail experiences."

"As a Vegas freak myself, my wife and I will visit it just to check it out. Starbucks does extraordinarily well out there, and it should do very well. Lots of disposable income flowing freely, so what could go wrong?"