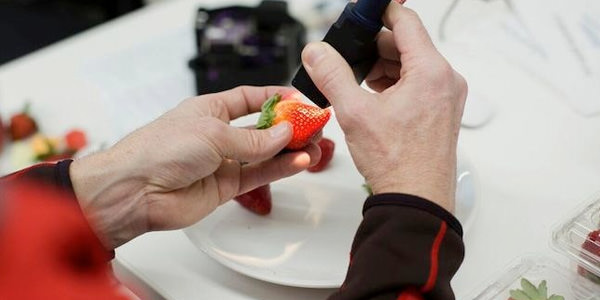 Opened in January near MIT’s campus in Cambridge, MA, “the bustling lab full of bioengineers, students, nutritionists and farmers [are] hard at work testing big ideas about the future of food,” Target said on its Bullseye View blog. The multi-year collaboration, first unveiled last November, is concentrating efforts on urban farming, food transparency and authenticity, supply chain and health.

The first of the two ideas developed by the team focused on food labeling. The line, Good & Gather, displays ingredients on the front of packaging rather than in fine print on the back.

The second, aimed at providing real time nutritional information, allows people to scan fruits and vegetables, learn the exact nutritional value and then pay based on freshness.

Greg Shewmaker, one of Target’s “entrepreneurs-in-residence” who formerly drove food innovation for Tesco, said in a statement, “We’re building disruptive technologies and — most important — we’re closer than ever to helping people know more about what’s in their food.”

Other projects that the Food + Future coLab is working on:

Said Target’s chief strategy and innovation officer Casey Carl. “We’re working at a pace we could only achieve by putting all the right people in one room — from retail experts to bioengineers — and then giving them the freedom, autonomy and resources to make things happen.”

Please practice The RetailWire Golden Rule when submitting your comments.
Braintrust
"I have gotten enamored with "green roofs" which are energy efficient and environmentally helpful. Putting local organic gardens on Target store roofs could be great for the local communities."

Transparency in food is smart, but I have to question whether once again Target is taking its eyes off the basics: What products it carries in stores, whether these are the products consumers want and how to keep them in stock.

Totally smart of Target and well suited for the emerging generation.

I have gotten enamored with “green roofs” which are energy efficient and environmentally helpful. Putting local organic gardens on Target store roofs could be great for the local communities.

It will be interesting to see how Target’s support for this initiative is maintained over the coming years. On a personal level, I welcome the initiative in order better understand what we’re actually putting into our bodies. I suspect the research will uncover nasty truths that will be in direct conflict with Target’s commercial interests. It will be interesting to learn 1.) what those nasty truths actually are and 2.) if we are told, what will Target do to address these challenges and will they support the necessary changes?

Placing the ingredients on the front of packaging will at least force people to pay attention to the issue. The true test of Target’s intentions will be unveiled if they choose to use this technique on their private label brands. Or will they bury this idea with some corporate spin?

This is an interesting position for a retailer to take, since customers are coming to shop for food rather than spend their time examining food (isn’t this the responsibility of the retailer?). What about doing a food grading system that standardizes the quality level of the food so that a consumer knows how fresh or nutritious a product is?

While I like the idea of putting ingredients on labels, far too many folks don’t have any idea what the labels are really telling them. With that in mind, Target would be smart to lean towards scanning foods for their nutritional value. That is something more can relate to. Just sayin’.

This is interesting stuff! I am especially intrigued by the spectrometer to gauge food nutrient levels, contaminants, ripeness, etc.

It seems to me that the spectrometer technology could be something that every consumer could have in an app. Shoppers would be able to judge the relative “worth” of a food using the app. Why would I need to go to Target? I suppose the answer is that Target will get some first-mover advantage, or the head-start of re-training its shoppers and brand halo association.

Gotta hand it to TGT, it is trying to re-engineer grocery retail.

#1 Food labeling. Great idea. Hope it puts pressure on the FDA to bring the industry into the 21st century.

#2 Produce scanner. Awesome idea. I was stunned by the news that most fruit is over 12 months off the “vine.” And most of it is depleted of nutritional value. Who knew? Is it true?

I think these efforts put TGT into a leadership role. And they fulfill the “wellness” positioning in surprising relevant and unique ways.

While all of this exceeds my expectations and it is terrific output from partnering with two world class brands: MIT and Ideo, I hope they are placing as much emphasis on the basics of grocery retail. Being instock and training sales floor associates.

Innovation is generally a good thing, especially given the rising desire for transparency, social responsibility and the environment. Just will be interesting to see if Target has ability to continue and the agility to course correct.

Design isn’t what you think it is. When you experienced the Magsafe magnetic power connector on the Apple for the first time, you probably didn’t think “wow, what a great application for Neodymium!” You probably just felt wow, and from then on, you couldn’t see plugging into your computer in any other way. So … I guess for people who just tripped on the cord of their health habits it will probably lead to a wow. For the rest? Have another chip.

Some of these food innovations are good business and some just feel-good PR. Package labeling improvements, all good. Nice to know the age of produce, and I’m all for educating the consumer, but is eating aging produce a major, or even minor, factor in unhealthy eating? Doubtful.

I believe in transparency for consumers — it’s their right to know what’s inside their food. In the free market society we live in, clarity about ingredients and nutrition will play out where consumers ultimately spend their money when food producers are clear about all of their ingredients.

What concerns me about this specific technology is that it’s expensive and requires another expensive device for consumers.

Food producers own the responsibility to be transparent about the ingredients and manufacturing processes. The label is limiting in size and legislative restrictions make it difficult to convey everything about what’s inside. There are other options available using “disruptive” technologies without requiring new devices for the consumer.

Braintrust
"I have gotten enamored with "green roofs" which are energy efficient and environmentally helpful. Putting local organic gardens on Target store roofs could be great for the local communities."