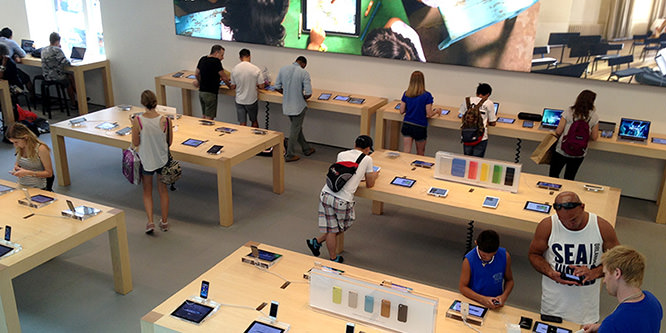 Yesterday marked 15 years since Apple opened its first two retail stores in Glendale, CA and Tysons Corner, VA. At the time, as an article on the MacRumors site reminds, success for the new stores was considered far from assured. But a team that included a former vice president of merchandising at Target (Ron Johnson) worked with Apple CEO Steve Jobs to create a new kind of store that change retailing in the process.

A 2001 video includes Mr. Jobs providing a tour and making a big deal about the 36 computers in the store, all with access to the internet. The hands-on nature of the Apple Store shopping experience may seem mundane in 2016, but it was a big deal back when the chain was just getting off the ground.

“You can go up to any computer and start surfing, go to your personal website or do whatever you want to do on the internet. All of our portables are connected with Airport wireless networking so you can experience that for yourself. It’s pretty great,” Mr. Jobs said.

Tomorrow, Apple will open its newest flagship store on Union Square in San Francisco. The next generation Apple Store comes with 40-foot glass doors and is divided into five sections:

DISCUSSION QUESTIONS: How do you think the Apple Store has changed retailing over the past 15 years? What will the chain need to do to improve on its record of success over the next 15?

Please practice The RetailWire Golden Rule when submitting your comments.
Braintrust
"The new flagship design seems to be more about the aesthetic and less about serving, IMHO. Not sure it will have the same impact."

"Apple has clearly had an impact on certain retailers, however much of what Apple originally initiated is still ignored today."

6 Comments on "The Apple Store changed retailing 15 years ago"

Being someone with a customer experience bent, the original Apple Store was “Service Design” 101. That is a design practice that is taught throughout Europe but only a few design schools around here embrace it at the same level. Perhaps more now since CX is taking notice.

Service Design is an approach to design that incorporates the services being performed. I have always wondered if Ron was following Service Design practices or simply came up with it on his own.

Bottom line is yes, it opened the door to retail that is all about serving the customer. Serve before you sell — my mantra. The thing is, the new flagship design seems to be more about the aesthetic and less about serving, IMHO. Not sure it will have the same impact.

Apple has clearly had an impact on certain retailers, however much of what Apple originally initiated is still ignored today. Most major retailers do not have a “try before you buy” live area that includes internet connected devices. We also do not have service as the focal point of the retail experience which is clearly the goal of an Apple Store. Instead we see retailers focused on price and ignoring the customer service until second, third or worse, as their lower-rated store initiative.

I think one major area where Apple’s innovation changed retailing was in the fit and finish of the mostly wood displays and all the other surfaces in the store. Compare what all the fixtures and finishes looked like back then to the in-store experience at Best Buy and Circuit City. Which was more inviting? And Apple has continued to set the gold standard in how the eyes are surprised and delighted once you enter their stores.

Certainly no one would deny Apple Stores were successful, measured by conventional metrics like sales/square foot and the amount of (often fawning) publicity they attracted. But similarly, can anyone deny that their success is fundamentally tied to the success of the products they represent?

For a company whose customer base can be likened to a cult, they are magnificent temples — perhaps literally — but they’re a dangerous model to people to think a trendy salesroom can overcome a fundamentally weak product.

Since its first store opening in 2001, and even today, Apple’s retail model has been the darling of Wall Street and an aspiration for other retailers to emulate. When I walk into a mall today, the only store that has excitement and energy is the Apple store. I am surprised that other retailers haven’t been able to apply some of Apple’s successful principles to truly engage their customers. It’s a combination of brand enthusiasm, great product and flawless execution.

While Apple has a fantastic reputation and track record of success with its retail stores, they can’t rest on their laurels. They need to continue to evolve their stores and processes to adapt to changing customer preferences. However, what will probably have the biggest impact on the success of their stores is the continued introduction of innovative new products. I think they are due to invent another new product category like they did with digital music, tablets, smartphones, and wearables. What will be the next new big thing?

Apple has no doubt been the leader in retail innovation for the greater part of the decade. With that said, unless the business continues to innovate they will fall behind and join the rest of the retail pack in a pattern of predictable business. One thing that stands out about Apple is the customer service. There are always available representatives when you walk into Apple, and while I think nothing can take the place of human interaction, time is becoming more valuable than ever. I foresee Apple innovating in the ways a customer can purchase items from an Apple store. Self-scanners and artificial intelligence customer service agents will enable a faster, more seamless checkout. This empowers customers who come in knowing exactly what they want to get in and get out without spending excess time waiting for a customer service agent. I also envision a more accessible genius bar option. Everyone knows that if you want to schedule a Genius Bar appointment you’d better plan in advance. I foresee Apple having training stations that enable… Read more »
1
|
0
-   Share

Braintrust
"The new flagship design seems to be more about the aesthetic and less about serving, IMHO. Not sure it will have the same impact."

"Apple has clearly had an impact on certain retailers, however much of what Apple originally initiated is still ignored today."