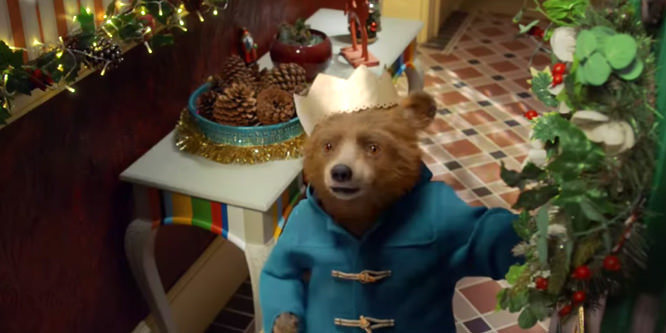 Some of the best consumer advertising in the world is broadcast during the holiday season. Many Americans, unfortunately, do not get to enjoy much of the marketing creativity around Christmas as the spots promote retail businesses in the U.K., Australia, Europe and elsewhere. RetailWire, in our own small way, will attempt to remedy that with the third annual global edition of our Christmas Commercial Challenge.

Week one is a rematch, of sorts, between Marks & Spencer (M&S) and Sainsbury’s. In our 2016, competition between the two British retailers, M&S’s “Mrs. Claus” spot took the week and eventually went on to be named the best international commercial of the season by RetailWire’s readers.

This year’s spot from M&S — “Paddington & The Christmas Visitor” — involves plenty of action as the famous bear goes on an unexpected ride. The chain has produced a book with the same title. Proceeds from sales will go to NSPCC, the leading children’s charity in the UK.

Sainsbury’s takes its “Every Bit of Christmas” commercial in a completely different direction with real people — aside from a brief cameo by Kermit the Frog — singing along to a song about all of the things to celebrate about the holiday. The retailer has a separate video posted on YouTube where viewers can sing along karaoke-style to the song on their own.

DISCUSSION QUESTIONS:  What is your critique of Marks & Spencer’s “Paddington & The Christmas Visitor” and Sainsbury’s “Every Bit of Christmas”? Which do you think is the more effective of the two? Would these spots work for a U.S. retailer if presented to a U.S. audience?

Please practice The RetailWire Golden Rule when submitting your comments.
Braintrust
"Another commercial that tugs at the heartstrings paired with a commercial that has a catchy tune! "

"I like the overall strategic direction taken in terms of “all people enjoy, have a good time!” — and a little less on specific product."

"I can see the “common man” liking this ad and beginning to sing it and live it. "

To me, the Mark & Spencer ad was the winner of the two. Not only remarkably creative but witty and fun to watch. It held my interest to the very end. It has warm moments, and you knew it was the Christmas season throughout the ad. The Sainsbury’s ad was good but not as creative as the M & S ad, and I found myself losing interest at times. However, keep in mind that we typically look at 30-second ads, so if these were real TV commercials they would be cut down significantly, and it’s hard to say how they would work at a shorter length. If these ads ran in the U.S., I think the public would react well to both of them, but again my vote goes to M & S as the better of the two.

Another commercial that tugs at the heartstrings paired with a commercial that has a catchy tune! Both of these are great spots, but Paddington is the winner for me. The bear’s good-natured adventure perfectly captures the holiday spirit.

I enjoyed both, but found the Sainsbury’s ad a little bit frantic with the quick scene changes. My vote is for M&S. It had a cohesive message that was easy to follow and enjoyable to watch. As Art noted, both would have to be dramatically shortened for the U.S. market. I believe the M&S ad would work better in a 30-second format.

M&S’s advertisement is excellent. It is humorous and engaging and the use of a much-loved figure like Paddington will resonate with both adults and kids. Admittedly there are no products promoted, but given M&S’s status with the British public, they can get away with this.

In my opinion, Sainsbury’s advert is dreadful, not least because it’s annoying and cheesy! However, most importantly, it is unlikely to resonate with Sainsbury’s core audience and it doesn’t really fit with the company’s brand values. To me, it suggests that Sainsbury’s has lost its way this Christmas!

Great ads both going after different strategies but I would have to select M&S as the winner as it is clear and entertaining. Although the Sainsbury’s ad brought in the consumer it was a little cluttered and difficult to understand at times.

If we’re talking about which of the two evokes the traditional Christmas spirit it has to be M&S’s Paddington Bear ad. I also think it has the warm, cuddly, feel-good factor that makes for a great seasonal ad.

Christmas ads are all about selling the brand — or getting the ad discussed so that people bother to watch it in the first place. The M&S ad wins here too — using a much-loved British character like Paddington was a good move.

The Sainsbury’s ad fails for me. It might have got people talking initially but only about how much they hated it!

I loved both ads and especially that both brands are carrying the story forward through a book and the karaoke. As for commercials for the brands, neither of them really reminded of who the brand was. Maybe the Sainsbury’s ad a bit more that M&S. I get hung up that way because I believe an ad should reflect the brand and make me want to go shop there. If I weigh my agenda with the two ads, I would pick Sainsbury’s.

Boy, both are great. I like the overall strategic direction taken in terms of “all people enjoy, have a good time!” — and a little less on specific product. We could use some of that here in the U.S., attitude-wise. It’s been a very divisive year, so let’s take a break from the battle and just enjoy the season, no matter who you are. It would work for any retailer, but you could see both Target and Walmart taking that route on a large scale.

Having said all that, if I had to vote for one, it’d be Sainsbury’s. I just love the shots of all the different kinds of people digging in for a good time. Inspiring and fun.

Definitely spreading some holiday cheer with these two choices. Both are heartwarming and family oriented, but I feel that Marks & Spencer’s “Paddington & the Christmas Visitor” lacks the authenticity and personal connection that Sainsbury’s “Every Bit of Christmas” offers. So my vote goes to ‘Every Bit of Christmas.” Super curation of real life examples in this spot!

The M&S ad is colorful and imaginative and evokes a sweet holiday spirit. Anyone notice the double entendre at the end: “This Christmas, Let’s Spend It Well!”

The Sainsbury’s ad seemed primitive, but then it got catchier. I can see the “common man” liking this ad and beginning to sing it and live it. Anyway, my vote goes to M&S, with special credit to Sainsbury’s for its authenticity.

And P.S., the closing line for Sainsbury’s is “Live Well For Less.”

First, I am glad you did not choose for this poll the John Lewis advert, which, whilst being the outright winner in so many previous years, seems to have got stuck in a predictable sentimentality and loses impact as a result. Many of the others (e.g., Tesco) seem to have got hung up this year on a rather self-conscious portrayal of multicultural Christmas which has not resonated with the British people.

So I think that George Anderson chose the right two to pit against each other. Personally, I vote for Sainsbury’s (while respecting esteemed retail expert Neil) because it captures something that we like, which is fun and enjoying ourselves, and takes a risk in changing the image of Sainsbury’s from a middle-class to a more popular audience, capturing ground from Asda shoppers, broadening its appeal to the British shopper

The goal of every advertisement spot is to establish an emotional connection between the viewer and the brand. M&S does exactly that with a brilliant use of Paddington in an amusing yet still emotional adventure with “Mr Claus”. A wonderful ad that I’m sure will resonate positively with their audience for the holiday season.

Sainsbury’s tried to take a much more fun approach for the holidays by highlighting all those fun and often wacky things families do when they come together for the holidays. While it does give them an opportunity to showcase products you can buy, it seems a bit forced to me. I feel the most successful holiday advertisements are the ones that don’t focus on products but just put the brand in a positive light.

The winner for me is M&S.

My winner is M&S. It had an engaging story line that made me watch it all the way through, finishing with the nice touch of “spend it well”. The ad then also had a bonus in association with the current link to Paddington Bear which is of course running its own ads so in people’s minds there is a second reminder of M&S subliminally.

Sainsbury’s ad is OK but I could have dropped out of it at any point.

Ultimately, both of these link back to strong the shared national cultural experience of Christmas. In the Sainsbury’s ad, they had a celeb singing about classics from a UK Classic Christmas show on the telly and the reference to Brussel sprouts, which are always on the dinner plate, like ‘em or not. (Some say they are the devils work!)

The style could work in the US, but the connection points need to be built in to link with the US Christmas culture as these have tried to do for the UK.

Americans may be missing out — or not — but we seem to have the same theme: “heartwarming” vids vs. sing-alongs My reaction is much the same (as to the Macy*s vs. Nordstrom): sorry, but I didn’t find either one “effective”. The bear I found, for want of a better term, too “British” — by which of course it may be ideal in its target market, and the Sainsbury ad … well, I just didn’t like the concept, though it should get credit for at least mentioning products.

The first is the winner for me. The story is strong and memorable. It even seems much more shareable. Marks & Spencer’s evokes the magic, wonder, and generosity often associated with Christmas. On the other side, Sainsbury’s shows how different people celebrate Christmas, making sure just about everyone is represented in the cheesy clips.

"I like the overall strategic direction taken in terms of “all people enjoy, have a good time!” — and a little less on specific product."

"I can see the “common man” liking this ad and beginning to sing it and live it. "