These social media behaviors are turning off your followers 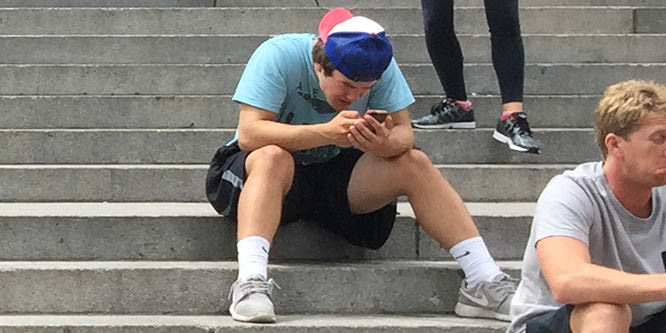 Through a special arrangement, presented here for discussion is a summary of a current article from MarketingCharts, a Watershed Publishing publication providing up-to-to-minute data and research to marketers.

A recent study from Sprout Social shows that brands need to strike a very delicate balance with their social media promotions or risk losing their followers. For instance, posting too many promotions is the most annoying action. But at the same time, consumers say they need to see a product multiple times on social media before they’ll buy it.

Far and away the most annoying action a brand can take is posting too many promotions, cited by 58 percent of respondents to Sprout Social’s survey, which was fielded among more than 1,000 Facebook, Instagram and Twitter users. About one-third or more said it’s annoying when brands use slang and jargon (38 percent), lack personality on their accounts (35 percent) and try to be funny when they’re not (32 percent). Let’s deconstruct that for a second: some of your followers want you to have more personality, but you can’t try too hard and you can’t use certain terms. Good luck with that.

Moving on to the actions that really hurt — unfollows — the survey indicates that overdoing it on promotional messages (46 percent) is the biggest culprit. Tweeting too much (35 percent) is also a complaint, though irrelevant information is a bigger turn-off (41 percent). Just so you’re clear, you also can’t be too quiet either. Almost one in five say this would make them unfollow your brand.

So be active but not overly promotional. And here’s the kicker: some repetition appears to be necessary. About 85 percent of survey respondents said they need to see a product or service multiple times on social media before they purchase it, with most of those (61 percent overall) wanting to see it two to four times.

Other findings from the survey:

DISCUSSION QUESTIONS: Do consumers have less patience with irrelevant social messaging than with TV and other outreach methods? What are your personal dos and don’ts for establishing a brand personality and productive messaging via social media?

"“Authenticity. If you can fake that, you’ve got it made.”"

"Authenticity and respect — if shoppers perceive the lack of either of these on your use of social media, your efforts will backfire."

Good insights from this research. Reminding brands to be cautious of the blinders that come with believing their own propaganda, while aligning with a range of sentiments. Continuously shilling erodes any relationship, and it is relationships that social media seeks to foster.

Kohl’s did one of the more blatant attempts of a brand trying to be funny when they’re not on social and online. When the Chewbacca mask video went viral, Kohl’s sold out of the item quickly online, leaving many prospective customers from the 130+ million video viewers frustrated on social media. How did Kohl’s respond? With a message along these lines: “Sorry, the item is unavailable online. Why don’t you use The Force to try to find one in your nearby stores?”

You have to admit Kohl’s gaffe was funny — only in a wildly different way than they intended it to be.

First off, the survey answers seem contradictory because consumers really can’t say what caused them to buy if the decision was centered around an emotional trigger. Emotions are in the subconscious, which has no voice box, so most people will make up an answer to that type of question. Secondly, most of us have a highly developed B.S. filter, so we reject any conversation or messaging that is not authentic in our specific view. Lastly, overdoing promotions is the kiss of death for brands and retailers. It tends to reduce the conversation to price, which matters much less to many people than marketers think it does.

In my personal social media I stick with fun and family. In my business social media, it’s all about shopper behavior and retail, based on a desire to add value for those that read it.

I think consumers’ tolerance for irrelevant ads is higher than ever, no surprise. I also think this is true in most every media channel, including TV. Who watches commercials anymore? Brands do indeed need to strike a balance between promotions and information/entertainment in order to be a credible social connection for their loyal fans. I think one of the best types of content to push on social is ways to incorporate the brand into the lifestyles of the target audience. And after the drumbeat of that kind of messaging becomes understood over time, the brand can then integrate promotions to drive shoppers toward their products and services to improve their lifestyles.

Social messaging needs to be consistent with the overall brand message and value. As long as the content and conversation are in sync with the brand and the products/services, then you maximize the value derived by your followers.

Do stay authentic and communicate in a consistent voice while listening to your followers. It’s a conversation and not a lecture.

Do not try to be something you’re not or to jump on a trending topic for the sake of that topic rather than because it is relevant to your brand and followers.

Social media personalities walk a fine line between being inaccessible and being ridiculous. Some Millennials are drawn to brands that share their personalities and values, but younger Millennials and Generation Z are skeptical of anything that looks like trying too hard. This puts some brands in embarrassing situations. Chipotle, for instance.

I ask myself the following two questions when writing content for web/social media:

Shoppers that use social media are savvy and can spot a veiled sales tactic a mile away. Brands that use social media as a sales and marketing channel dance on a razor’s edge. Social media was created for the broader shopper community to share and communicate. Corporate financial agendas are not welcome. The word authenticity was used in an earlier post. Authenticity and respect — if shoppers perceive the lack of either of these on your use of social media, your efforts will backfire. That same community will expose your disingenuous tactics.

Connecting through social media channels is about connecting — not promoting. Relevant and useful information is content marketing. Promotional information is pitching. The good thing (for the consumer) about social media is that at any time, the consumer can disconnect from the retailer. So focus on building a relationship with useful content and thoughtful engagement and the money will follow.

“Authenticity. If you can fake that, you’ve got it made.” Please forgive me for quoting Groucho Marx here again, but, he truly nailed the social media problem back in the days when telegram senders had their own version of the 140-character limit. We gray-hairs can offer all kinds of advice to social media marketers about the tone, content and frequency of messaging, but in the end, it comes down to writing ability and strategic coherence. If you paid as much to send a tweet as Groucho did to send a telegram, you might put more resources into the message content. So if you are tempted to flood your audience with cheap-to-send messages with the intent of driving up marginal response, be careful. This survey may have some validity issues, but the findings are still food for thought. The test of relevance is far more nuanced than “did the recipient ever view this product category?” And price offers ring more and more hollow as their frequency increases. Content creators must also stay cognizant of the range… Read more »
0
|
0
-   Share

Each social media platform has a set of unique subscriber expectations that should be adhered to by retail marketers. One of the most valuable tools in email marketing was giving subscribers the ability to give input on frequency, topics of interest, and other information allowing marketers to improve the message and meet expectations. Some social media platforms allow for this type of input and segmentation.

When the brand doesn’t take advantage of targeting and blankets the subscribers with everything is when interest goes down and unsubscribes go up.

"“Authenticity. If you can fake that, you’ve got it made.”"

"Authenticity and respect — if shoppers perceive the lack of either of these on your use of social media, your efforts will backfire."