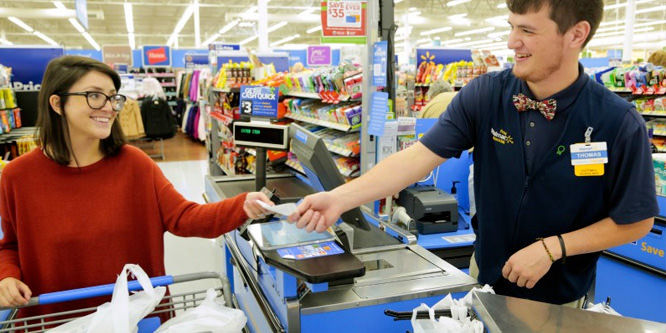 Walmart is looking to motivate new associates with faster pay hikes while placating senior workers bothered by the steady wage upgrades for newcomers.

As first reported by The Wall Street Journal, new employees now need only three months of training to see their pay hiked to $10.00 an hour from $9.00. Previously, the “Pathways” training program lasted six months.

A number of “listen sessions” with associates last year indicated the faster promotion was needed to help new associates stay engaged and “feel more confident in job skills,” according to the report. Beginner associates will also begin training with managers on the selling floor more quickly than before.

In April 2015, Walmart raised entry-level pay to $9.00 — a 24 percent increase from the U.S. minimum wage — with a stated goal of raising customer service levels. Newly hired managers, who previously started at $13 an hour, began receiving $15. The higher entry-level pay structure came amid a tightening labor pool.

Walmart’s improving results in the U.S. over the last two years have been traced at least in part to improving customer satisfaction scores.

The pay incentives for senior workers come as some have grumbled that the pay hikes have been largely reserved for new employees. Judith McKenna, chief operating officer of Walmart U.S., told the Journal, “I think it’s going to be an inevitability of businesses.”

A Bloomberg article from 2015 initially detailed how hundreds of comments on Walmart’s Facebook page showed senior workers were upset that less than half the workforce would be getting raises.

According to the Bloomberg and Journal articles, Walmart has been working to appease senior workers by giving them more desirable hours, more paid time off and offering training programs to help them advance their careers.

DISCUSSION QUESTIONS: Do you think it is more important for Walmart to hike wages for entry-level workers versus senior staff? How should Walmart handle any resentments from longtime workers?

Please practice The RetailWire Golden Rule when submitting your comments.
Braintrust
"Compensation is almost always a thorny issue and Walmart is having to walk a delicate balance."

"Walmart is doing the right thing by recognizing the need of entry-level workers, who will be largely Millennials, to feel like they are progressing..."

"Wage compression is an unfortunate byproduct of increasing entry level wages. Certain roles are worth X amount of money to any company."

Compensation is almost always a thorny issue and Walmart is having to walk a delicate balance. Providing entry-level workers with higher starting wages and faster wage increases will help attract and retain employees. This is a good move. Naturally there can be resentment on the part of existing employees, and their needs also need to be considered. However, when you consider that Walmart employs some 2.1 million people worldwide and 1.4 million in the U.S., a few hundred disgruntled senior employees venting on Facebook sounds manageable.

It’s important for Walmart to take care of both entry-level and long-time staff. Paying managers more is a step in that direction. Not only does this move address long-time worker resentment, it allows those workers to come off government subsidies. For too long, Walmart and other minimum wage company workers have had to rely on these subsidies to get by. This move is smart for Walmart and smart for the country.

Higher wages would just mean workers would want less hours. Those government subsidies can be quite lucrative. A dollar or two more per hour could mean the loss of $5 per hour in the value of government subsidies. It’s sad and unfortunate to see someone turn down a promotion because it would punish them financially. Sadly many must request less hours after getting a raise or they find they are working extra hours for free when they seen their entitlements reduced.

Pay is always going to be an emotive subject. Walmart is doing the right thing by recognizing the need of entry-level workers, who will be largely Millennials, to feel like they are progressing quickly. However, it’s not only pay that motivates this generation — I wonder how much internal research has been done to really establish what it is workers most want. It may be different across the various demographics. At best you can only hope to appease a certain percentage of the workforce and there will always be the community that will complain about pay. Maybe there are other ways therefore to get the balance.

Wage compression is an unfortunate byproduct of increasing entry level wages. Certain roles are worth X amount of money to any company. It often seems unfair to employees in those roles that the new kids on the block are getting compensation that took them a long time to earn.

Walmart is working to address this by offering a mix — non-financial benefits and a one-time lump sum payment. With all the pressure on Walmart and other retailers, restaurants, etc. to raise starting wages this is an issue that will not be going away anytime soon.

These are all small and petty pay issues. When you are paying less than $20 a hour, everyone is disgruntled. You will never make them happy. No one is grinning coming into work thinking “woo hoo, $13 a hour!” Large-scale big box stores do the best they can but the sub-$20 per hour work force is a complicated demographic of entry-level employees, people with unfortunate circumstances in their life, uneducated, disabled, and often people relying on government assistance. Maybe for Walmart it is best to focus on entry-level workers. Senior-level workers often buck the trend of high turnover which fits the Walmart business model. Maybe Walmart would rather see them move on and maybe that’s why Walmart is choosing not to take care of them.

The question depends on what you call senior staff. If you ar referring to people in management roles it is very different than if you are talking about front-line workers who have been with Walmart for a long period of time.

Front-line employees who have reached the top of the pay scale deserve more because they are still the most productive members of the team. Otherwise I have to presume they would still not be on the team. This is a group that any company can ill afford to lose.

Entry-level workers should get faster pay raises than senior staff since there are many components which are necessary to placate entry-level workers as well as retain them and incentivize them. Senior-level workers need less-frequent incentives, yet still need attention.

If they’re looking for new blood in the stores or in headquarters, this is a great move. Or if they do a good job of placating tenured employees, it won’t matter as much internally. It’s also a good move to attract BETTER talent in my opinion.

I think it’s a good move. Having better talent at store-level and perhaps more digital natives on board as a whole is only going to make Walmart more competitive in the long run.

Walmart has a very sophisticated performance review process for all employees, with wage increases that are calculated based on achieving outlined benchmarks. By allowing newer employees faster advancement, the company is investing in the long-term potential of newer workers and not risking that they will change jobs over a $1 an hour pay gap shortly after completing the employment process. Longtime workers at Walmart have always had the potential to apply internally for other jobs and roles within the company, pursuant to past performance reviews, so that longevity and upward mobility are both supported and encouraged.

Braintrust
"Compensation is almost always a thorny issue and Walmart is having to walk a delicate balance."

"Walmart is doing the right thing by recognizing the need of entry-level workers, who will be largely Millennials, to feel like they are progressing..."

"Wage compression is an unfortunate byproduct of increasing entry level wages. Certain roles are worth X amount of money to any company."