Walmart’s grocery biz is driven by demand, not by do-gooding 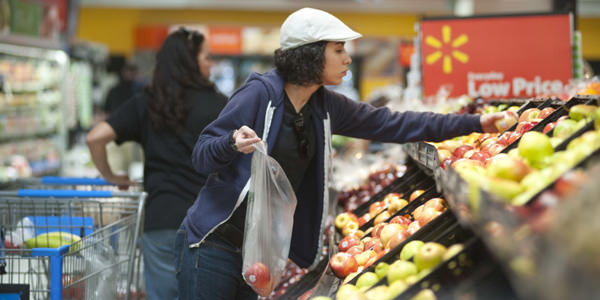 Through a special arrangement, presented here for discussion is a summary of a current article from the Spieckerman Retail blog.

Walmart has earned some praise in the mainstream press for democratizing organics, particularly from a price perspective. But Charles Redfield, Walmart’s EVP of its U.S. food division, said it still boils down to supply and demand.

On the supply side, it takes three years for a farmer to transition a field over to organics, so expanding assortments takes time, Mr. Redfield said in a recent presentation to the Bentonville Bella Vista Chamber’s WalStreet supplier group.

But it was the demand side of the conversation that revealed what could be considered a contrarian strategy, given other retailers’ recent moves. For example, Target and CVS have both taken a somewhat dictatorial stance on emphasizing healthier options. Target put major suppliers on notice and changed up assortments, while CVS eliminated tobacco in its stores and backed its decision up with an anti-tobacco crusade. Both moves were supported by shifts in consumer sentiments to some degree, but the magnitude of the changes that these retailers implemented veered toward shaping behavior, not just responding to demand.

Walmart has found success on the value side with two-for-a-dollar fruit pies as well as a three-pound “Sasquatch” pizza for under $10.00, Mr. Redfield said the company still “over-indexes on belly-fillers.” Clearly, Walmart isn’t wagging any fingers

Mr. Redfield made it clear that Walmart will lean into organics, natural, gluten-free, non-GMO and other movements only to the degree that its customers support them.

His overall presentation detailed the many investments Walmart is making in in-store presentation, sourcing, and its overall organizational structure to “grow and win for the long term.” Walmart will launch a “sensory food lab” prior to its upcoming shareholders’ meeting to help shift from simply selling a lot of food to instilling a true “food culture” within the organization.

Walmart also hasn’t wavered in making price leadership its top priority. Today, shoppers can easily validate retailers’ price claims online, and, according to Mr. Redfield, they “check it a lot.”

To what degree should organics expansion be driven by consumer demand versus pushed to support do-good ambitions? Does a healthy-for-you positioning work for or against retailers?

Please practice The RetailWire Golden Rule when submitting your comments.
Braintrust
"The expansion of organics should be nearly 100% based on consumer demand. Too many retailers have tried the push initiative and found themselves with significant losses."

"While I personally support this do-good approach, it doesn’t come without risks. The key here is giving the consumers a choice and creating an incentive for a healthy market basket."

16 Comments on "Walmart’s grocery biz is driven by demand, not by do-gooding"

It should be totally driven by consumer demand — welcome to capitalism. If the retailer has a “healthy for you” positioning, like Sprouts or Whole Foods, that’s fine (if you make a living at it). For traditional grocers (and I include Walmart and Target in this), you can’t send mixed messages. Make healthy available, but don’t push the concept.

The expansion of organics should be nearly 100% based on consumer demand. Too many retailers have tried the push initiative and found themselves with significant losses. I do think the healthy-for-you position does work, but only in certain demographics and only when the consumer response warrants it.

“Healthy for you” positioning depends on the retailer: Panera yes, Burger King no. It’s valid for Walmart and Target to take diverging paths toward selling more organics and healthy food. One chain (Walmart) specializes in “We know what you want,” while the other (Target) practices “We know what’s good for you.” In defense of Walmart, pushing organics at price points meant to stimulate further demand is providing a consumer benefit even if the company isn’t using it as a branding tool.

It should be driven by demand mostly. Assortment and merchandising decision is the lifeblood of retail. You can always dedicate a small part for experimentation and community support, but the business cannot survive if it is too far ahead of consumer demand and doesn’t align to it.

CVS’s decision to stop selling cigarettes is far different than Walmart’s decision to let consumer preferences dictate what food products it will stock. There is no question that cigarettes kill. There is a question about the benefits of many organics. Retailers should not become food police, but they can educate consumers about healthy eating and then let consumers decide.

This is a business decision in a business environment. If a retailer’s customer demands healthy products then they will vote with their dollar votes in their stores. If not, they will go to other retailers for their needs. Target’s position on forced requirements or mandates for their suppliers dictates another perspective which most retailers don’t take (thankfully).

The mantra for retailers is put the consumer first. Following the principle would tell you that consumer demand should drive product selection. The support of do-good ambitions may generate feel-good PR but not sales or profits depending on the retailer’s positioning.

“Healthy for you” works or doesn’t depending on the retailer. My expectation is that all its competitors would love to see Walmart shift its grocery mix in that direction. They would gain back the business they lost to them over the years. The impact on someone like Whole Foods would be minimal.

Let’s get “do-good” out of the equation. Whole Foods exists because they have a “healthy for you” position that they identified a long time ago. That is what they stand for and that is why people shop there. It is all based on demand. It matches their constituency. At Target, I am quite sure “healthy for you” while providing healthy alternative for customers, does not match the bulk of their customers. Maybe one day it will, but are Target customers going to Target because they have “healthy for you”? Target should be taking the Walmart approach. Walmart has identified a niche (yes, as much as we talk about it, it is still a niche). They know some customers want it and, because of their pricing philosophy, they give it to their customers at a good price. That niche may grow into something massive, then there will be more products available based on demand. But not today. And just a comment on CVS. They did not drop tobacco products because they are do-gooders. They determined that… Read more »
0
|
0
-   Share

It is interesting to hear that in the big scheme of things Walmart is still driven by supply and demand. There seems to be a disconnect from new product initial demand by store location that should have been addressed by now. What we might look to in the search for the root cause of this dilemma in the distribution center locations. Walmart is still supporting distribution center location and logistics largely based on mid-20th century demographic design practices. The system is devoid of any e-commerce input and need. On the other side e-tailers are finding that distribution is in fact subject to transportation practicalities that in the initial boom years were a lower priority for growth. The present day trends for safer and more earth-friendly products is a solid case study to show how poorly the big boxes are capable of enjoying the profits from new products from start up markets. Smaller companies with aspirations for a national or world expansion might look at this and the problems of the one-world hamburger when building their… Read more »
0
|
0
-   Share

Walmart, like all retail businesses, exists to serve their customers. Any suggestion that they should push what’s good for clients over what clients want is folly.

In many cases I would say consumer demand wins. I am holding back a bit here because our eating habits have gotten so bad and I am supposing that may be a big case for Walmart.

If they get behind healthier foods and can start educating their customer base, then I say more power to them. Just take baby steps don’t go whole hog.

We live in a free society and hopefully it will stay that way. Let the consumer decide how and where they will spend their money. I love the fact that I have the choice to shop at CVS or Walgreens and they take a different approach to marketing.

As with any consumer product, demand drives sales, which drives retailer investment (shelf space, inventory, DC investment and labor). Saying that, a retailer must also stay on top of trends and invest forward on products showing strong sales trends. To alert customers to this investment and attract them to their stores, retailers must invest in marketing to do so, especially if the competitive space for these products is also heating up. Walmart had not traditionally been recognized for their forward investment in trending food categories, nor have they invested in gaining that recognition. Their future success in attracting younger and more health-conscious consumers will depend on them improving their marketing position on those products beyond a simple shelf flag, which are not executed consistently across their store base.

The Target and CVS “push” strategy to promoting healthy assortments and options to consumers is a theoretically and philosophically sound approach to improving the health of society. While I personally support this do-good approach, it doesn’t come without risks. If retailers push too hard or shift their assortments too aggressively to the organic/healthy options, there is a risk that consumers won’t jump on board and retailers could be saddled with excess inventory and spoilage. On the positive side, the proactive promotion and “push” of healthy choices by leading retailers may result in more media coverage, greater brand awareness and positive consumer perception. On the flipside, the “pull” strategy employed by Walmart is a safe approach that is driven by what consumers want and demand. While this approach does not help change consumers’ habits to be more healthy, it is definitely a financially safer approach for retailers. Stocking what consumers want and are most likely to buy, is less likely to result in excess inventory costs and is matching their preferences. The key here is giving… Read more »
0
|
0
-   Share

The trick about “healthy-for-you” is that “healthy” is in the eye of the beholder-consumer. 8 in 10 U.S. consumers enter a grocery store with health on their minds, but still build a cart of healthy- and not-so-healthy foodstuffs. The store must know its customers — and thereby be doing good in their eyes.

Clearly, this should be driven by consumer demand. It is a for-profit company. That said, it is useful and helpful to support healthy options and makes good business sense for some others as well, but no need to push it.

Braintrust
"The expansion of organics should be nearly 100% based on consumer demand. Too many retailers have tried the push initiative and found themselves with significant losses."

"While I personally support this do-good approach, it doesn’t come without risks. The key here is giving the consumers a choice and creating an incentive for a healthy market basket."