What can Yogi Berra teach retailers? 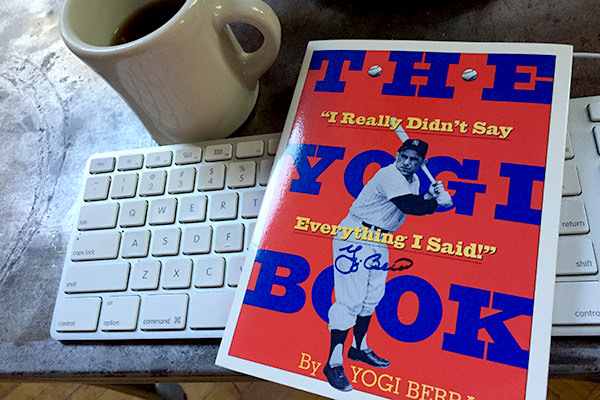 Yogi Berra, the Hall of Fame player for the New York Yankees, World War II hero, commercial pitchman and everyman philosopher, passed away on Tuesday at the age of 90. The news brought great sadness to those who knew Mr. Berra and countless others who never met him, but felt as though they knew him anyway.

Many who expressed sadness at his passing were born too late to see Mr. Berra play the game he clearly loved. As a player, he won 10 World Series titles, a record that will likely never be matched.

Some may have known him as a coach and a manager for his beloved Yankees as well as the Mets and Astros. Others may have seen him in commercials for brands ranging from Yoo-Hoo to Aflac.

But almost all who knew of Mr. Berra did so as a result of his oft-quoted Yogi-isms, profound observations spoken in a language that was distinctly his own. Some of those have relevance for retailers and the business of retailing. Here are a few of my favorites.

1. "No one goes there nowadays, it’s too crowded." This always makes me think of Trader Joe’s, which is known for busy stores and woefully inadequate parking. I can personally attest to having abandoned shopping trips to the local store after having made several trips around the lot without finding a place to park.

2. "It was impossible to get a conversation going, everybody was talking too much." Listening is the key to communication in any organization.

3. "You’ve got to be very careful if you don’t know where you are going, because you might not get there." A strategic plan communicated clearly throughout the organization is fundamental to achieving successful outcomes.

4. "Always go to other people’s funerals, otherwise they won’t come to yours." Retailing is fundamentally a people business. Those that demonstrate a sincere interest in the needs of their customers and associates will receive as much or more in return.

5. "If the world were perfect, it wouldn’t be." This quote always reminds me of Voltaire’s, "Don’t let the perfect be the enemy of the good." Retail organizations should be focused on achieving excellence, but sometimes good is really good enough.

6. "When you come to a fork in the road, take it." Management needs to trust in the plan and its people. Don’t fear making mistakes. Go for it.

What wisdom can retailers take away from Yogi Berra’s career and Yogi-isms to improve the performance of their businesses? What is your favorite Yogi-ism and what are its implications for retailers?

Please practice The RetailWire Golden Rule when submitting your comments.
Braintrust
"Not everyone can bring Yogi’s level of fame and goodwill to their own "second acts," but nobody should be afraid to take the plunge when the time is right."

"Once his beloved wife Carmen asked him where he wanted to be buried. His typical Yogi answer, "I don’t know, surprise me." Yogi will be missed by many."

8 Comments on "What can Yogi Berra teach retailers?"

It’s hard to know where to start with the Yogi-isms, so I don’t have much to add to what George said. These pearls of wisdom are relevant not only to retail but to almost any walk of life.

As to life lessons from Yogi’s career, he defined the idea of a successful “second act.” In his case, it involved staying engaged in the sport that he loved, but also finding other avenues for his energy and passions — from TV ads to nonprofit work. Not everyone can bring Yogi’s level of fame and goodwill to their own “second acts,” but nobody should be afraid to take the plunge when the time is right.

Yogi Berra lived a very full life and touched many along the way. His incredible baseball career, wit and wisdom will live on forever.

My favorite Yogi-ism is this, “You can observe a lot by just watching.” I often use this line (or a slight paraphrasing) to inspire retailers to enhance the consumer experience they deliver by truly looking at it with a fresh perspective. There is absolutely no way to bring positive change from a boardroom … it requires firsthand observation.

There are so many wonderful Yogisms out there and my all time favorite is “The future ain’t what it used to be.” One that may be relevant here is, “How can you hit and think at the same time?”

In a fast-paced industry like retail, we need to do more of this seeming contradiction of both thinking and hitting (executing) and not separate these two activities between headquarters and stores, respectively.

I am one of those fortunate enough to have seen Yogi as a player when the Yankees were winning during those big Bronx Bomber years. I was a huge fan of the Yankees and in particular Yogi. He was an everyday person. No put-ons. No airs. A family man and a fan favorite.

I read an article about him in our morning paper. Once his beloved wife Carmen asked him where he wanted to be buried. His typical Yogi answer, “I don’t know, surprise me.” Yogi will be missed by many.

“It was impossible to get a conversation going, everybody was talking too much.” I often find in business and social conversations that nothing meaningful happens because people are too busy defending their points of view, thinking up what to say next or talking over each other. Besides the fact that Yogi was a great player and manager, had some funny things to say and was apparently a nice guy. He also had a lot of common sense, which often goes missing in retail today due to the overuse of data and analytics.

While voluble in the best way imaginable, Berra certainly had a bias for action. His complaint (to then Yankees manager Casey Stengel, as I recall), “I can’t think and hit at the same time,” stands as sound advice to every manager who is tempted to press talented employees into a soul-sucking mold. Sometimes its far better to let their natural good instincts take over.

For brick and mortar operators, “You can see a lot just by looking” stands as perhaps the highest wisdom of all. In-store sensing is the most overlooked discipline in retailing—and the greatest opportunity to drive competitive advantage.

I return to my DIMES framework for in-store sensing: Demand, Items, Messages, Employees and Shoppers: Performance depends on sensing.

Apparently Mr. Berra didn’t really originate most—maybe even any—of his famous “Yogisms,” but that fact actually leads me to my retail tie-in: innovation isn’t everything…it’s better to be good than first.

One of my favorite people and cartoon characters! “It ain’t over till it’s over!” That’s what I think during every holiday selling season. There’s always one more item to promote to capture incremental sales.

Braintrust
"Not everyone can bring Yogi’s level of fame and goodwill to their own "second acts," but nobody should be afraid to take the plunge when the time is right."

"Once his beloved wife Carmen asked him where he wanted to be buried. His typical Yogi answer, "I don’t know, surprise me." Yogi will be missed by many."