What do mixed consumer reviews mean for the future of tech? 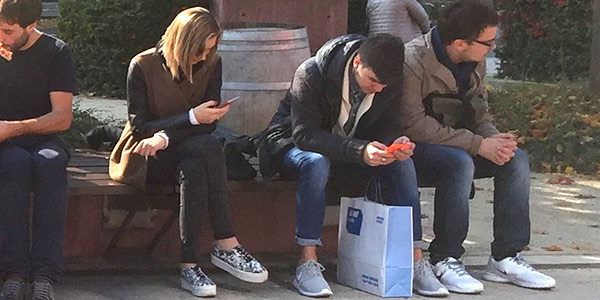 Through a special arrangement, presented here for discussion is a summary of a current article from MarketingCharts, a Watershed Publishing publication providing up-to-the-minute data and research to marketers.

While many retailers zoom into more of a digitally driven future, a recent Harris Poll shows Americans are somewhat wary of how technology is changing aspects of their lives.

The poll showed that strong majorities of Americans believe technology is creating a lazy society (73 percent), has become too distracting (73 percent), is corrupting interpersonal communications (69 percent) and is having a negative impact on literacy (59 percent).

On the other hand, strong majorities believe technology has improved the overall quality of their lives (71 percent) and has encouraged people to be more creative (68 percent).

Not unsurprisingly, Millennials saw a bigger benefit to having technology enmeshed in their lives, including:

How concerned are you about the increasing adoption of technology among consumers? Do you see more drawbacks or more benefits? What lessons can retailers and tech brands glean from these consumer concerns?

Please practice The RetailWire Golden Rule when submitting your comments.
Braintrust
"While we may disdain some of the effects of increased technology we continue to embrace and use it in our lives. The data on Millennials (now the largest U.S. generation) gives further credence to the increasing adoption rate of technology."

"On the instant poll, I believe the category "all of the above" should be available. I suppose they said the same thing with the invention of the telephone, the TV, the personal computer, and then smartphones."

13 Comments on "What do mixed consumer reviews mean for the future of tech?"

The survey says: Consumers love and loathe technology. Nothing new here. Different demographic groups regard and use technology in different ways. Utility is in the eye of the user.

This is another example of a difference between attitudes and behaviors. While we may disdain some of the effects of increased technology we continue to embrace and use it in our lives. The data on Millennials (now the largest U.S. generation) gives further credence to the increasing adoption rate of technology. I definitely see more benefits than drawbacks.

Two areas noted in this research represent an opportunity for retailers and tech brands: Learning new skills and offering customers the ability to live life they way they want. Positioning your brand to address one or both of these needs/wants can provide a meaningful differential advantage.

We want consumers to adopt technology and we want to interact and communicate with them through these technology channels. Are there drawbacks? Sure. The consumer may opt to stay online versus visit in-store. That takes some of the human connection out of the experience. But if you can somehow deliver an online experience that captures emotions and engages the consumer, you win. A good example, because I’ve been recently experiencing them, is the Dollar Shave Club. I love how they communicate with me and make me feel a sense of belonging — and I’m just spending a few dollars a month with them. They are an excellent role-model and case study.

Maybe it’s just me, but I find these reports with percentages of this and percentages of that somewhat difficult to make practical sense of. Sometimes the lesser percentage is used and sometimes the majority finding is presented. There’s always an agenda behind how survey results are shown. The one thing surveys rarely do is answer the question: “So what?” I’d like to see consistency in how percentages are used. For example the article states: “Over four in 10 also say technology has a positive effect on their … relationships, happiness, etc.” Can we have a rule that the majority percentage is reported? In this case: 60 percent say technology has a negative effect on their relationships and happiness. Doesn’t that sound a lot more important and urgent? What this says to me is that there’s a huge special interest group out there desperate to make technology the savior of our very souls. Sadly the more we lean toward the inhuman, the more we move away from the human, who we really are and what we… Read more »
0
|
0
-   Share

Whether we like it or not, the adoption of technology by consumers will continue to increase with both positive and negative consequences. Reality is that consumers have more access to information and interaction spanning great distances and time through technology than ever before. Social norms are adjusting to change with technology, what was once negative (multitasking and inattention) is now the norm. Retailers and tech brands can and will leverage these devices to reach and maintain contact with shoppers and continue to evolve techniques and platforms.

Technology is and will continue to be a fact of life. The question is, how will we use it to our benefit? If it helps the customer have a better engagement with the retailer, great. If it helps the retailer better manage their business and communicate with their consumers, even better.

The issue that causes consumers problems is when the retailer misuses the technology and it becomes invasive to the consumer.

Retailers continually need to ask, how is this helping my consumer? If it’s not, then they should question why it’s being done.

As much as consumers may voice concerns in surveys, I don’t see a majority avoiding the use of technology in their lives. Few people I know do not take advantage of the conveniences these technologies provide.

Technology has certainly had deleterious effects on communication, literacy and focus. It translates to the retail workplace. Here follows my tale of illustration: My wife and I are both aspiring foodies. Two Christmases ago I headed to an upscale non-chain kitchen specialty store at our regional mall prepared to shell out well over a grand for items from our collective wish list to put under the tree. I like interacting with people during the shopping experience as well as the reassurance of previewing, touching, and comparing products in my decision process. Service remains part of my value equation. So, I consciously choose to shop (and buy) from local merchants whenever this makes sense. When I walked through the door, I realized I was their only customer. The preoccupied clerk stood with her back to the door tapping on her smartphone. It was several minutes later before she made eye contact and acknowledged my presence. I landed on a display with several sets of pots and pans, and turned to wave for the clerk to ask… Read more »
0
|
0
-   Share

In response to Richard George’s interesting comment about retailers/brands helping consumers learn new skills and live life the way they want: I still think the large retailers have a long way to go to be truly customer-centric and focus on this. I would say Home Depot is doing the best job of it among the retailers I shop, and Target seems to have some interesting innovations around these themes. And with Target just signing with TechStars to embrace outside innovation from startups, I would expect to see them moving “closer to the customer” in these areas in ways we can’t yet imagine.

Who yet knows what the minds of the Millennial entrepreneurs in this program will hatch for Target? Maybe something like an interesting site for learning, life and shopping like TheArtOfManliness.

I’m not sure how much sense this makes in the context of “consumers.” I might be concerned in the context of how these (allegedly) negative influences affect “citizens” or “voters” or — that ever-reliable source of angst, “my/America’s children” — but I don’t see any of this being an issue for retailers.

On the instant poll, I believe the category “all of the above” should be available, i.e. increasing adoption of technology among consumers is creating a lazy society, has become too distracting, and is corrupting interpersonal relations. I suppose they said the same thing with the invention of the telephone, the TV, the personal computer, and then smartphones. I’m sure retailers have to “get with the program” or go extinct, as we’ve already seen, with each giant step in technology. I’m not saying I like it, but this is the way of the world.

When people come up with a market plan that fails to perform and remains lackluster after tweaking and redirecting actions are non responsive look for blame to happen. The open for endless availability blames include things like predecessors, weather, economics and vendors. When these blames are unsubstantiated or valueless then we turn to the new stuff going on like newspapers, billboards, radio, television and now the internet. The pain and letdown of corporations looking inwardly to asses the company’s ability to use the tools available properly is, while necessary, never embraced as a path to reach market plan reconciliation and approval from the consumer(s). Isn’t it interesting that companies will broadcast absolute dedication to satisfying any and all customers and tolerate a market plan that is simply not working? This may be part of the reason for the seemingly endless supply of disparaging consumer reports that somehow go viral. A part of the remedy for these problems might be found in how a company rewards key executives. If this is not practical outsourcing some or… Read more »
0
|
0
-   Share

Without a doubt, the usage and types of technology will continue to increase and spread through the consumer base. The challenge for retailers is optimizing technology and using it in ways that are relevant to consumers, and advantageous to retailers. If retailers want shoppers to receive a piece of content, an offer for example, the type of technology and method of delivery must resonate.

I think that largely, technology is beneficial to both consumers and retailers. However, it is a beast that must be understood and analyzed.

Braintrust
"While we may disdain some of the effects of increased technology we continue to embrace and use it in our lives. The data on Millennials (now the largest U.S. generation) gives further credence to the increasing adoption rate of technology."

"On the instant poll, I believe the category "all of the above" should be available. I suppose they said the same thing with the invention of the telephone, the TV, the personal computer, and then smartphones."