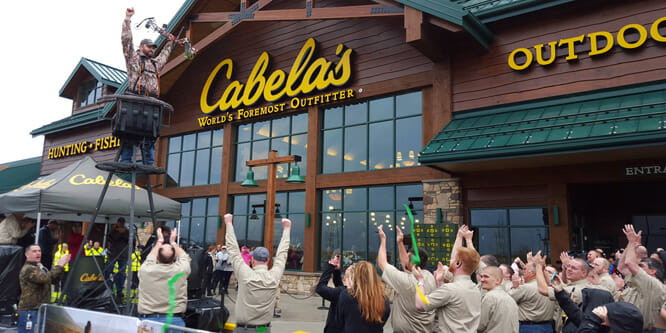 In the city of Sidney, NE, about a third of the city’s residents have been on edge since October 2016 when Bass Pro announced it would purchase their hometown employer, Cabela’s.

About 2,000 of the city’s 6,800 residents work at Cabela’s and many Nebraskan newspapers as well as local legislators have fretted about the loss of many jobs in their community. Bass Pro’s headquarters are in Springfield, MO.

As with any merger, Cabela’s has to worry about both employee morale and possible customer backlash, but in this case, the problems seem to be on a larger scale.

At a meeting at Cabela’s headquarters about a week after the merger announcement, Bass Pro CEO Johnny Morris reassured Cabela’s employees that Bass Pro would retain a “significant” base of operations in Nebraska. But he added, “We don’t want to make false promises, because there’s gonna be change, there’s gonna be some slimming down.”

The deal finally closed on September 25 and more details on the transition arrived last Thursday in an 11-page letter to Cabela’s employees.

In the letter, according to the Omaha World-Herald, Mr. Morris noted that 1,000 outdoors-related stores have closed in recent years while highlighting Cabela’s declining sales, losses and exorbitant corporate overhead. He added, “It is now time for a new approach and to turn around the strategies that did not work.”

He noted that an additional $10 million has been allocated to extend benefits and pay for employees who may lose their jobs.

At the same time, the letter noted that a number of jobs, including Cabela’s information technology division, a call center, and a “significant” part of Cabela’s accounting operations, will remain in Sidney. Other positions are still being evaluated.

Employees in Sidney will be consolidated into one of the Cabela’s buildings. Empty buildings on Cabela’s campus will “effectively be donated” to the city of Sidney. Bass Pro will lease them for $1 per year to any qualified businesses opening an operation in Sidney.

Mr. Morris wrote, “One of our biggest priorities is to be as thoughtful to Cabela’s outfitters and the City of Sidney as we possibly can, and go above and beyond what is required to be very fair and supportive.”

DISCUSSION QUESTIONS: What’s your general advice on softening the blow of pending layoffs on employee morale amid mergers? Is the strategy for shoring up public support for any merger-related changes generally the same? Any advice for Bass Pro?

Please practice The RetailWire Golden Rule when submitting your comments.
Braintrust
"Providing longer lead time, support in finding alternate jobs and a good severance plan all will help in softening the decision."

"Based on comments to date, we may assume Cabela’s management has negotiated on their community’s behalf."

"This type of event is never easy. But honesty and compassion are the best combination to get through it."

10 Comments on "What does Bass Pro owe Cabela’s hometown?"

This is never an easy task and it sounds like Bass Pro is managing it well. Let’s face it, when your business gets acquired it can be demoralizing, particularly for long-term employees who have built their careers with the company. Bass Pro appears to be candid and detailed with their plans and frankly that’s the best any employee can hope for under the circumstances.

This merger will not be without its job losses. Field personnel and some IT personnel will remain. But many other corporate jobs are just mere duplication and probably unnecessary. Not an easy task for Bass Pro Shops’ executives. A candid approach is probably the best policy. Customers should hopefully not see the difference in ownership, except for the better.

This type of event is never easy. But honesty and compassion are the best combination to get through it.

As a native Nebraskan who grew up with Cabela’s when they were a cataloger, it is very hard to watch what will happen to the town of Sidney. Beyond job losses, peoples lives will be drastically altered. Whole families depend upon Cabela’s for a livelihood … and health insurance. Jobs lost will impact multiple other businesses across the community and area. The other reality is that Cabela’s headquarters are overbuilt, and in a location off the beaten path. Bass Pro is a business that has to generate a return for shareholders. They must reduce staff and close non-performing stores in order to survive. From what has been reported, the letter from Mr. Morris has the right tone and some offers of assistance in transition. Bass Pro’s actions are understandable and make economic sense, but on the ground in Sidney it is very tough to look into the eyes of those who have had their lives turned upside down. A key reminder is that it is NOT Bass Pro’s “fault.” There were many Amazon boxes and… Read more »
0
|
0
-   Share

Providing longer lead time, support in finding alternate jobs and a good severance plan all will help in softening the decision. As with communication of the structural changes, it is best to make the announcements all at the same time about the layoffs instead of communicating changes little at a time. This will reduce additional anxiety for Cabela employees.

It sounds like Bass Pro Shops is showing sensitivity to the fact that this will have a huge effect on the community that was the home of Cabela’s, where the retailer has been a source of growth and employment in Sidney for many years. The idea of turning buildings on the Cabela’s “campus” into new businesses is extremely generous, as is the compensation plan. I don’t think the switch will affect changes universally; and I wish Bass Pro Shops well in the jungle that outdoor shops has become.

Usually companies tell everyone there will be no changes. They repeat this message for as long as possible. Strategically they tossed out a $10 million figure but we all know that doesn’t go too far per-employee. I have no advice for Bass Pro. They have already exceeded my expectations.

Based on comments to date, we may assume Cabela’s management has negotiated on their community’s behalf. They, more than anyone, understand Bass Pro owes nothing to Sidney.

“Exorbitant corporate overhead” = “too many HQ employees.” Suffice it to say it’s a euphemism for “lots of you are going to be let go.” (And with a seeming 25HQ employees/store, staffing does seem … generous).

I don’t know that there is any (one) “best” approach, given the large number of reasons that mergers occur. In the typical hedge fund/greed-driven version, I’m not sure there is any good way, as the reality — “we just want to make $$$ and don’t give a #$%^ about anything else — isn’t going to impress, regardless of how it’s told. But in a case like this — for want of a better term, “legitimate downsizing” — gentle candor is probably the way to go.

Softening the blow to those folks in Sidney can be done by sharing some of the business reasons for making those changes. Let’s face it, some operations remaining beats bankruptcy. Sounds like Bas Pro is doing some of the right things to soften the blow, even though they don’t have to. But the “right” thing to do is do what is possible to maintain the base of folks in Sidney, find creative ways to transition those folks to new roles, and also provide some help in finding new jobs outside the company. That’s just good stewardship for businesses.

Braintrust
"Providing longer lead time, support in finding alternate jobs and a good severance plan all will help in softening the decision."

"Based on comments to date, we may assume Cabela’s management has negotiated on their community’s behalf."

"This type of event is never easy. But honesty and compassion are the best combination to get through it."