What should retailers do to ensure seafood sustainability? 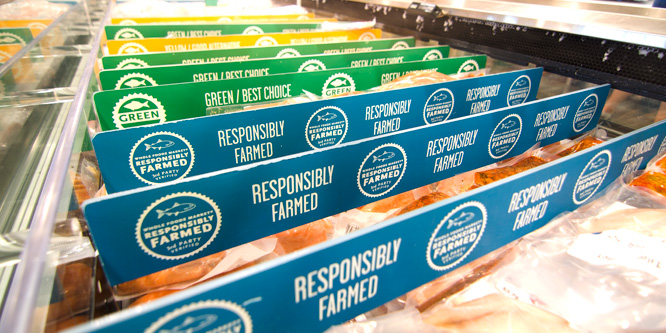 With a rising global population, and oceans under a variety of threats, Greenpeace recently released its 10th annual Carting Away the Oceans report and ranked 22 major supermarkets on plastics and seafood.

The organization found strong overall improvement on sourcing sustainable seafood, but little action on reducing single-use plastics. (Kroger announced the phasing out of plastic shopping bags after the study was released.)

Greenpeace says the equivalent of a garbage truck of plastic enters the oceans every minute, and complains that the use of plastic, primarily for packaging, will double in the next 20 years.  Retailers were ranked on criteria including policy, initiatives, transparency and inventory (banning the sale of species based on Monterey Bay Aquarium’s Seafood Watch list). Ninety percent of grocery retailers received passing scores, whereas none passed ten years ago.

Perhaps unsurprisingly, Whole Foods ranks at the top of the list with a score of 80.4.  Greenpeace commended the company for a sustainable tuna policy and prioritizing sustainable seafood in general.  Whole Foods was lauded for prominent signing and labeling that informs customers about sustainable options. The retailer was docked, however, for continuing to sell Chilean seabass and bigeye tuna, and also received negative marks because of continuing labor and human rights issues in the seafood industry, as well as use of single-use plastics.

Hy-Vee, ALDI, Target, and Giant Eagle round out the Top 5.

Wegmans, Albertsons, Sprouts, Ahold Delhaize, Meijer, Kroger, SUPERVALU, Walmart, Trader Joe’s, Costco, Southeastern Grocers, and Publix are mid-pack. Trader Joe’s, although near the middle, came in for special criticism. It dropped significantly since last year and was heavily criticized for committing to improve seafood sustainability eight years ago, but not yet having a “robust, public sustainable seafood procurement policy.”

At the bottom of the rankings is Wakefern, which received a score of 37.9.  The company was highlighted for a lack of transparency, and received the “Wrong Way” badge.

Greenpeace noted that Wakefern started a sustainable seafood program in 2014, but has provided little public information about its policies recently.  WinCo, H-E-B, Price Chopper and Save Mart are near the bottom.  Save Mart is the only other retailer to receive a failing grade (below 40).

DISCUSSION QUESTIONS: Are consumers paying attention to the sustainability — or lack thereof — of the seafood they purchase? Which areas (i.e., human rights abuses, illegal fishing, single-use plastic) will rise as the hottest issues grocers will need to address?

Please practice The RetailWire Golden Rule when submitting your comments.
Braintrust
"It should be table stakes for retailers and not something that has to happen through regulations."

"A single retailer doing something is not going to fix the problem — we need most retailers to do it all at once."

"Consumers are so much more conscious of their buying decisions, particularly around product sourcing, sustainability, ethical practices..."

13 Comments on "What should retailers do to ensure seafood sustainability?"

This is the usual “green” discussion, this time using seafood as the object of outrage. No, most consumers do not care about sustainability or illegal fishing or human rights abuses or single-use plastic. This doesn’t mean retailers should not do something positive about this, but don’t expect shoppers to flock (or swim) to your store because you are taking some steps. A single retailer doing something is not going to fix the problem — we need most retailers to do it all at once.

Sourcing information on seafood is very visible and staff is extremely helpful at Earth Fare stores here in the Carolinas. I believe more and more shoppers do care about this knowledge and transparency. It should be table stakes for retailers and not something that has to happen through regulations.

Trust and transparency in the grocery, meat and seafood industry are so critical for brands to maintain. Consumers are so much more conscious of their buying decisions, particularly around product sourcing, sustainability, ethical practices and the potential impacts to our family’s health. An increased amount of product choice and knowledge brings high expectations for the food industry on their sourcing practices.

The Whole Foods phenomenon and the rise of organic, sustainably sourced foods has raised the bar for the entire food industry. Grocers should be prepared to open their books and drive that trusting relationship with their customers. It’s not only the Millennials or Generation Z segments that are concerned about product sourcing. With all this information at our fingertips, the game has changed.

When every supermarket has an organic food aisle, the value of “green” vanishes.
Customers may be more aware of sustainability and sourcing, but they see most retailers taking at least some minimal steps towards this and it no longer differentiates Whole Foods or other retailers from the pack. Sourcing becomes more important at higher income levels and for a much smaller segment of the population. People on food stamps will be hard pressed to care about whether the tuna was caught illegally. The fact is that single areas (i.e. human rights, fishing, etc.) will not rise as hot issues at all, but a collective of these will continue to be important for a higher income segment — the problem will be that most consumers really won’t care how much so long as a minimum threshold is met.

Just a side note for naysayers.

Consumers still want great prices on everything, and the difference just in the cost of shrimp from the U.S. vs. Vietnam or China is around 40 percent more. In some stores it is not a problem, but for guys like me price wins every single time. We have some limited-assortment stores and our favorite big box store is selling beef from Mexico and, worse, dairy cattle fillets cheap, with zero flavor. It gets harder everyday to try and explain to consumers the difference in prices, but I take the time to answer their questions and set their minds at ease, which usually leads to a sale. I will stick with my USDA Choice beef program and continue to sell the deal shrimp and Tilapia — as it sells, whereas my efforts to sell U.S. shrimp have failed miserably. You must get to know your customer base and provide them with the products they can afford, but I will always try to provide exceptional values that meet my standards so my customers do not lose faith… Read more »
3
|
0
-   Share

At a higher level, seafood is such a small percentage of meat consumption in the U.S. that I believe a much larger impact will occur when a demand for sustainable beef and poultry becomes a serious effort. And not just a demand for sustainable livestock but also a movement asking what can be done for the environmental impact, which is currently a bigger challenge than carbon emissions from automobiles.

Food (seafood in particular) free of disease is a growing issue and one that could easily jab some downward revenue spikes into food retail revenues.

I think it is definitely a case of “you don’t know what you don’t know” and in the case of seafood sourcing practices there is not nearly as much awareness of the issues as there are with some of the other aspects of the grocery experience — i.e., single use plastic bags at checkout, organic produce, free-range farming.

(Perhaps this is also more of a Midwest bias I hold, as we are surrounded by crop farming and cattle so there is a higher level of visibility to these industries. But when it comes to fresh seafood, “how was it sourced?” seems to take a backseat to “how did it get here?” in most conversations with grocers/restaurants.)

Of course most customers don’t pay attention to these issues. In fact, hipster consumers are generally the worst when it comes to thinking through the impact of purchasing decisions … which helps explain the Chilean sea bass problem and why indigenous people in quinoa growing countries can no longer afford to eat a product that has been a staple of their diets for millennia. But the fact remains that at the rate we are going, multiple species of food fish will become virtually extinct and the oceans will choke on all the plastic waste we dump into them. What grocers need to do is not pick a, “hot issue,” because ecology isn’t a point solution exercise. The whole idea is that all air, water and land systems are connected in the end, so focusing on one connection really doesn’t begin to address a solution. What grocers could do is begin a fact-based consumer education program about the global impact of certain fishing and dumping policies and perhaps tie it to conservation efforts in the communities… Read more »
2
|
0
-   Share

I wish everyone well in their efforts, but I’m sorry to say I’m pretty sure the answer is “no.” The average person doesn’t see much connection between these issues — and more importantly, even if they do, won’t really be able to see what is being done about them (beyond unverified claims). Greenpeace, and retailers who wish to respond to them, have their work cut out for them.

One likely way retailers might weigh in on the “sustainable” seafood issue could be by spotlighting products from responsible aquaculture and pressing all suppliers to document their practices.

I’ve read that much shrimp from Asia, most Atlantic salmon, many oysters and pretty much all tilapia (freshwater cichlid) are not “wild” but spawned in enclosures. The farming practices for some of these products can be worrisome. There are loads of “exposes” about this issue on YouTube but also many posts that debunk some of the worst claims. How’s a consumer to sort this out?

Wild-caught fish are often preferred but can be more expensive. Rising global demand and irresponsible harvesting have put great pressure on fisheries.

Then there’s the pollution issue. Top predators like tuna and swordfish tend to accumulate contaminants from their prey, like mercury.

I think buying seafood can be mysterious for many shoppers. Grocers who offer clear guidance on sourcing, selection and preparation ideas will win trust and gain sales.

Braintrust
"It should be table stakes for retailers and not something that has to happen through regulations."

"A single retailer doing something is not going to fix the problem — we need most retailers to do it all at once."

"Consumers are so much more conscious of their buying decisions, particularly around product sourcing, sustainability, ethical practices..."