Why is Target making nice with Amazon? 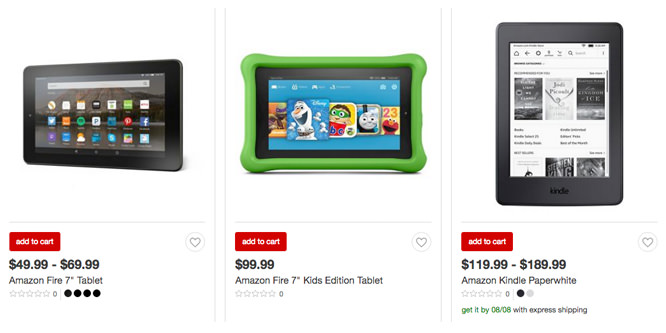 Back on Black Friday during the 2011 Christmas holiday season, Amazon.com’s Kindle was the best-selling tablet in Target’s stores. Less than six months later, Target’s management decided it would no longer sell Amazon brands. Now, however, Target is changing course. Yesterday, a number of Amazon devices, including the Kindle, Fire sticks and tablets, were back on target.com and Target plans to have the devices in all its stores across the U.S. by October.

When Target made the decision to ditch Amazon brands four years ago, it made sense. Why should the retailer sell the products of a company that it not only competes with in electronics but every other category, as well? The news that Target is bringing Amazon items back, industry watchers say, is a nod to reality. Amazon isn’t going anywhere and Target shares many customers with the e-tailer. Why not make some money keeping them at Target instead of just ceding the business to its rival?

Target issued a statement on its decision to bring back Amazon’s devices. “We know our guests love the many aspects of shopping at Target, and believe they will appreciate the convenience and savings of finding these items in our stores and on Target.com.”

Walmart followed Target by pulling Amazon devices from its stores and site in 2012. Others, such as Best Buy and Staples, have continued to sell Amazon brands.

Target and Amazon have had a complicated relationship over the years. Jeff Bezos and company provided the technology backbone and fulfillment for target.com when it relaunched in 2001. Target built and took over management of its own site during the holiday season of 2011 and immediately began running into bugs.

DISCUSSION QUESTIONS: What is your reaction to Target reauthorizing Amazon’s devices for sale in its stores and on its website? Is this a bigger win for Amazon or Target? Do you expect other retailers not currently selling Amazon devices to follow Target’s lead?

Please practice The RetailWire Golden Rule when submitting your comments.
Braintrust
"This is the new world where retail brands are built from consumer-driven preferences for what to buy, how and when to buy it."

20 Comments on "Why is Target making nice with Amazon?"

It’s about time. Trying to deny customers access to Amazon by not selling its devices was only hurting Target. It had little or no effect on Amazon.

I agree. Denying your customers the products they want, because you don’t know what else to do, was a poor strategy that needed to change.

I see this as a bigger win for Target. Like other retailers, they are laser-focused on emerging IoT and home automation trends, evidenced by the Target lab in Silicon Valley refocusing on these areas. With Amazon carving out arguably a leadership position in these areas with Echo, Dash, etc., Target wisely is choosing not to go head-to-head just with competitive vendors in these areas, but instead betting that if Amazon’s leadership makes their solutions the best sellers, Target needs to be on-board.

Not sure. I never would. They are selling a tablet that guides shoppers away from Target. If I were a retailer I would never let them in my stores. No matter the margin. Let my shoppers go to Amazon and get them — but they would come to my store to do the things Amazon cannot figure out — and never will.

Hey, I am a Prime Member and like Amazon — just cannot stand the way the press, retail or non-retail, thinks they are so amazing. Heck, I met Jeff when Amazon was barely a start-up and he would fly his dirigible balloon drone around the Retail Systems show (Friedman days).

YES! Target offers a shopping experience that shouldn’t have artificial boundaries from the consumer point of view. Restricting access to Amazon products doesn’t strengthen the Target brand, it weakens it. This is the new world where retail brands are built from consumer-driven preferences for what to buy, how and when to buy it.

Target is making a good move by offering Amazon products in its stores. Amazon devices will drive traffic into the stores and encourage sales of other products. Shoppers are savvy and know that virtually all products carried by Target are also available on Amazon. As long as Target is price-competitive and provides an excellent in-store shopping experience, Target will get its fair share of sales in its stores and on its e-commerce site.

Nice to see reality finally being acknowledged. Amazon is popular and if Target customers want its products then Target has to take the calculated risk and sell them. The biggest winners in all this are Target shoppers who now get access to another of their favorite brands. Amazon wins because it proves their market strength and Target wins because it gets to stop losing sales and upsetting customers. As to whether other retailers will follow, only if they are smart.

The bottom line of retail for the past 100 years is all about efficiency. What’s going on here is about the fundamental driving force of economics, which created the need for retail in the first place: Everyone does what they are best at, and then trades with others for what they are best at. Target just may be at the cutting edge of this, with both Amazon and CVS. For both Target and Amazon it is all about improving their own businesses, just as it was for Target and CVS. The evidence so far — based on their Seattle store — is that Amazon is making no serious efforts to get into the type of brick-and-mortar retailing Target is in. And I doubt that Target will ever be able to manage the “single item” retail that Amazon is super at. These types of “partnerships” may play a larger role in the evolution toward the convergence of online, mobile and brick-and-mortar retail. So far there is no serious operational competitor with Amazon, with their infinite long… Read more »
3
|
0
-   Share

As an addendum to Herb’s remarks, I also believe Target understands that ultimately the “elite” retailers will be dominant both online and in physical stores. With the recent announcement of Walmart possibly joining forces with Jet.com, Target is likely choosing their dance partner for the new competitive marketplace.

As I shared in the Star Tribune article, now that Amazon Prime is in its prime (near-ubiquitous), the risk of shoppers fleeing Target and heading to Amazon through the devices is lower. In other words, as the Prime membership base matures, Target can view Amazon’s offerings from a brand and product advantage perspective rather than through a competitive lens.

Target is well-known for its proprietary branding bent yet it is quite difficult to pursue this strategy in consumer electronics. By partnering with Amazon, Target gains a powerful brand (one that isn’t being emphasized at Walmart), and a growing selection of innovative hardware that it can pick and choose from.

The time is right as the risk is reduced.

Why, it’s just another one of those “purely coincidental timing … ” things that seem to be going around right now. Has nothing at all to do with Walmart’s stealth advances to Jet.com. Nothing at all. In fact, I’m pretty sure Target announced this back in January … didn’t they?

Way back when Sears chose to sell “national brands” in the appliance category, it was able to make the claim “no one else sells all the leading brands.” It was a relevant promise for the woman who was increasingly challenged to balance money and time.

Being shopper centric is smart for any retailer. Prime Day proved that Amazon now has a portfolio of brands rapidly increasing in demand. Like the KSS and UA discussion, this is a win win. Target can be more of a “one stop shop.” Amazon gains exposure in over 1,700 doors. Now that is reach!

Target is making a mistake. Amazon’s devices aren’t like other CE devices that merely seek to entertain. They about locking consumers into Amazon’s ecosystem. Target would be better off focusing its efforts on helping Apple and Google sell their own Alexa-like devices.

Target should do much more than just sell Amazon products; Target should leverage Amazon’s vast fulfillment and transportation capabilities in order to reduce the costs and complexity of their supply chain. Let me get straight to the point: Target, Walmart, Macy’s, Gap, etc., etc., are learning the hard way that it is extremely challenging to compete with Amazon. Therefore, executives should shift their thinking from “What is our Amazon strategy” to “How can we leverage Amazon to reduce our cost and complexity and achieve a competitive advantage?”

The biggest risk facing retailers is their inability to compete with Amazon due to Amazon’s size and massive product selection. Since Amazon will continue to grow in size and selection, retailers would be wise make Amazon part of their strategy vs. trying to compete head-to-head with Amazon.

Target likely shares a vast number of customers with Amazon, so why not give them what they want, when they want, and how they want. That is the definition of retail for shoppers.

A brick and mortar giant carrying popular items you’d normally have to wait 24 hours to receive? Always a good move. Amazon is a superstar and Target knows that if you can’t beat em, join em.

It is becoming clear that Amazon is not the threat to brick & mortar that Amazon has always claimed. My guess is that Target now sees this and sees an opportunity to make some good money selling those devices.

We should also look at the flip side: It’s more evidence that Amazon is desperate to get away from the shackles of pure play online. There’s far more profit to be made in stores than online. (Especially since their latest numbers show nice profit — but yet again none of it appears to be from their business that competes with retail.)

As Michael Corleone once said, “keep your friends close but your enemies closer.”

These sentences from the article say it all: “The news that Target is bringing Amazon items back, industry watchers say, is a nod to reality. Amazon isn’t going anywhere and Target shares many customers with the e-tailer.”

I think the convenience factor plays a major role here. This is great from the consumer’s perspective, but seems like Amazon stands to benefit more than Target.

Braintrust
"This is the new world where retail brands are built from consumer-driven preferences for what to buy, how and when to buy it."