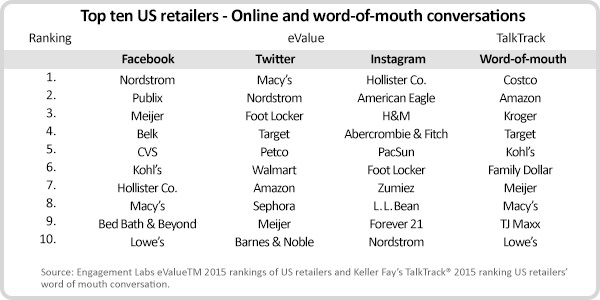 A new study finds that retailers that have been successful at generating attention on social media aren’t necessarily translating it to word-of-mouth (WOM) attention offline.

Costco, Amazon and Kroger held the top spots for offline WOM sentiment, according to Engagement Labs’ TalkTrack Word of Mouth rankings for offline conversations in the months leading up to the holiday season. But none of those retailers ranked among the leaders when measuring WOM conversations across Facebook, Twitter and Instagram over the same time period.

Instead, the leaders in "Total Social" data rankings were apparel and footwear retailers such as Nordstrom, Macy’s and Kohl’s, with a number of teen apparel chains ranking high on Instagram.

Bryan Segal, CEO at Engagement Labs, said many of the department store and apparel brands are being helped by social media’s focus on visuals, while Costco, Amazon and Kroger benefit by having a "wide-range of products that are driving conversations."

Added Mr. Segal, "Knowing how a brand is performing both online via social media and how fans are discussing your brand offline, helps brands gain a better understanding of areas for improvement so they can work to grow their followings, drive greater amount of conversations and ultimately drive sales through the holiday season."

Among the findings around social media:

In what ways is online WOM different than offline WOM? Do you see ways for retailers or brands to better link the two?

Please practice The RetailWire Golden Rule when submitting your comments.
Braintrust
"Generational differences contribute to who’s using what medium to share thoughts/opinions. The fact that teen apparel chains dominated Instagram rankings is no surprise, nor that Costco, Amazon and Kroger held the top spots for offline W-O-M sentiment."

"We have a pretty good size Facebook following, and in the supermarket business, a like on FB doesn’t translate to an actual sale, as many folks love to hit the like button for your work."

There are a couple of potential issues at play. Generational differences contribute to who’s using what medium to share thoughts/opinions. The fact that teen apparel chains dominated Instagram rankings is no surprise, nor that Costco, Amazon and Kroger held the top spots for offline W-O-M sentiment. Those results roughly break along stage of life divisions (possibly excepting Amazon). Additionally, habitual tendencies might be a factor too. Once a teen has posted on Instagram, they may just move their face time to other topics of interest and not dwell on thoughts of shopping.

Linking the two worlds is tough for retailers without attempting some unique promotion that encourages passing info from the digital to the physical realm. Retailers simply cannot force people to say or do anything.

As the article points out, there are many ways to generate word-of-mouth. Anytime retailers can generate positive WOM it’s good, no matter what the channel. What’s equally important is how the same retailers handle negative comments. Nordstrom and Costco shine in customer relations. The takeaway is to get customers talking and, when they do talk, listen and then join the conversation.

The biggest difference is numbers. I can tell a lot more people online through Facebook, Twitter, etc., than I can just sitting around the dinner table with my family. That said, the offline testimonial is a strong one-to-one/person-to-person endorsement that can’t be beat.

Much of the online WOM content is “unstructured.” That is, the content needs to be analyzed in a way that makes it usable, and eventually actionable. That is simple to understand, but not always easy to accomplish. There are new tools in the marketplace that are now capturing WOM content from various sources including social, news, events (sports, etc.), and other lifestyle sources. These tools can now connect both online and offline content to help increase promotional forecasting accuracy and become more agile with all aspects of inventory management.

I think there is another issue in play here. Engagement online is not really engagement beyond a moment or two. Engagement offline is really about a conversation, requiring true engagement. At the end of the day, I believe offline WOM trumps online as far as sales — even if those sales end up happening online.

Offline social interactions require stories. Retailers need to deliver a message that people can share over drinks, dinner or the water cooler conversation. Most people won’t remember enough about a visual to create an interesting enough story for people to share.

This is just a guess, but I think that WOM online is more of a “lonely” pursuit, and doesn’t really connect to action. Whereas WOM in person is more of a social pursuit, of people in groups, having discussions and sharing ideas. Credit to those retailers who are using social media, BUT someone has to figure out if it’s feasible to link the two. Right now it’s sort of like an ad that everyone thinks is terribly entertaining, but then you can’t remember who the advertiser was.

Online WOM is more lip service than actual consumers flocking to the store and making a purchase. We have a pretty good size Facebook following, and in the supermarket business, a like on FB doesn’t translate to an actual sale, as many folks love to hit the like button for your work, and unless the deal is incredible, they will go about their business and shop wherever they normally do. It is about being consistent with your effort. That will pay off over time, but it has to be the proper product at the killer price, that will get the online consumer off the couch to come and get it, and that hasn’t changed for years. My best WOM by far is offline, where I get customers who tell me when they come in that so and so told me about your store, and loved the experience. This customer will buy more, and you stand a chance of a return visit by the way you treat them. These customers will shop the entire store rather… Read more »
0
|
0
-   Share

A key point in the findings is that brands who have quick response times and active engagement with customers online had higher scores. This continues to emphasize the point, that it’s imperative to have valuable interactions with customers. Customers oftentimes aren’t judging a brand by the final solution they provide to their problem, but judge them on whether they responded quickly and seemed to care. Acknowledgement of an issue and showing a willingness to help will be a determining factor this holiday season and beyond in consumer purchases.

1. Functional, or supplying information
2. Social, or expressing uniqueness and belonging
3. Emotional, or releasing feelings by bragging or venting

Offline WOM is usually one on one. It is intimate by nature and allows people to share emotions. Online WOM mostly involves “broadcasting” to many people and is a part of social signaling.

Braintrust
"Generational differences contribute to who’s using what medium to share thoughts/opinions. The fact that teen apparel chains dominated Instagram rankings is no surprise, nor that Costco, Amazon and Kroger held the top spots for offline W-O-M sentiment."

"We have a pretty good size Facebook following, and in the supermarket business, a like on FB doesn’t translate to an actual sale, as many folks love to hit the like button for your work."