Will Amazon become the Amazon of weed if Congress legalizes it? 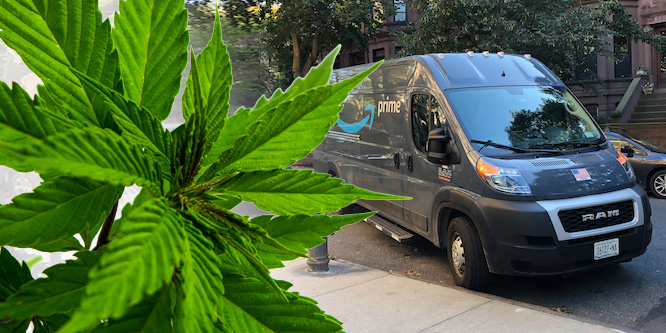 Amazon.com stated earlier this week that it supports the Marijuana Opportunity Reinvestment and Expungement Act (MORE Act), proposed legislation that would make the sale and consumption of cannabis products legal across the country. The House of Representatives passed the MORE Act last year but it went nowhere in the Senate where it did not have the requisite 60 votes to pass.

Amazon’s statement included a change in personnel policy that would end the pre-employment testing for the drug for certain positions. The company has decided that it will treat cannabis in the same manner it does alcohol when it comes to its testing procedures.

While the news is significant based on the retailing and technology giant’s economic clout and its role as an employer, it may be causing ripples within the cannabis industry for other reasons.

An article on Leafly asks whether Amazon will be “eating the cannabis industry’s lunch” should the day come when marijuana becomes legal across the U.S. and territories including Puerto Rico and the Virgin Islands. While not the subject of this particular piece, perhaps the same question could be asked of a wide range of large retail chains — convenience, club, dollar, drug and grocery — already selling over-the-counter medicines and alcoholic beverages.

The Leafly article offers some consolation to current operators of marijuana dispensaries across the U.S. “When people think of Amazon crushing an industry, they commonly think of Uncle Jeff putting America’s bookstores out of business. But bookstores are the wrong analogy. … The more appropriate analogy is booze. The alcohol industry experienced these same fears four years ago” following Amazon’s acquisition of Whole Foods.

That deal did open up the sale of alcohol for Amazon, but it is far from being a juggernaut, having to deal with the complexities of retailing in a category that is regulated by a variety of separate and distinct state and local regulations.

The prospect of marijuana becoming fully legal has seemingly improved with each state ballot measure or legislative act passed in recent years. There are more states that have legalized the drug for either medicinal or recreational use than there are those where possession under any circumstance remains a crime, Rolling Stone reports.

If and when the day comes when cannabis is finally legalized, will Amazon and others flood in?

DISCUSSION QUESTIONS: Why do you think mainstream chains that sell alcohol have yet to move into the legal weed business in states where it has been approved for recreational use? What national or regional retailers, if any, would you expect to go full bore into cannabis if the MORE Act or something similar were to be passed?

Please practice The RetailWire Golden Rule when submitting your comments.
Braintrust
" If legal on a national basis, then absolutely I would expect major retailers to jump into this business. It’s immensely profitable!"

"If there were a “Wild Wild West” of retail, I believe the move into retail cannabis is it. And it’s just a matter of time before bigger retailers get more involved."

"...in the absence of federal legality, it is very hard for larger companies with national operations to enter the segment."

15 Comments on "Will Amazon become the Amazon of weed if Congress legalizes it?"

The cannabis CPG segment is made up of a lot of smaller, innovative companies. One of the reasons for this is because, in the absence of federal legality, it is very hard for larger companies with national operations to enter the segment. Distribution across state lines, for example, is problematic as the federal government regulates interstate commerce. Banking, which is also federally regulated, can also be challenging. As soon as cannabis is legalized at the federal level, it will almost certainly give rise to larger companies exerting the segment in a more serious way. I don’t think this will destroy all smaller companies, but it will make the category more crowded.

It is going to be all about the rules, both nationally and locally. With alcohol it seems every state has different rules. Some don’t even allow mail order. The greater the variation in the rules, the less likely Amazon will be a juggernaut in pot.

However if the rules are consistent (or should I say non-existent) there will be no better place to place my order.

While marijuana is legal in certain states, it’s not legal on a federal basis and therefore the banks won’t deal with the income that is yielded from its sale. So large retailers can’t or won’t deal with that. If legal on a national basis, then absolutely I would expect major retailers to jump into this business. It’s immensely profitable!

We need approval at a federal level for retailers to commit to sales of cannabis. Without that, things will more likely remain at a local level. Federal legalization unlocks interstate transportation capabilities and brings scale opportunities which are critical for larger retailers to jump into this business. Convenience store and grocery operators largely already have processes in place for age-restricted product sales, so they seem the most likely candidates to initially sell cannabis products. This also includes food and beverage infused products which will likely proliferate upon federal legalization.

Is there no end to the tentacles of this all-consuming company? Seriously. The U.S. House of Representatives said Amazon, Apple, Facebook and Google had exercised and abused their monopoly power and called for the most sweeping changes to antitrust laws in half a century. The 449-page report said the four companies had turned from “scrappy” start-ups into “the kinds of monopolies we last saw in the era of oil barons and railroad tycoons.” It’s time to break Amazon up.

If there were a “Wild Wild West” of retail, I believe the move into retail cannabis is it. And it’s just a matter of time before bigger retailers get more involved. Let’s put it into the words of the famous philosopher Han Solo from Star Wars: Sit back Chewie! We’re going into hyperspace!

Until it is legalized on a national level, it will remain a complex business to maneuver due to differences in state laws.

The Bev Al business has dealt with these state laws in alcohol forever and continues to do so. They will be best positioned to handle this. They have the relationships with retailers, distributors, etc.

I believe Amazon should be prevented from getting into this business. Having Amazon control everything will not be a good thing.

Yet times are changing.

Without getting too deep into the weeds, where there is smoke there’s fire (sorry). Today, major chains are playing a waiting game and working out the impact of THC on their businesses (probably good) and brands (TBD). Full Federal legalization legislation will certainly start a “Green Rush”, but who participates remains to be seen. Will Amazon, for example, want to risk 12-year-old Janes and Johns using their parents’ Prime account to get eight miles high? What about liability in the case of car accidents blamed on an overindulgence in Jeff’s Juicy Joints? If those legal hurdles are cleared I think it’s safe to say the big guys – retailers, alcohol producers/distributors, and tobacco companies – will battle for the mass market. On the other side we will also likely see an artisanal growers’ market similar to the craft beer movement.

It will be interesting to see if brand or type also becomes the standard for what is actually purchased. Perhaps it will be some other factor altogether. Do brands associated with Bob Marley, Willie Nelson, Snoop Dogg, Jay-Z, Tommy Chong, et al, or something else become the standard for the business? If so, consumer-direct models exclusive to a brand could take off. Strains including Acapulco Gold, Maui Waui (Wowie) and Panama Red were big finds way back in ancient times when possession of the killer weed could result in an unplanned visit to a police station. Cannabis today is being used for what ails you with strains high in CBD and low in THC offering almost no buzz but, reportedly, having medical benefits such as reducing anxiety. Access to high quality product (look ma, no seeds) is common in today’s legal market. Perhaps, Seth Godin’s position that every product made today is okay and that’s good enough. The price of cannabis could definitely affect whether the category is a trade up or down business as… Read more »
0
|
0
-   Share

Either Seth never scored any bad weed or, when it comes to drugs at least, you shouldn’t trust a guy who insists Hush Puppies were ever hip.

Regulation at a national level completely changes the weed game, which is currently played by small innovators. I expect national organizations to jump in when the regulation patchwork becomes simpler. Companies like Constellation Brands are already investing in cannabis operations and will be ready.

Caution is demanded with this idea. The truth about legalized weed is that prices and margins drop dramatically once it is legalized and becomes a true market.

Yes, Amazon may roll its own business in this market, but they’ll also continue to struggle to find profits with weed as there is NOT infinite demand nor infinite margin in the business. Just look at the details of the established weed markets like Oregon, Washington, and Colorado.

Braintrust
" If legal on a national basis, then absolutely I would expect major retailers to jump into this business. It’s immensely profitable!"

"If there were a “Wild Wild West” of retail, I believe the move into retail cannabis is it. And it’s just a matter of time before bigger retailers get more involved."

"...in the absence of federal legality, it is very hard for larger companies with national operations to enter the segment."