Will an AR try-on app cut down on online clothing returns? 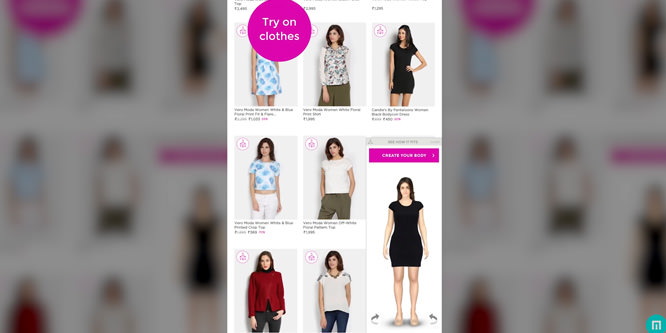 Part of the reason returns have become such a significant part of the online apparel shopping experience is because there’s no great way to get a feel for how clothing fits without first trying it on. But an augmented reality solution that’s been gaining popularity abroad has gotten some funding, and made some partnerships, that might make it easier for U.S. shoppers to make the right choice the first time around.

The Metail app allows users to virtually try on clothing by superimposing digitized versions of garments onto a virtual “body” within the app, according to Business Insider. The 3-D modeled version of the clothing is created taking into account features such as fabric texture while the simulated body created in the app factors in size and weight. The U.K.-based startup received a round of funding led by TAL, a Hong Kong-based apparel manufacturer that purports to make one in every six dress shirts sold in the U.S. Metail hopes to use this as the foundation for a U.S. expansion.

Returns have become a costly problem throughout the e-commerce world, as explored in a Financial Times article. In the U.K., returns cost retailers 60 billion pounds ($77 billion) yearly. In apparel, there’s the added concern of customers treating the ability to return clothing as merely a part of shopping. Iain Prince, supply chain director at KPMG, told Financial Times that almost a fifth of online fashion purchases include items with similar characteristics. This would indicate that customers intentionally over-order, try everything on and send back what doesn’t meet their needs.

In part, the extreme ease of returns Amazon.com offers may be creating an expectation by consumers that other retailers simply can’t afford to match. Amazon has made no-questions-asked returns (and sometimes even replacements for products with no need to return the original) an expected part of the e-commerce experience.

Metail is built specifically to allow users to try on many items in a short period of time, Business Insider reported. But the question remains if even highly-convenient AR experiences can discourage the order/try-on/return model.

DISCUSSION QUESTIONS: Do you see Metail and similar apps putting a dent in returns of apparel items purchased online? What will determine if such apps become popular among clothing shoppers?

Please practice The RetailWire Golden Rule when submitting your comments.
Braintrust
"While AR may help, it is unlikely to eliminate the problem. An alternative could be to incentivize the customer not to return."

18 Comments on "Will an AR try-on app cut down on online clothing returns?"

Metail and other apps may cut down on returns, but any product that consumers wear will always be subject to higher return rates. With Amazon willing to facilitate returns, other retailers will have to follow suit or potentially lose customers.

Unfortunately, returns are deeply entrenched in the customer psyche. While AR may help, it is unlikely to eliminate the problem because buying extra product and returning it costs the customer absolutely nothing. With AR, there is likely to be a trust gap for some time during which customers continue their current behavior because they aren’t sure how accurate the portrayal is. An alternative could be to incentivize the customer not to return. For example, if the same item in different sizes is added to a cart, an app that automatically prompts the customer to receive a 15 percent discount if he or she orders only one item could be a better way to get at the problem.

I’ve always loved the promise of this technology, but until manufacturing operates at a higher level of precision than is standard today, people will always be returning clothes purchased online. The fact remains that fit can vary from one run to the next even within a particular SKU, so no matter how good you make the tech, the physical realities get in the way.

You’ve touched on an important point, Stefan. Fit varies so widely especially with women’s clothes. What some retailers like Boden do is offer the best recommendation based on your size in popular clothing lines. It’s not a perfect science but it does help. Will AR eliminate returns? That seems like an impossible goal to put on this tech. Test and see seems like a more reasonable approach. These companies may find other useful data points that inform manufacturing and make. Adoption of the tech among consumers will ride on how easy and accurate it is to use. What kind of full body picture will the consumer need to upload? How safe is that picture? With privacy concerns, older consumers may hesitate to share these images. And the proof is in the pudding. If it looks good on the app, how likely is it to look good in real life?

There is a subjective aspect to fit/look that no app can ever fully master. In time, with better modeling (drape/movement and avatar motion), AI that learns what matters and what appeals to each consumer on a person-by-person basis, and even haptic feel (needs an enabled device) AR will become very valuable to shoppers, brands, and merchants. Until then, each app moves the needle forward a tad and returns may reduce slightly, but for a very long time, over-buying and returns are just part of the landscape.

We’ve been having this discussion for years and we’ll continue to have it, because sizes aren’t in any way predictable. AR isn’t going to change the way a garment fits. Online apparel sales are going to generate a lot of returns until we can figure out how to convey what size an item is beyond vague terms like “medium.”

I think a lot depends on how accurate the technology is. There is also a trust factor. Will shoppers trust the AR representation? Probably not. Returns have become a part of the online shopping experience. It’s going to be hard for retailers to change consumer behavior, especially if consumers don’t want to change.

The app needs to really reflect the consumer’s body and show a true representation of how different sizes and styles look on that body to have any impact on decreasing returns. Then the quality of the material and workmanship needs to be at least as expected.

Apparel shopping and returns are inseparable. They are an inherent part of the shopping journey and experience. While these apps may put a dent (more like a scratch) in apparel returns the usage of these apps will be so small that the measurable results will be extremely small. While proper fit is a big factor in returns there is an intangible factor that no app will ever address. How do I feel, look, behave, etc., in this outfit? All these very personal feelings and emotions are unique and dynamic. They will never be “solved” by an app.

Have you ever said, “It fits, it just doesn’t feel right?” No app can beat the try on.

I love the Metail concept and I think it’s a practical application for this type of tech. I don’t think returns are ever going to go away — there will always be items that don’t fit or look or feel the way a customer expects — but I think any steps that can be taken to help customers make better choices when shopping online can help reduce the issue. As tech keeps getting better and better so applications like Metail will as well. In order to make a difference, though, the tech needs to be widespread and used by a lot of retailers. Once customers have used it and found that their real life experience in terms of fit, etc., matches the virtual one they will have most trust in the tech and hopefully that will reduce overbuying.

I think that as the technologies improve, this will be a huge help to both the merchants and the shoppers. A great section of the All About Fashion website allows you to “try on” the clothing in a similar way to the article’s description. Great stuff!

Fit is subjective to the individual. Body shape and weight have nothing to do with how someone likes their clothes to fit, look and feel on their body. Your “tight fit” is different than my “tight fit.” In my career, setting up fit and shape standards for large brands and retailers, I have found that people shop for clothing based on individual emotional and sensory needs of fit, look and feel. Personal fit is not about knowing the measurements of the individual customer nor the measurements of the garment itself. A woman may not be able to button “a tailored jacket, but that does not mean it doesn’t fit her personal preferences of fit, look and feel. Most apparel returns are due to Sensory Preference issues. Did not like the fabric, did not like how it fit, etc. All of us WANT to buy clothes that make us look good and feel good. The inter-relationship between brand fit, shape, sizing and ease allowances result in a multitude of sensory outcomes in a garment. Missing in… Read more »
1
|
0
-   Share

I think it will help, but I don’t see it making a significant dent. Just because the app exists doesn’t mean customers will take the time to use it. However, for those that do, it will bring an extra level of fun and personalization to the online shopping experience which is valuable for retailers. Retailers need to include this option front and center on their website and in their communications to customers to create more visibility and help tackle this problem of returns.

A dent, yes, but only to the extent that the clothing is consistently made to the same size. And of course it will do little/nothing about people who are buy/wear/returning things … how many of these there are, we can only hope is small.

I see this as the future of online apparel sales. Returns run between 25% to 35% of the total sale volume and this is an unsustainable model if you look at the fact that 85%+ of sales take place in a store today. As the numbers shift to higher online sales percentages, it is imperative to cut down on returns and math is the best way to do that — and by that I mean the algorithmic modeled solutions can definitely improve these numbers.

While apps and technology like Metail may help reduce returns in some cases, there is a difference between how apparel look vs. how it feels when you try it on. Tech like Metail can help with how it looks, but I don’t see it solving the how it feels problem and reducing returns from that problem. Many consumers have already trained themselves to overbuy apparel in multiple sizes knowing full well they will return excess merchandise. As we all know, it’s much harder to “untrain” consumers than it is to train them to a certain behavior.

Does anyone think that there might be an easier alternative to solving the online returns nuisance? It sounds like AR is a great option but it’s not widely adopted by consumers yet. It could still be a couple of years before consumers trust trying on their clothes through AR. There has to be an easier solution.

Braintrust
"While AR may help, it is unlikely to eliminate the problem. An alternative could be to incentivize the customer not to return."