Will consumers spend $370 for a Coke? 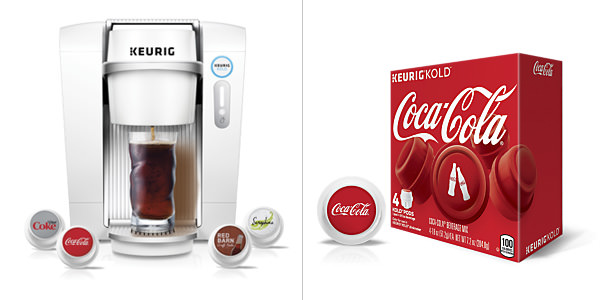 Keurig has helped change the way millions of consumers drink coffee with its single drink system. Having succeeded at hot beverages, it has long been rumored that the company would create a new machine to do the same for cold drinks. Now, the long awaited Keurig Kold machine is finally here, but at a price tag that may result in sticker shock for many.

The new Kold machine has a suggested everyday retail price of $369. The ingredient pods (AKA K-cups) needed to make an eight-ounce glass of soft drink such as Coke will cost $1 each. The new system will also make Dr. Pepper and Canada Dry beverages along with a list of private label drinks.

Coca-Cola, which has a 16 percent stake in Keurig, is counting on the new system, which is said to produce a beverage similar to a fountain drink, as a means to grow sales of its broad brand portfolio.

How many will be willing to drop $370 for their first eight-ounce glass of soda remains an open question — warm two-liter bottles and 20-oz. cold drinks sell for under $2 in retail stores. Analysts believe price will become less of an issue over time as retailers inevitably discount to turn inventory and Keurig lowers the price as it ramps up production to meet increased demand.

Brian Kelley, president and CEO of Keurig, doesn’t believe price will be an issue for the new machine and fully expects Keurig Kold to change the way consumers get their cold beverages.

"There are a lot of things consumers will pay $299 dollars for and we think this is one of them," Mr. Kelley told The Boston Globe. "We’ve literally brought a bottling plant into your home in a size that fits on your counter."

Do you expect Keurig Kold be a hit or miss with American consumers? How might the addition of Keurig Kold affect the way food, drug, mass and other channels manage their cold beverage businesses?

Please practice The RetailWire Golden Rule when submitting your comments.
Braintrust
"I think not. For the foreseeable future I believe most retailers will add the pods and wait and see. Those high discount two liter Cokes and Big Gulps aren’t going anywhere yet."

"Miss. I do not see a significant convenience benefit which outweighs any potential fountain drink options. Coke has done a terrific job of giving consumers a myriad of flavor options at retail, either in its new dispensers or in the cold case."

For home use, no thanks. As a soda connoisseur, I agree that fountain soda tastes better, but it’s not worth the expense of the machine, the cost of the pods, the effort to “brew” a soda, and the probability that the machine needs to be maintained and cleaned. Better to just hop on down to the ubiquitous 7-11 and get a 32 oz. soda for $1.05. Where I do see potential is in small offices or waiting rooms as a perk for customers and associates.

Keurig Kold will be a minor hit with hipsters, conspicuous consumers, perhaps even the mindlessly affluent office or break room or two … but … at $370 it isn’t ready for prime time.

Carbonated sugar drinks are on their way to becoming an endangered species as it is. Is the answer to create an expensive machine that gives a pseudo-fountain experience and yields a petite gulp for $1 after you’ve invested almost $400 in a machine? I think not.

For the foreseeable future I believe most retailers will add the pods and wait and see. Those high discount two liter Cokes and Big Gulps aren’t going anywhere yet.

I’m not a soda drinker so my personal answer on purchase intent is no way. I do agree with Al that potential for commercial application in offices and waiting rooms is high. That said, I hope I don’t run into this at any doctor’s office, given that sugar overload is part of the cause of so many diseases.

I will give kudos to Keurig for innovation. Changing the way consumers have access to an iconic brand like Coca-Cola is a big deal for generations to come.

Sodastream, the competitor to this technology, has made a pretty big splash in Europe. But they never got real traction in the U.S. Their technology uses a refilled home carbonation dispenser (think refilling the propane tank for your grill) that yields the profits. It is more of a HP “printer and ink” economic model than Keurig’s offering.

My assessment is that Coke is in this to head off Sodastream (generic sodas only) and others here in the U.S. with “the real thing”. Even if it is too expensive to be broadly appealing, it may serve its strategic purpose very well.

This will be a unique conversation piece for now. With a much lower price and greater variety of pods, it may eventually become a mass consumer product. However, unless the results exactly match the taste of the product sold in bottles and cans, a better approach might be to offer unique flavors. Wait — there are less expensive products on the market doing that.

Miss. Today when you need a hot beverage like coffee, tea, etc., you need to heat water and use a carafe or Keurig type of option. Keurig offers the convenience of removing the water temperature preparation step. This not the same for refrigerated cold beverages. I do not see a significant convenience benefit which outweighs any potential fountain drink options. Coke has done a terrific job of giving consumers a myriad of flavor options at retail, either in its new dispensers or in the cold case.

Keurig should be focusing its efforts on every potential hot option including its Campbell Soup partnership.

Roll back the clock 10 years or so and if asked the same question about coffee what would your thoughts be? Success or failure? Of that “brew a cup mentality in a brew a pot world.” Predicting behavior of shoppers using rear-view thinking only supports the status quo. Big bet on a big market with a big idea. Gutsy, bold and if the product delivers it should be fun to watch.

The death of sugar we love to talk about, but we still do pretty well as an American culture. Just not sure doctors’ offices are target distribution points. Good luck.

Coffee, yes. Soda, no. Some restaurant chains have a variation of this type soda dispenser and it works—there. But in a home environment, I doubt it will create a “fizz.” I am a visualizer. But I can’t make this happen in my weird mind.

One more thing: do NOT try to take my can of Coke away!

Key question so far unanswered: Will Kold users need to refill the device with water from the tap or can it be connected directly to a water supply like my refrigerator ice-maker?

Another key question: What is the chemical composition of the Karbonator beads Keurig says are embedded inside each drink pod? Who certifies their safety for human consumption? The posted video doesn’t explain enough about this.

I should say I like my Keurig coffee maker very much – enough to overcome any price resistance and my guilt about the packaging waste it creates.

I don’t mind washing my coffee mug each morning, but on those rare occasions when I drink something fizzy, it’s pretty convenient to drink from a bottle and leave the glass in the cabinet.

I don’t see a gain in overall convenience that would overcome the cost-per serving. On balance, this new product innovation leaves me Kold.

Oh—and another thing. One of the unavoidable factors of the soft drink business is the high cost of shipping water to hundreds of thousands of retail locations. Soda bottles and cans weigh a lot and they take up lots of space in stores when full and in landfills when empty. Very bad equation for online shopping and delivery. Maybe Keurig Kold pods are a kind of answer for this particular challenge. Pods will definitely be easier to ship. Will they create less landfill waste than a soda can or PVC bottle?

This will be a miss for many customers, since the initial cost is so large and the current model for purchasing cans or bottles of soda (we pay about $.40 each can) is so small, that families will not make the jump. Keurig keeps forgetting that families of children will not offset the $1 per K cup, along with the device cost and the controls needed to be in place to making the product, compared to simply pulling a can out of the refrigerator for less than half this price? I think this is a model doomed to fail.

The soft drink market is different than the coffee market. At one time, General Foods and P&G owned the coffee market. Along came Starbucks and market structure changed. Keurig has been successful almost giving away the coffee maker and profiting on the coffee. Soda Stream has been offering carbonate beverages for a few years. They seem to be moving into flavored water which is the greatest competition to Coke and Pepsi.

I think Keurig Kold will not be overly successful. It is late to the party and very pricy. Retailers will need to reduce their beverage selection to make room for stocking pods.

What burning need does this system fill? I still have to plan for, purchase and stock the pantry with flavors I might want to try, then prep the machine and wait for it to dispense. Today, I just reach for a can or bottle of my favorite beverage, pop it open and refreshment is a chug away. With the Keurig system, we just quadrupled our weekly food budget layout for at-home consumed beverages. Probably won’t be a Keurig Kold system in our house anytime soon.

Worse, dissecting ingredients will damage Coke and Pepsi’s brand. They will work diligently to undermine any success.

Braintrust
"I think not. For the foreseeable future I believe most retailers will add the pods and wait and see. Those high discount two liter Cokes and Big Gulps aren’t going anywhere yet."

"Miss. I do not see a significant convenience benefit which outweighs any potential fountain drink options. Coke has done a terrific job of giving consumers a myriad of flavor options at retail, either in its new dispensers or in the cold case."