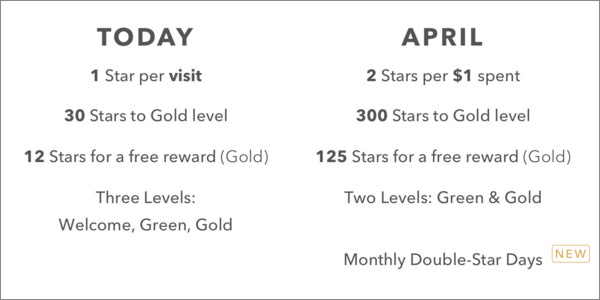 Starbucks is making a change to how it doles out rewards for its loyalty program. Instead of issuing a star for every visit, the coffee giant will now reward its card members with two stars for every dollar spent at locations in the U.S., Canada and Puerto Rico.

The new program, which will begin in April, will provide a free drink or food reward for Gold members who earn 125 stars. (It will now take 300 stars to earn Gold status versus 30 visits before.)

Because the average customer spends a little over $5 when they visit Starbucks, they would need to make about 12-and-a-half trips to earn a freebie. It could turn out to be fewer trips if they visit a Starbucks on new monthly double-star days.

While “My Starbucks Rewards” has been credited with helping to grow the chain’s business, the goal of the new program, which will be simply called “Starbucks Rewards,” is to increase the number of members.

According to The Seattle Times, the 11 million members of “My Starbucks Rewards” currently spend about three times more with the chain than non-members. Fewer than one-in-six visitors to its shops in the U.S. are members of the Starbucks program.

In a company blog post, Aimee Johnson, senior vice president, customer relationship management at Starbucks, wrote that the change to dollar-based rewards was the number one request the company received from its customers.

Ms. Johnson promised that the announced changes to Starbucks’ loyalty program are “just the beginning” and the company would share “updates and ideas on how we plan to make our rewards program even more rewarding for all members in the near future.”

DISCUSSION QUESTIONS: Will the changes in how Starbucks rewards its customers lead to an increase in its loyalty program membership numbers? What do you see as the pros and cons of the “Starbucks Rewards” program?

Please practice The RetailWire Golden Rule when submitting your comments.
Braintrust
"The real question is, can this change provide incremental store traffic? Maybe not by itself, but I expect the average spend per visit will nudge up higher."

"The risk is that the existing customers (who have already been well-engaged with the program) feel like the value is being eroded in which case it will hurt Starbucks."

"The bigger question for Starbucks is how to manage all the negative blowback from its existing rewards members."

For the average existing customer it probably makes some difference, as Starbucks has added some excitement around the program and has recognized that how much you spend is different from just showing up.

For the heavy Starbucks users, this will create a lot of caffeine buzz with a more interesting and rewarding loyalty program.

The real question is, can this change provide incremental store traffic? Maybe not by itself, but I expect the average spend per visit will nudge up higher.

Growth in Starbucks Rewards seemed to have stalled. This could rejuvenate the program, since consumers prefer programs that provide free rewards at low levels of participation. With the change in the rewards structure, look for Starbucks to push membership in the program. Many more Starbucks customers currently do not participate than those who do.

The change was a necessary risk. It fixes a misalignment where the rewards weren’t well aligned to desired behaviors, i.e., giving a star per transaction incentivized smaller purchases (in many cases getting star-seeking customers to break up a large order into several small ones). Now the program incentivizes total spend, which makes much more sense.

The risk is that the existing customers (who have already been well-engaged with the program) feel like the value is being eroded in which case it will hurt Starbucks.

It may be a mistake to have called the old point system AND the new point system STARS vs. coming up with some new point currency, because it “feels” like a major devaluation … “I used to need 12 stars, now I need 125!”

The bigger question for Starbucks is how to manage all the negative blowback from its existing rewards members. The initial reaction since the changes were announced yesterday is disappointment from current members about the higher thresholds for earning rewards.

The structure of the new program seems eminently fair, with customers being rewarded for dollars spent as opposed to visits. The airlines are now adopting this model as well, so it’s consistent with directions in the larger loyalty industry.

These changes may make Starbucks’ program more attractive to a few non-members who see an opportunity to earn rewards consistent with their spending. But it’s hard to see how it will attract significant numbers of new users. The biggest benefit for Starbucks is probably lower costs for its loyalty program associated with higher thresholds for rewards.

I think that there will be whining about the rewards change from customers just because everybody whines about everything these days. But people are so addicted to their favorite Starbucks beverage that this will not affect sales in the slightest or rewards membership in the slightest. Starbucks just holds on to a bit more revenue.

My guess is that it won’t work.

Because the customers who currently are loyal will remain loyal and those that a. don’t like the coffee; b. don’t like the idea of a hipster coffee chain; c. don’t like Howard Schultz’s politics; d. think there is insufficient value for cost; e. won’t see the benefit of spending $62.50 to get a “free” reward, etc.

I go to Starbucks every day, often several times a day. But when I run the math on this deal, it doesn’t seem all that attractive.

The objective to “increase the number of members” is a good one only if it is bringing new shoppers into the store or expanding dollar ring. The only way I see this change increasing the “number of members” is if it converts current loyals to join the club. A heavy spender may now feel motivated to join to reap the rewards that will accrue sooner than under the old structure. But then you are just subsidizing your loyals who were largely content. Will some spend more each visit? Occasional/light/non-customers will now be LESS motivated to join, so this won’t be a significant source of new members. These buyers likely skew toward drip coffee which costs $2 to $3, now requiring 40 to 60 visits to earn a free cup, considerably more than the old 12. Will competitive retailers’ loyals convert for a program like this? Doesn’t seem likely given the role of coffee shop gestalt in driving the store selection. The changes are still smart, but because they reward ticket ring instead of merely store… Read more »
0
|
0
-   Share

Given that many people are now comfortable getting food from Starbucks (especially if you drive long distance), it could be a great deal for their loyal customers. It’s really going to work out for me as when in an airport, there’s usually no one else I trust enough to buy food from. And I’m sure I’m not alone judging from the lines.

Of course, it all depends on how they explain it, but it’s easy to tell that bucks vs hits, if you go there often, will favor the big spenders vs coffee-only folks. Good move (again).

I don’t necessarily see it as increasing the number of people who join the Starbucks Rewards program, but it’s a nice perk for those who spend more than average in a visit.

Braintrust
"The real question is, can this change provide incremental store traffic? Maybe not by itself, but I expect the average spend per visit will nudge up higher."

"The risk is that the existing customers (who have already been well-engaged with the program) feel like the value is being eroded in which case it will hurt Starbucks."

"The bigger question for Starbucks is how to manage all the negative blowback from its existing rewards members."