Will Fanatics and Walmart deal be a grand slam for both retailers? 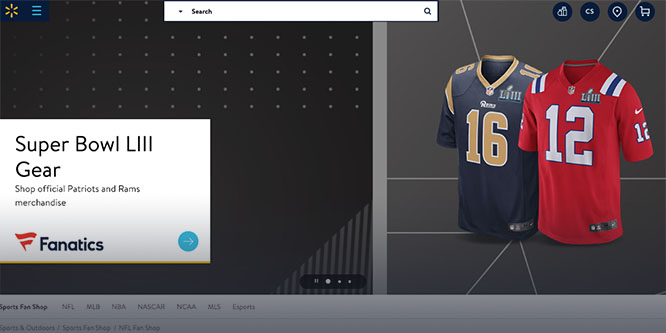 On Tuesday, Walmart significantly expanded its online offerings of sports-licensed merchandise by creating a “Fan Shop by Fanatics” marketplace on Walmart.com.

The 10-year deal with Fanatics, the dominant player in fan merchandise, seems structured similar to last year’s creation of a Lord & Taylor marketplace that brought Tommy Bahama, Vince Camuto and other department store brands to Walmart.com. But, Fanatics secures exclusive rights to sports-licensed merchandise across the site.

At the NRF Big Show, Michael Rubin, Fanatics’ founder, hinted that the company would soon announce such a deal and said any online marketplace would benefit from its ample inventory.

Fanatics not only has access to premium jerseys from Nike and others, but in recent years has developed in-house manufacturing capabilities to support “hot market” opportunities such as being able to make and deliver “Championship” t-shirts overnight to this coming weekend’s Super Bowl fans.

The deal brings Nike, New Era, Mitchell & Ness and other brands to Walmart.com for the first time. Walmart has been seeking to expand assortments on Walmart.com not only through Lord & Taylor, but numerous digital-first acquisitions including Jet.com, ModCloth, Moosejaw and Bonobos.

In a blog entry, Eric O’Toole, general manager, sports and fitness, Walmart U.S. eCommerce, wrote, “We offer more than 75 million items on Walmart.com. And, as we continue to grow our assortment, we are also focused on adding harder-to-find specialty items. Today’s announcement of our partnership with Fanatics is part of this ongoing commitment.”

The deal brings some risks to brands such as Nike, which tentatively started selling select merchandise on Amazon.com in 2017 and Walmart’s Jet.com website last October.

Dan Neiweem, principal at the consulting firm Avionos, said in a media release that it’s important for sites such as Fanatics to be on Amazon, Google, “and, to some extent even Walmart” because search often starts on marketplaces.

He also said Fanatics’ move highlights the “de-commoditization” trend. He elaborated, “Sports apparel has been historically hard to come by on marketplaces, but Fanatics is realizing that it needs to expand its reach beyond just sport sites like NFL.com and get its products in front of shoppers who are browsing for merchandise on more general retail sites.”

DISCUSSION QUESTIONS: Do you see the Fanatics’ partnership with Walmart as a win-win for both retailers? What will the deal mean for Walmart’s rivals?

Please practice The RetailWire Golden Rule when submitting your comments.
Braintrust
"This match is certainly a win-win for Walmart and Fanatics. I'm going shopping for my Gordie Howe #9 Jersey!"

"Fanatics dominates its space and Walmart brings the scale so it’s truly a win-win."

"Now that there’s no longer a national chain of sporting goods stores, it makes sense for Fanatics to team up with Walmart."

8 Comments on "Will Fanatics and Walmart deal be a grand slam for both retailers?"

Now that there’s no longer a national chain of sporting goods stores, it makes sense for Fanatics to team up with Walmart. What a great opportunity to create exclusivity and buzz, and create loyalty with a new generation of sports fans.

Definitely a win for both retailers. (Disclosure: Jack Boyle, Fanatics’ co-president for omnichannel, is a former Kohl’s colleague.) It offers a huge volume platform for Fanatics’ assortment of team sports apparel, and it provides Walmart with an expert in the field instead of trying to reinvent the wheel.

Other online retailers will need to figure out how to supplement their branded activewear business with the kind of expertise in team sports that Fanatics now brings to Walmart.

On the surface, this looks like a good deal for both sides. Fanatics gets some powerful retail exposure. Walmart gets to expand their sports merchandise with a high quality recognized brand. If the numbers work for both sides, it’s a winner!

Overall, good strategy. Everyone knows that team merchandise does not come cheap so this is an opportunity for Walmart to sell higher-end merchandise and a huge opportunity for Fanatics to extend their reach. I just hope that the partnership is leveraging the Walmart policies for returns and exchanges as my experience with Fanatics has been beyond frustrating. They made it so difficult to return or exchange an item (this was a gift) that I just gave up.

This is a slam dunk, home run, hat trick for two (note as a Saints fan I’m not mentioning the other “big league”). Fanatics dominates its space and Walmart brings the scale so it’s truly a win-win. Nike just won MLB uniform rights and Fanatics gets the retail piece so Michael Rubin (no relation, unfortunately) is continuing to have a James Harden hot hand.

Fanatics is making a smart distribution move to offer consumer the authentic merchandise they crave. Sports apparel is not a cheap and cheerful knock off business for the millions of true fans! This match is certainly a win-win for Walmart and Fanatics.

The Fanatics partnership with Walmart will certainly benefit both companies. For Walmart, it increases the traffic on and brand image of the Walmart.com marketplace. As Walmart adds more leading brands to the marketplace, more consumers will think of it as a first place to do product searches, which Amazon currently dominates.

For Fanatics, which does not partner with Amazon, it offers exposure to a wider network of consumers that may not have visited a Fanatics’ shopping site. This is another jab at Amazon.

Definitely a win-win. Walmart gets access to a new customer base for new products and Fanatics gets access to the Walmart marketplace. Walmart’s rivals will need to respond to the extent they want access to sports fans for apparel and accessory items. If they do not, Walmart will have a major influence in the sports market. Walmart has made a big move for this market with the dominant player in the fan market.

Braintrust
"This match is certainly a win-win for Walmart and Fanatics. I'm going shopping for my Gordie Howe #9 Jersey!"

"Fanatics dominates its space and Walmart brings the scale so it’s truly a win-win."

"Now that there’s no longer a national chain of sporting goods stores, it makes sense for Fanatics to team up with Walmart."