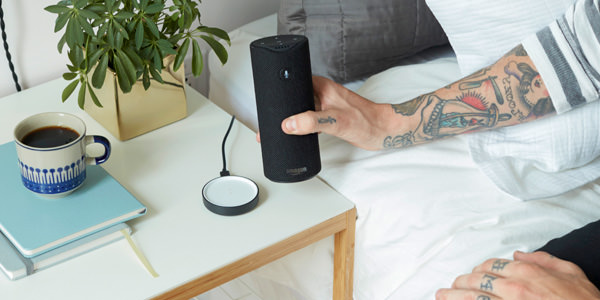 Since the Super Bowl, when Amazon ran a celebrity-packed commercial promoting the Amazon Echo, it has been clear the e-tailer is pushing its voice-automated personal assistant as the tool that every smart home needs. But the voice-activated smart home control center now has competition from another tech giant — and one of the few that has more data on its hands than Amazon.

Google has been working on a device, code-named Chirp, which will integrate voice assistant technology with Google search capabilities, according to an article on Recode. Sources indicate that the device is slated for release later this year.

Google will no doubt face concerns over both security and the use of data gathered in-home, as has Amazon.

The Chirp project is not Google’s first inroad into smart home technology. The company purchased smart home device manufacturer Nest Labs in 2014. In November, it released the Google Asus OnHub smart home router and has also been working on an Internet of Things operating system called Brillo.

But not all of Google’s early investments have paid off. BGR recently reported that Nest Labs is “in shambles” and that Google is unhappy with the lack of new hardware products from Nest.

Amazon, meanwhile, has been working to solidify its lead in the space with new devices. The company has implemented Alexa, the voice assistant that runs on Echo, on devices meant to fit in different places both inside and outside the home. Amazon’s Echo Dot is a shorter version of the tall cylindrical Echo that looks more suited to being a bedside alarm clock (a CNET article describes how to use it as such). The Amazon Tap is a small, portable Alexa-enabled speaker.

Reports over the past few months have placed Echo and its voice-activation technology at the forefront of the smart home market. In March, RetailWire reported that an Argus Insights study called Echo the most discussed smart home ecosystem, with Apple’s HomeKit coming in second.

DISCUSSION QUESTIONS:  Do you see Amazon devices pulling away from the pack to become the preferred control centers in the emerging smart home market? What will it take for Google or others to compete with Amazon in this space?

Please practice The RetailWire Golden Rule when submitting your comments.
Braintrust
"There is so much untapped growth potential for smart devices and the “Internet of Things” that there should be room for more than one player."

"Whoever allows us to forever untether from cable networks will get the $$ from my budget. Meantime, I can live without another gadget that talks."

I wouldn’t bet against either company in this very early-adoption stage. There is so much untapped growth potential for smart devices and the “Internet of Things” that there should be room for more than one player. I believe Amazon has the advantage of being first to market and tied more firmly than Google to the e-commerce potential for the devices. After all, if you’re a Prime member and can ask Echo to deliver something to your house in the same day, what’s not to like?

And one more question: Apple, where are you in this category while your core business continues to stagnate?

As we have seen with many technologies, first to market does not automatically convert to market dominance. What is critical here is not what technologists can get a device to do — whether that is give you the news or turn down the heat — but rather what a technology can deliver that consumers will see as valuable on their terms. Not all functionalities are created equal. And I’m not all that convinced that this is — or will remain — a two-horse race. Controlling the data that passes through a home is a huge prize and there may be more agile competitors waiting out in the weeds, waiting to see when consumer demand peaks. Now, assuming it is a two-horse race for a moment, I’d have to say Amazon looks to be the better bet — at least at this point. Why? Because it has made a concerted effort to “touch” the consumer across multiple product categories and functions. The more touch points, the more likely an information organizing system will be successful. Simple… Read more »
3
|
0
-   Share

The whole is greater than the sum of the parts. The race for the “hub of the home” will not just be about IoT devices, although simplifying the connections and ease of use will be a major factor in determining which devices succeed. The real genius behind Echo currently is the whole ecosystem that comes with it, especially the Prime services, music, etc. It’s not just about the portal, Echo is about the entire experience and the value created for the consumer. Echo is already setting standards for ease of use and value creation that Google’s device must meet and exceed.

Why does there have to be only one winning voice-activated device? Apple and Android co-exist in cellular. And Google’s voice-activated device has not yet hit the marketplace. Amazon has a big lead in this area and has done a masterful job of linking Echo to its e-commerce and entertainment platforms. Voice activation is where computing is heading. We’ve only seen the tip of the iceberg. Expect many more players to enter this space and more than one to thrive.

To reach mass adoption, the winning combination will involve natural interfaces, ease of use and integration into digital lifestyles. They will redefine convenience and value. People may not realize they need these products and services yet, but once they experience them, they’ll wonder how they lived without them.

I don’t believe this is a zero-sum game. While both Alphabet (Google) and Amazon are going head-to-head here, the pie continues to grow and I expect more competitors will enter the fray in unexpected ways. The clear winner will be the consumer!

Coincidentally, I just hosted my monthly tech meetup last night featuring Amazon’s east coast Alexa/Echo evangelist. 🙂 Amazon has a big jump on the market and the device is very well developed at this stage. Microsoft is betting on Cortana on the desktop and Xbox, Apple with Siri on mobile and ultimately desktop, so there’s no surprise that Google will not sit by idly. I can go on and on with other big tech companies looking to jump in as well. I think Amazon has mastered the early lead, but it will NOT be a winner-take-all market. Each device/assistant will get its loyalists and there will be a vast landscape of other artificial assistants, although most will not be device-bound. Lastly, it’s naive and a huge misnomer to call these services (via device) smart-home devices. In their early incarnations, smart-home may be the best space for a nascent public to get their feet wet and gain understanding, but they are indeed a new paradigm and interaction model that absolutely will decimate tired, old and limited… Read more »
1
|
-1
-   Share

Going head-to-head in this area, both companies have strengths and weaknesses. One of the areas that I think Echo has an edge on at this time is that it is also an entertainment device. It will play requested music and more. Currently Nest is about a product line associated with IoT (Internet of Things). The Echo can connect to products within the home, but in the end it is Amazon. That means the opportunity for Echo to help you place orders for just about anything Amazon can sell, if not more, may give them an ultimate edge.

The article mentioned VHS. Yes, VHS won over Sony’s Beta-Max. However, I see iPhone and Android fighting for market share, as does Coke and Pepsi – and any other industry with competition. In the end competition is good. It will force each of these companies (and others jumping in) to keep adding value, more usability, etc.

While I certainly think there is room for more than one or two devices of this type, at this juncture the Echo seems more “sticky” given the integration with entertainment, home automation and especially shopping for anything Amazon carries. But we are early in IoT so continued evolution is the order of the day.

The big retail competitors to Amazon, who also want to reduce their ad spend with Google, are not standing still in this space. Target’s lab in San Francisco is now focused on smart-homes, and Sears is putting its solution in some stores. And the Sprosty Network is running Retail Xcelerator focused on second-stage startups in the smart-home space. That means they have launched products and now need access to the major retail partners that Sprosty has lined up for the program.

I’m in line with Dick Seesel on this one. Where is Apple? Google will be a good competitor but has some catching up to do. Whoever allows us to forever untether from cable networks as part of the package will get the $$ from my budget. Meantime, I can live without another gadget that talks. Regardless of their cute or clever names, they all turn into “gabby” for me.

I suppose there’s a hierarchy for such things: God> Google>Amazon>(practically) everyone else. For me, though, the bigger question is how much of the market this represents ($$ wise). I’m sure it’s a few $B/yr — i.e. enough to make someone wealthy or support a few normal sized companies — but when you’re a company that turns everything less than tens-of-billion$/yr into a rounding error, how important is it?

(As to whether or not this is what the world really needs, I’ll let the market decide.)

It’s too early to tell. It depends what features consumers find more valuable and which company can execute them better. It’s anyone’s game — Amazon just has a head start.

Braintrust
"There is so much untapped growth potential for smart devices and the “Internet of Things” that there should be room for more than one player."

"Whoever allows us to forever untether from cable networks will get the $$ from my budget. Meantime, I can live without another gadget that talks."