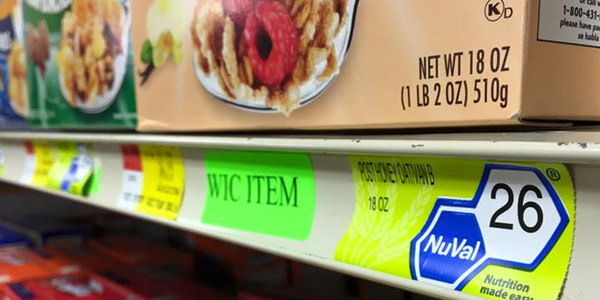 Though the NuVal metric for scoring the healthiness of groceries has existed for some time, it may not have made the impact on the grocery scene that its proponents hoped. Even as the natural food trend continues to explode and consumer habits get more health-conscious, rarely does one see a NuVal number on the shelf. But a grocer in one neighborhood in Syracuse, NY is labeling items with the NuVal number as part of an attempt to get residents in economically disenfranchised areas more focused on health.

Syracuse.com reported that Nojaim Brothers Supermarket is launching the program in conjunction with Syracuse University, St. Joseph’s Hospital and other community agencies to address public health concerns in the impoverished neighborhood that suffers from high rates of obesity, diabetes and other illnesses.

In the article, Rebecca Bostwick of Syracuse University’s Lerner Center for Health Promotion indicated that shoppers will be encouraged to buy foods with a healthier NuVal number, although what incentives will be used is unclear.

NuVal was first launched in 2008, and is based around an algorithm called the Overall Nutritional Quality Index (ONQI). The ONQI takes into consideration the presence of 30 nutrients in a product and their impact on health to generate a ranking number. The NuVal website lists 26 grocers currently using the NuVal metric on their shelves. Many of the grocers are regional chains such as Hy-Vee, United Supermarkets and Cash Wise.

Ms. Bostwick acknowledged in a separate interview with WSYR that the shoppers who frequent the Syracuse grocer have limited means. She indicated that the goal is to encourage shoppers to make small choices within the same price point at which they usually shop.

Store owner Paul Nojaim went through the various Cream of Wheat choices with the WSYR news crew to demonstrate the big impact a small change in product selection can have for a customer. He showed that two varieties of flavored Cream of Wheat had NuVal scores in the twenties, while the plain variety had a NuVal score in the eighties.

Will NuVal or other nutritional rating systems offer a successful means toward helping low-income shoppers make healthier food choices? Will placing nutritional ratings and information on shelves affect shopping behavior in these stores?

Please practice The RetailWire Golden Rule when submitting your comments.
Braintrust
"I predict a trivial effect, and I’d predict the same regardless of the shopper’s income. There’s only a small group of shoppers who are seeking out healthier alternatives — and they probably have a better feel for what is healthier."

"NuVal, if supported by other promotions and social media, can be a viable initiative. It’s in line with calorie disclosure. Of course there’s no guarantee that shoppers will be influenced consistently."

"Shoppers of all income levels have consistently told researchers that they would opt for healthier choices if they were as tasty and priced on par with the no-so-healthy brands. However, in many cases, healthier choices are not value priced."

Probably about as effective as warning labels on cigarettes and alcohol. It appears to be less effective with those with minimal education and lower incomes. It certainly can’t hurt.

We all remember the unit per measure pricing that was going to help people make better purchases. That didn’t produce the intended results of consumer use. I should note that it may have ensured that retailers used a pricing scheme built around package size and per-ounce cost.

This should help people but it is unlikely that those it is designed to help will use it to the extent hoped for.

I predict a trivial effect, and I’d predict the same regardless of the shopper’s income. There’s only a small group of shoppers who are seeking out healthier alternatives — and they probably have a better feel for what is healthier. The example used misses the point — the flavored Cream of Wheat products may be less healthy, but I’m betting they taste a heck of a lot better. The question is not whether they are more nutritious than my Apple Jacks or Cocoa Puffs, but do they taste as good and will the family eat it.

The more simple the ratings the better. If we could come up with a simple system like we use with movies it would be best. Say:

NuVal, if supported by other promotions and social media, can be a viable initiative. It’s in line with calorie disclosure. Of course there’s no guarantee that shoppers will be influenced consistently. But there is greater awareness of the benefits of healthier eating. And if the cost involved does not outweigh perceived returns, there’s a good chance consumers anywhere, including low-income neighborhoods, will make different and better shopping decisions.

Anything that boosts awareness is a step in the right direction toward more informed choices at the shelf. Will it ultimately affect behavior? Perhaps to a very limited extent. However, consumers are fickle and may “desire” better health, but most aren’t doing a darn thing about it. And our healthcare system doesn’t help matters by continuing to focus on “sick care” rather than “prevention.” If NuVal also included a reward system for healthful behavior and eventual better outcomes, I believe the results would be far better.

Shoppers of all income levels have consistently told researchers that they would opt for healthier choices if they were as tasty and priced on par with the no-so-healthy brands. However, in many cases, healthier choices are not value priced, nor are they on promotion as much as the mainstream brands. Tastes are improving, but it’s difficult to compete with the wondrous taste of fat and sugar. I speak from personal experience on this one.

The NuVal program and its informational value could move the needle a bit, but without addressing taste and price, NuVal and other nutritional labeling programs will remain just a niche. To that point, to hasten the appeal of health products to low-income shoppers, retailers and brands should collaborate on specific nutritional deals, promotions and taste testings.

Among the population, with whom do smoking and obesity over-index?

Who thinks shelf talkers are going to make a difference? Is a retailer’s shelf the voice a shopper will trust to make a lifestyle decision?

I struggle with these “wellness” ideas, especially those focused upon lower HHIs.
Well intended, for certain. But these seem to be overreach in a retail store. And there is an unintended consequence. There is a “put-up/take-down” cost attached to it. And that cost will be passed along to those who need prices to stay low.

You know, “retail ain’t for sissies!”

I don’t think it will cause a wholesale change of eating habits. It does however seems pretty straightforward and if you are trying to decide between a couple of options the one with a higher nutritional score may have an edge over the others. I think posting it so prominently on the shelf gives it a better shot of success versus having to take the time to compare package labeling. Probably a good tool for all demographics.

Regardless of income, these scoring systems seem misleading. To some, any score is a good score. Of course there will be some change in shopping behavior. However, it will be minimal and insignificant.

There have been so many pronouncements and then “oopsies” related to the food pyramid, school lunch program requirements, fats, eggs, coffee, etc., that most people regardless of income are paying less and less attention both to these types of questionable metrics, and to someone else’s opinion on what is healthy.

Definitely in the “won’t help but can’t hurt” category; I suspect just getting many people to look at even the flavored cream-of-wheat for breakfast — as opposed to, say, a bag of Doritos and a Pepsi — would be a victory.

Another great idea, but likely to fail. First, few consumers even read the labels placed on every product. Second, it is rare a shelf tag lines up with the product. This means the consumer must first read the shelf and then search for the product. I have yet to see any shelf layout matching the one after a reset. Until there is real shelf discipline, shelf tags are just another thing the government requires.

Another problem is assuming all shoppers understand these metrics and the implications. I don’t think it’s fair to assume that even the majority of shoppers understand ONQI numbers. To that end, many shoppers go through stores quickly and do not add time for reading labels.

That being said, I think nutritional labels (in general) are nothing but beneficial. I hope that shoppers (no matter what income level) will benefit from the added information and make smart decisions.

As much it is a noble effort to educate, low income shoppers are the primary group who do not eat healthy, as much a matter of choice as a matter of lack of education and awareness. They are exactly the group that, as a whole, do not read labels, are ignorant of nutrition, fitness, lifestyle choices, etc. Plus this is exactly the group McDonald’s and other fast food companies successfully market to. Price drives food purchases for them and if they were cognizant of a healthier lifestyle, they would already be reading labels and most likely, in the process of elevating themselves out of the lower incomes.

Braintrust
"I predict a trivial effect, and I’d predict the same regardless of the shopper’s income. There’s only a small group of shoppers who are seeking out healthier alternatives — and they probably have a better feel for what is healthier."

"NuVal, if supported by other promotions and social media, can be a viable initiative. It’s in line with calorie disclosure. Of course there’s no guarantee that shoppers will be influenced consistently."

"Shoppers of all income levels have consistently told researchers that they would opt for healthier choices if they were as tasty and priced on par with the no-so-healthy brands. However, in many cases, healthier choices are not value priced."