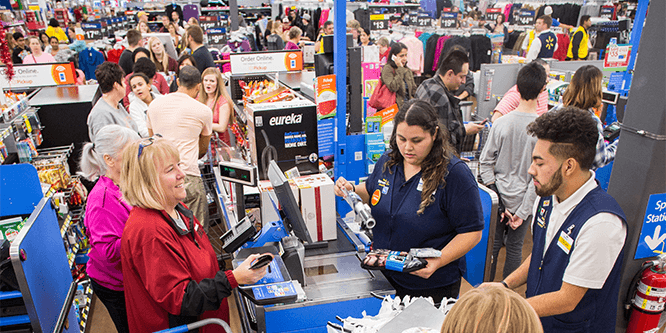 Walmart has faced criticism from some in the law enforcement community who believe that factors such as a lack of sales associates on store floors are leading to higher incidences of crime at the retailer’s locations. Some have questioned whether Walmart’s management and board are willing to incur the added labor costs necessary to deter shoplifters. While the chain has not publicly committed to adding large numbers of permanent workers to its labor force, it has come up with a new program that it believes will make thieves think twice about stealing from its stores.

According to The Joplin Globe, Walmart has a new program called “restorative education” that aims to dissuade those caught shoplifting for the first time from becoming repeat offenders. Under the program, individuals with no criminal record who are caught stealing from Walmart are given the option of paying $400 and taking an online course instead of being turned over to the police. If they can’t pay the $400, they are given the option of taking the course and paying $500 in four payments. Failure to complete the course or pay will result in Walmart pressing charges against the shoplifter.

Walmart told the paper that it instituted the program in Joplin, MO after running successful pilots in other locations. The local police department filed 512 reports in 2015 for the local store.

“We made a decision that if the overall goal is for us to try and reduce calls to police, the Restorative Justice Program allows us to not call the police at all and process the offender right on the spot,” Brian Nick, senior director for corporate affairs at Walmart, told the Globe. “(The program) has become more robust in the last month, and since the beginning of the summer, we’ve added hundreds of stores. It’s been a steady pace. The trend is continuing into additional markets.”

DISCUSSION QUESTIONS: Do you think Walmart’s “restorative education” program will make a significant dent in shoplifting attempts and apprehensions that take place in its stores? Is this the most effective way for Walmart to reduce crime levels at its locations across the U.S.?

Please practice The RetailWire Golden Rule when submitting your comments.
Braintrust
"It’s pretty bold for Walmart to take the law into their own hands in this way, but I can see their reasoning."

"For the time being I just want to believe it can make a positive difference for shoplifters."

It’s pretty bold for Walmart to take the law into their own hands in this way, but I can see their reasoning. When police fine a shoplifter the money goes back into the criminal justice system. By calling the police on shoplifters the company’s losses continue to grow whereas the fines instituted in Walmart’s “restorative education” program allow them to recoup some of the shoplifting deficit.

As far as reducing recidivism … the fact that the police won’t be called if they are caught will motivate more shoplifters to give it a try. Sure, most states’ fines for a first-time offense top out at $250, but the criminal record and potential jail time are way more deterring than being chided by Walmart security.

Still, they’re making money on this. If law enforcement allows it I foresee many companies following suit.

Walmart is smart to take an innovative approach to reducing petty crime. This policy could help reduce pressure on local law enforcement, particularly in communities with high rates of shoplifting activity in Walmart stores.

However, Walmart needs to move carefully as they exercise a quasi-law enforcement role. Their staff needs to be properly trained on protecting the shoppers’ rights as well as the store’s.

Walmart needs to find a way to turn shoplifting into a profit center, while at the same time reducing police calls to their stores. Perhaps $400 to $500 is just enough for a shoplifter to afford relative to going to jail and just enough to cover the cost of those who don’t get caught. In the old days of check writing, my dad turned a profit on bad checks by charging a fee. After 36 years of his store being out of business, our family still has been collecting on those checks. Last year we made about $500. I go to a lot of Walmart stores and it saddens me to see police cars in front of a store, real or mock, usually in high volume stores adjacent to areas of poverty and high crime. Customers get a creepy feeling seeing police cars and watching people lead out in handcuffs. It’s in Walmart’s best interest not to have customers see this happening. I’m not so sure it will reduce shoplifting, but it will make for… Read more »
1
|
-4
-   Share

The dirty little secret about retail loss prevention is that the police don’t want to respond to a call about someone dropping a package of steak into their pants. To the degree that Walmart can address the problem directly they win, and so do honest customers.

The accompanying articles indicate some police departments estimate calls regarding shoplifting at Walmart as being down as much as 40 percent. By that measure the program would seem to have accomplished one of its goals. By reducing the number of calls it may lessen the pressure for Walmart to do more internally to reduce shoplifting.

However, one of the links indicates that the Corrective Education Company who are providing the Restorative Justice program to Walmart is being sued for false imprisonment and overcharging alleged shoplifters. It will be interesting to see if in the long run this approach reduces the pressure on Walmart to lower the number of shoplifting calls to police or becomes another publicity disaster.

If Walmart is moving slowly on this initiative by testing it, they’re proving its worth to themselves, at least in terms of reducing shoplifting attempts.

I’m hopeful that this effort will also help those who use shoplifting as a solution to their challenges. For the time being I just want to believe it can make a positive difference for shoplifters. I’m for whatever can be done to facilitate a better crime-free life for them.

I am not viewing this as an example of Walmart being good citizens. I see there being two separate problems. First is the mother stealing food to feed her family. Second is more the young teens stealing to see if they can get away with it. What is being solved by arresting the mother? How then does Walmart expect her to pay the $400 to $500.00 ransom for the “Get Out of Jail Free” card? How did they come up with this number? How do they expect it to be paid and where does this money go? Does it go to funding a social program to rehabilitate? Or does it go to the bottom line? Your guess is as good as mine. But I am guessing the bottom line. Maybe Walmart should consider putting the shoplifter in an in-house training program and hire them to work off the amount, not $500. Just the amount of the items taken. Maybe, just maybe, Walmart might find they have hired some talented employees. $500 is a heavy price… Read more »
8
|
-5
-   Share

This has a slight ring of vigilante justice to it, so I’m not wild about it. Many of the folks who shop at Walmart do not have $400 or $500 in four increments. The education part of the program sounds ok, but I’d let it go with a one time warning, the merchandise gets returned, and the “offender” participates in a one hour class. They then get entered into a database of those who have been warned, and the police are called the next time, for real. Side note: I remember using a Walmart restroom years ago and seeing a sign that said something to the effect of “Steal from this store and it will haunt you for the rest of your life.” I guess this new approach is better, but I’m not sure by much.

I’m sorry, but any program that begins with the phrase “pay (Walmart) $400…” has little to do with restorative justice” and much to do with raising revenue. In fact, given that the program seeks to eliminate the legal system — and incidentally the safeguards of due process that system affords — it might be called extortion.

As Walmart’s plan is outlined, it looks to be giving an option to the shoplifter and to the store. It’s not vigilante justice, extortion, or lack of due process, it’s an agreement reached between the shoplifter and the store that allows both parties to keep the matter out of the criminal justice system. The alternative solution to the problem of excessive theft is to spend more money to increase onerous security measures (security tags, cameras, guards, sensors) and to follow through on arrests and prosecutions of shoplifter.

Braintrust
"It’s pretty bold for Walmart to take the law into their own hands in this way, but I can see their reasoning."

"For the time being I just want to believe it can make a positive difference for shoplifters."