Would Nordstrom be better off private? 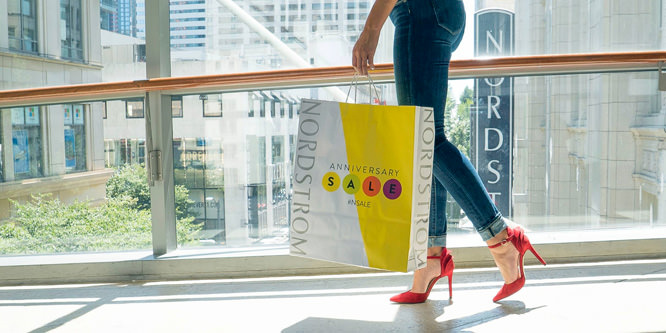 Last week, members of the Nordstrom family indicated they are exploring taking the retailer private.

“Because of the changing dynamics in the retail environment, the Group is evaluating whether the long-term interests of the Issuer are better served as a privately held company,” Nordstrom said in a regulatory filing. The family, which includes multiple company executives, collectively owns about 31 percent of the company’s shares.

An early aggressive investor in e-commerce, Nordstrom has adapted better than many to the changing retail environment. Online accounts for about a quarter of the company’s sales. The ramped-up expansion of Nordstrom Rack has also paid off.

But comps have declined at its full-line stores for seven consecutive quarters. And while its shares have performed better than many rivals over the last year, the cloud over department stores is leaving Nordstrom’s stock undervalued, according to analysts.

Taking the company private could help Nordstrom make changes that may benefit the business for the long-term but could work against Wall Street’s emphasis on short-term results. Management may make changes that could slow down sales and eliminate free shipping and liberal return policies in order to preserve long-term margins, all possibly with an impact on short-term online growth.

“It’s not unlike being an awkward teenager,” Greg Portell, lead partner at A.T. Kearney, told USA Today. “Nobody enjoys their teenage years because everything’s changing, and to do that in the public eye is very difficult and in many ways counterproductive.”

Nordstrom’s challenges include finding a private equity buyer to support the transaction on favorable terms with many major investors recently burned by debt-fueled buyouts in the space. Competitors such as Neiman Marcus and J. Crew are struggling with heavy debt loads following buyouts. The Sports Authority, Mervyn’s and Linens ‘n Things are just a few that have liquidated following LBOs.

On the positive side, Nordstrom is relatively less indebted than many of its peers and the family is staying involved.

“Sometimes you see families going private and selling to third-party investors and taking the money out,” Neil Stern, analyst with retail consulting firm McMillanDoolittle, told the Seattle Times. But it appears the Nordstrom family “wants to keep control of its legacy, of its business.”

DISCUSSION QUESTIONS: What are the pros and cons of the Nordstrom family taking the retailer private? Is the timing right, given the changes facing traditional retailers and the department store channel?

Please practice The RetailWire Golden Rule when submitting your comments.
Braintrust
"Nordstrom is absolutely correct that they will be able to respond better to the changing retail business out of the spotlight of the stock market."

"I think Nordstrom was driven to over-expand by the Street and now, no surprise, its comps have declined."

"Too many retailers are burdened by crushing debt brought on by private equity. Time to go private!"

9 Comments on "Would Nordstrom be better off private?"

I shared a recent experience at Nordstrom on my blog and the poor customer service wasn’t due to Wall Street priorities. Twenty years ago the Nordstrom Way was “disarmingly simple: Use your own initiative to provide customers with exceptional levels of service. You’ll never be criticized for doing too much for a customer, only for doing too little. If you’re ever in doubt, err on the side of doing too much rather than too little.”

I would suggest that their flagship sales declines have everything to do with employees erring to do too little to uphold that tradition. And with 30 percent of stock owned by the family, they own the customer experience being given. I don’t see how going private fixes that.

The intense scrutiny publically traded businesses are subjected to every quarter can be a significant burden to any business. With all the tumult and change happening in retailing, I suspect that it will continue to be a bumpy ride for retailers and perhaps department stores in particular. Now seems to be a good time to take Nordstrom private. This will enable management to execute new initiatives and make adjustments and refinements without having to deal with the distraction of Wall Street expectations and/or the impact on their stock caused by other retailers or industry issues.

Digerati like Amazon show the merest whiff of profit and Wall Street rewards them aggressively. Traditional retailers string together runs of 12 highly profitable quarters and Wall Street punishes them.

So, yes. Wall Street’s short-term thinking and obsession with out-of-date metrics like comps have been punishing retailers for far too long. I think Nordstrom is absolutely correct that they will be able to respond better to the changing retail business out of the spotlight of the stock market.

However, this choice would leave them in a tricky spot for raising capital — dependent on strong investment banking relationships.

Whether this is their best strategy isn’t clear to me, but I fully endorse their desire to get away from the absurdity of the stock market.

Wall Street’s emphasis on short-term results is a bane to many businesses and brings undue pressure on management. Nordstrom is no exception. Taking the company private would give it time to develop better strategies for omnichannel and how to reach Millennial and Gen Z consumers. However, going private is not a guarantee of success. And in the current retail environment, hedge funds are right to be cautious about retail investments.

Some of the research briefs I’ve read by “Street analysts” lately tell me that they are largely ignorant of the real necessities and dynamics in the retail market. When comp sales growth and square footage growth are driving their agenda and someone makes the decision that omnichannel investments are a bad idea, it’s a pretty good indicator that, if you can, it’s a good idea to go private, bring your money home in wheelbarrows and have an easier time of it.

I think Nordstrom was driven to over-expand by the Street and now, no surprise, its comps have declined. Absent the need for public capital, the company would be better served to go private.

In general going private allows a company to take a longer-term view of a strategy and execute without the pressures of Wall Street every quarter (with the notable exception of Amazon, of course, who was public and long-term focused). For a retailer today, though, I think the pace of change and the pressures to survive or thrive are a quarterly fact well beyond what any public company’s short-term pressures would be. Retailers today have more pressure being exerted on their operations by the shopper than from Wall Street.

Too many retailers are burdened by crushing debt brought on by private equity. Time to go private!

Nordstrom has been better than its peers at investing for the long haul as evidenced by their eCommerce buildout and single view of inventory. The department store business remains challenging and the need for a fundamental re-think and more investment is still there. Nordstrom’s prospects of success are greater if they go private and no longer have to balance stewardship of the brand and business with meeting short-term, Wall St. analyst driven expectations.

The advantages are much the same as any business. Greater control and keeping all the profits. Then there are the disadvantages — less access to capital, more debt, and the danger of an insular culture developing. Of course retail is more stressed right now than many businesses, so perhaps the stakes seem higher.

Generally I’m not a fan of “going private” as (all too) often the move is engineered by outsiders for short-term motives. Obviously the motivation is different here — at least I’m hoping/assuming it is — so that eases some concerns I normally have, but it would of course nevertheless be a loss for investors in that they could no longer be a part of the company (at least an equity part).

I wish them well in reaching the right decision.

Braintrust
"Nordstrom is absolutely correct that they will be able to respond better to the changing retail business out of the spotlight of the stock market."

"I think Nordstrom was driven to over-expand by the Street and now, no surprise, its comps have declined."

"Too many retailers are burdened by crushing debt brought on by private equity. Time to go private!"