Zulily thinks it can beat Amazon and Walmart on price 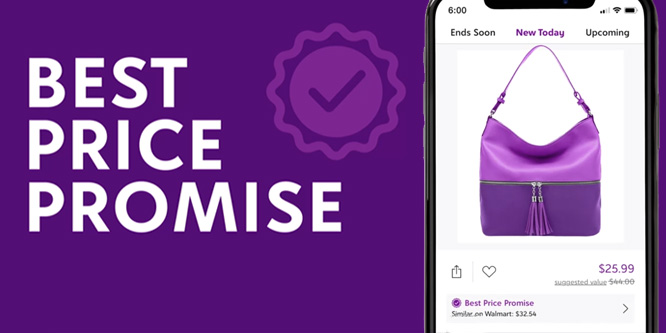 Who’s the low-price leader? Zulily is — at least that’s what the flash sales site’s management team seems to believe. That would explain why the online seller announced the launch of a new price comparison tool pitting its prices on like items with Amazon.com and Walmart, as well as a guarantee that it would match the prices of those two competitors should they somehow have a lower price.

Research conducted by Wakefield Research found that 38 percent of American consumers viewed Walmart as having the lowest prices. Twenty-seven percent thought Amazon offered the lowest prices. Zulily, however, claims that its site’s new price comparison feature shows it to have lower prices on identical products 97 percent of the time.

In launching its price comparison feature, Zulily is looking to become part of the shopping research process heading into the holidays. The company points to two Google studies to support its decision: one shows that 59 percent of online shoppers are doing more comparison shopping than in the past, and another that found 90 percent use more than one channel when shopping for gifts.

Zulily, which was acquired by QVC in 2015, claims that Wakefield found that its prices were 24 to 30 percent lower than those offered by Amazon or Walmart on the same items in 16 separate product categories.

“We are confident that we provide shoppers the best deal. Pricing is so easily obfuscated across the web. When you think about saving $5-$10 on an item, and purchasing multiple items, per order, which many of our customers do, that’s meaningful to a household budget at scale,” said Jeff Yurcisin, president of Zulily, in a statement.

Zulily’s price comparison feature will appear on the pages of its website and app displaying products also sold by Amazon and/or Walmart. The flash sales site will have a UPC code matched to identical items sold by the two larger rivals with prices from those sites appearing alongside Zulily’s offer. In cases where Zulily has a higher price, it will match the lower offer from either competitor.

DISCUSSION QUESTIONS: Will Zulily succeed in capturing customers from Amazon and/or Walmart during the upcoming holiday season by way of its price comparison tool and match guarantee? Will this strategy benefit Zulily in its competition with other retailers?

Please practice The RetailWire Golden Rule when submitting your comments.
Braintrust
"Getting into a price war with Amazon and Walmart is a bad idea anytime, but provoking that war heading into the holidays is like wearing a meat suit to a lion convention."

"News alert: there’s always someone cheaper, always. Does anyone believe any retailer saying anything is the lowest price?"

"Playing the price game is a one-trick pony – you may get a short term bump, but the long-term consequences can be devastating."

Lower prices almost always plays well with consumers, but going head-to-head with the two price-leading giants of the industry may be beyond bold – it could negatively impact their business for several reasons.

The first issue is awareness of Zulily relative to Walmart and Amazon – two are well-known, household names, Zulily is not. Second, Walmart and Amazon are retail super powers with the supply chain, buying power and financial wherewithal to combat any price action. And third, if the end result is that Zulily customers who would have purchased anyway now pay less because of the comparison tool/price match, then Zulily will be leaving money on the table. Playing the price game is a one-trick pony – you may get a short term bump, but the long-term consequences can be devastating.

They say that history repeats itself, and that is no different in marketing. Years ago, companies would advertise the lowest price guaranteed and all you had to do was bring the newspaper ad into a competitor. Often they would match or beat the price. So this is not a new concept, but an old one with a different spin because it is online.

The problem will be twofold: 1.) can Zulily continue to beat Amazon as it says 97 percent of the time and 2.) can they gain enough market share to go against the online giant? It’s hard to say, and only time will tell. I do see this as very risky for Zulily and I’m not sure if, in the long-term, this will be successful for them. Amazon has a significant market share, and often it is not the truth that matters as much as the perception. Customers perceive Amazon as the best place to shop for deals. So Zulily is going to have to get consumers beyond that type of thinking.

There is little new under the sun, just prettier packaging, smaller, faster, cheaper. First there were smoke signals, now there is the Apple (Dick Tracy) Watch…

It’s apples and oranges. The issue with Zulily is that products are only available in limited quantities for limited times. Yes, they can win on price, but customers also shop on the reliability that the product will be available. Based on my experience, this is not something Zulily currently delivers.

I agree with Bethany. Zulily nabbed its base from FOMO and deals–GREAT deals on limited quantities, but you couldn’t return anything. So, the risk was on you and you had to be on the ball to get the treasures before they were gone! Now, there’s too much going on in there–too many choices, not enough quality, still shipping and returns frictions. This is an option for gifting sure … but it’s not the same model.

This is a dangerous road to travel. The old, funny retail adage is: “We lose two cents on everything we sell, but we make it up in volume.” It doesn’t work.

News alert: there’s always someone cheaper, always. Does anyone believe any retailer saying anything is the lowest price? And if so, are they enough to move the needle of increasing sales? It’s not the 1950s.

The constant flow of daily deals and the prominence of those ending soon support the company’s tag line, “a new store everyday” as the company nudges shoppers to click buy. It’s important to note that these comparisons and matchings with Walmart and Amazon apply only to online prices and not to physical stores; also that they exclude any clearance or close out type of sales.

This is all about demonstrating what makes Zulily different and comparing their pricing to Amazon and Walmart is a powerful way to convince customers that they really do offer great deals.

For those suggesting that getting into a price battle with Amazon is a mistake, consider that Zulily selects the limited items they will offer and they only do that when they can get an awesome deal and they know they can win on price. Zulily isn’t competing head-to-head with Amazon on what Amazon sells, they are saying that they can match or beat Amazon on everything that Zulily sells.

How many customers will at least check out a site that says it can beat Amazon? I’m betting it’s enough to make this price match challenge pay off.

Zulily buys at a deep discount the inventory that brands must move. This offers an always fresh assortment at low prices. Zulily is doing the item selection on their own terms – they create the game and set the rules. Their challenge is to minimize their supply chain costs and maximize consumer awareness so their buying advantage is realized.

The retail graveyard is full of brand names who thought they could beat the “low price leader” on price, and today those leaders are Walmart and Amazon. Those two giants are competing on far more than price, however: Their mastery of logistics keeps their costs down, which in turn allows them to be price-competitive. Part of their value equation is great execution of broad assortments, not just “lowest price” — so Zulily is going to need a different sustainable advantage to gain market share.

Talk about bringing a knife to a gunfight. Getting into a price war with Amazon and Walmart is a bad idea anytime, but provoking that war heading into the holidays is like wearing a meat suit to a lion convention. Zulily may have found its prices to be lower, but that was when no one was paying attention. Once you’ve roused the giants all bets are off. Betting solely on price is rarely a growth strategy, and the coming battle will just be a race to the bottom.

Before competing on price, I would suggest competing on or exceeding the competition on service. From my experience, it takes much longer for a Zulily package to get to a customer versus both Amazon and Walmart – so by matching price what does the customer get? An item to come a week later? Doesn’t sound like a winning proposition to me.

While many retailers like to think acquiring consumers using price is a winning strategy, more often that not, a price war gets triggered. It is hard to imagine that Zulily has a supplier and logistics cost advantage over Amazon and Walmart. A few moves on key products by them can easily erode a lot of Zulily’s margins quickly and then it becomes a race to the bottom. Many companies that are now almost extinct have tried price match guarantees (RadioShack comes to mind).

Braintrust
"Getting into a price war with Amazon and Walmart is a bad idea anytime, but provoking that war heading into the holidays is like wearing a meat suit to a lion convention."

"News alert: there’s always someone cheaper, always. Does anyone believe any retailer saying anything is the lowest price?"

"Playing the price game is a one-trick pony – you may get a short term bump, but the long-term consequences can be devastating."