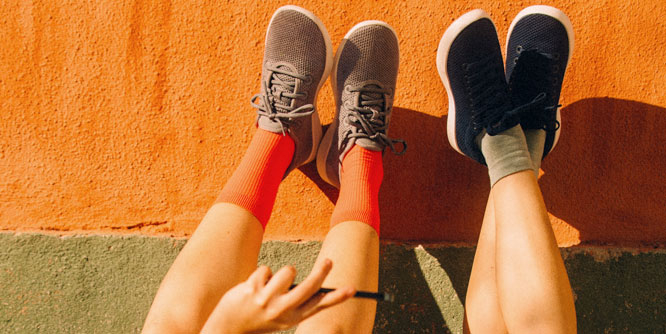 Allbirds, the environmentally-friendly footwear upstart, has opened third-party distribution for the first time. The first wholesale partners in the U.S. will be Nordstrom and Public Lands, Dick’s Sporting Goods’ new outdoors-themed banner, and in Europe, Zalando.

The woolen shoe company is known for its commitment to sustainably sourced materials and ingredients, but also its “vertically-led omnichannel strategy,” said Joey Zwillinger, co-founder and co-CEO, on Allbirds’ first-quarter analyst call.

The brand first began selling online in 2016 and has 39 stores.

“I’m not aware of any substantial brand that we compete with that has even 50 percent of its distribution by a vertical model. And we sit here today at greater than 99 percent being conducted in this manner,” said Mr. Zwillinger in announcing the entry into wholesale distribution. “These additional consumer touch points can be another powerful and profitable element to catalyze additional growth in our vertical retail strategy by increasing brand awareness across our target consumer segment.”

He noted that Allbirds’ U.S. aided brand awareness is currently in the low-double digits.

“We are going to be selective and really methodical about how we grow this, and we don’t expect a particularly material impact to 2022,” said Mr. Zwillinger. “But we do think that that will start to really provide a catalyst in and of itself and then also haloing into the direct business starting in ’23.”

The move into wholesale distribution comes as athletic competitors, including Nike and Adidas, have been consolidating wholesale accounts in order to benefit from direct connections with consumers and higher margins.

Speaking to CNBC, BMO Capital Markets analyst Simeon Siegel expressed how brands such as Ralph Lauren and Calvin Klein owner PVH have proven wholesale distribution can be beneficial as long as over-distribution and excess promotions are avoided.

DISCUSSION QUESTIONS: Do you see more benefits than risks in Allbirds’ move to open up wholesale distribution? What other wholesale partners would make sense for Allbirds?

Please practice The RetailWire Golden Rule when submitting your comments.
Braintrust
"Placement in Nordstrom and Dick’s Public Lands will give Allbirds the added exposure it needs; choosing upscale partners will uphold its quality image."

It’s tough for single-category retailers to make it strictly with owned physical stores and online. Like all the “DTC darlings” Allbirds needs to get to profitability. Following in the footsteps of Casper opening up wholesale, expect others (Away as an example) to follow suit.

In spite of the typical hyperbole in its IPO prospectus, Allbirds takes the obvious path to growth and notwithstanding the comments (in the prospectus and subsequently), strategic wholesale distribution is essential for the category. The key, as noted, is being strategic and working with partners that are well run, have a semblance (at least) of pricing discipline and understand their customers.

Given that Allbirds’ existing model is not profitable, this seems like a sensible move which will both increase awareness and generate more sales with better margins. The partners have been carefully selected and are a good fit for Allbirds. They also cover the different parts of Allbirds’ range: Nordstrom for more fashionable/casual footwear, Dick’s for the athletic offer, and Public Lands for the hiking/outdoor offer. Given Public Lands has a pretty small store footprint, REI would also be a good partner for Allbirds.

Allbirds is beloved and has a cult following, so introducing Allbirds to the masses is what they need to become to a really big brand. They just need to keep it manageable to live up to their sustainability promise.

With mega brands like Nike and Adidas jumping ship on retailers, chains like Dick’s and Nordstrom were probably eager to do a deal like this. Allbirds checks all the boxes for Millennials’ footwear shopping and environmentally friendly needs. Allbirds certainly knows that Nike and Adidas did not build their empires going vertical only. If the Dick’s deal in particular is not exclusive, then I’d expect every sporting goods brand on the planet to want to carry them, too.

The way brands get noticed is by being in front of consumers. Allbirds has 39 stores and yet I have never been in one of them.

Placement in Nordstrom and Dick’s Public Lands will give Allbirds the added exposure it needs; choosing upscale partners will uphold its quality image.

If the decision is to embark on a wholesale strategy, it doesn’t get any better than having Nordstrom and Dick’s as your partners. And I do mean partners. Both retailers have a deep understanding of their customer. You can’t buy your way into Nordstrom with a margin deal. Nordstrom has to completely believe that the brand/product/customer marriage is a 100 percent match. Nordstrom succeeds on selling products at the ticketed price, because the price and value are real. And the customer has to agree in the absence of a coupon or promotion. Having a presence in Nordstrom and Dick’s is a real coup for Allbirds. Significant upside sales without significant upside costs or exposure.

The key here is going to be execution for Allbirds’ retail partners. If presented well in an upscale environment, Allbirds will be even more successful than they are now. They can grow well beyond the cult stage.

Allbirds has brand recognition with influencers. Now they need to scale up in order to get to profitability. I think this move will help them break out and grow. It expands exposure of their brand and they are doing so thoughtfully and with the right retailers in my opinion.

I’ve been waiting for this to happen — Allbirds is a great brand, but in starting from scratch, it’s hard to imagine gaining scale all on your own in a fairly quick manner. If they pick brands that fit their goals, this should be what they need to get to another level for all involved, especially investors.

There’s an old saying, which is “you are known by the company you keep.” Allbirds distribution partnerships with Nordstrom and Dick’s builds upon what is already a strong brand. These partners have high customer trust and are great brands in and of themselves. If Allbirds were to stumble, it’s only because they didn’t manage the relationships well or they went down an odd product path.

Braintrust
"Placement in Nordstrom and Dick’s Public Lands will give Allbirds the added exposure it needs; choosing upscale partners will uphold its quality image."