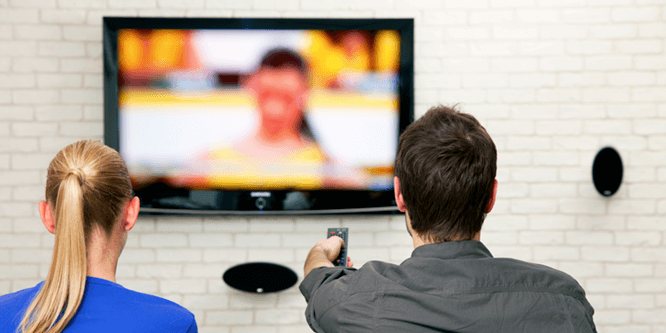 While offering original movies and TV shows has long been touted as a perk to boost Prime membership, Amazon is rolling out another way to capitalize on its content: product placement.

“The first shows will exhibit dishes from the northern island of Hokkaido and feature local comedy duo Taka and Toshi, who found nationwide fame with Yoshimoto,” according to Nikkei.

Viewers will be able to tap Amazon’s “1-Click” icon to order certain products featured in the program.

The initially planned four episodes will run around 40 minutes each. Future videos will feature other places in Japan, as well as “some locations overseas,” Nikkei says.

“The idea that you could have whatever you want by just clicking a button is certainly enticing, but having the ability to constantly consume is a weird future, to the say the least,” wrote Leslie Horn on Vocativ, a news site focused on media and technology. “Although, I’m sure most people have had the experience of watching, say, an episode of Anthony Bourdain’s ‘No Reservations,’ and wondered what the culinary oddity he’s sampling tasted like. With Amazon’s new strategy, one wouldn’t have to wonder.”

The one-click proposal expands on the Dash Button, Amazon’s one-click replenishment system launched in 2015; the one-click “Buy it Now” button on its website, as well as the one-command ordering through the Echo voice-enabled assistant.

Past studies have shown that among the main reasons for online cart abandonment are the need to enter a shipping address or payment information and unexpected shipping costs.

Is adding one-click purchases to products seen in Amazon Prime Video content a potential game changer or a small way to subsidize the service’s costs?

Please practice The RetailWire Golden Rule when submitting your comments.
Braintrust
"There will be some kinks that have to be worked out, but what an interesting start."

"This is really nothing more than an extension of what Amazon already offers online."

"Impulse merchandising is critical in food sales. What better environment than the wildly popular cooking shows?"

This idea is completely old. Many startups have tried a similar concept going back many years and since I don’t hear much about them, I believe it has gone nowhere. However, they were not Amazon.

There are two factors that favor Amazon succeeding where others failed:

I’m sure Amazon has been watching the countless startups that have attempted to roll something like this out. Not only do they have the brand and the logistics; they have the advantage of learning from all the previous attempts.

I just don’t think Amazon is paying attention — or that their hubris blinds them to how many people have tried and failed.

Here’s what I wrote in 2010 when QVC (who should be able to pull this off of all companies) tested it.

What Amazon has missed is that the prior attempts failed for CONSUMER reasons not TECH reasons. Interesting too that Amazon is following Facebook who just announced they were chasing one-click ordering down a hole as well.

However it came about, Amazon is simply not paying attention to experience OR consumers.

One-click ordering completes the cycle of branded entertainment. See it. Like it. Get it. Pretty simple. If any company can successfully pull this off, it’s Amazon.

This is how technology, marketing, selling, etc., is evolving. Amazon is eliminating steps between seeing a product in a movie or on TV and actually making a purchase. That’s one of the things that Amazon is really good at. Making it easy for the customer to buy with as few clicks or steps as possible.

We are seeing the future. It’s happening right in front of us. This is the first iteration of this type of marketing/sales technology. There will be some kinks that have to be worked out, but what an interesting start.

I concur with my fellow (brain) trustees. The question that remains is how much volume in sales this feature will generate. I predict a significantly lesser amount than those purchases in which the consumer can think about it a little before pulling the trigger (or clicking the “buy-it-now” button).

If the show is something like “Sex in the City” where watchers are drooling over Sara Jessica Parker’s shoes, then this could be a big hit. And if anyone can pull it off, it’s Amazon. But …

I would almost rather be able to one-click the items into my shopping basket to mull over later. I’m not much of an impulse buyer and with today’s frugality, i suspect I am not alone.

The environment is the key to this one — and it will be a success. Impulse merchandising is critical in food sales. What better environment than the wildly popular cooking shows? We watch a few regularly and I am certain that more of those ingredients/dishes wound up on our shopping list since Alexa came to live with us. This would make even that seem laborious. Amazon gets shopper involvement better than most retailers. Another great example.

This is a terrific idea. Online retailers, in my opinion, have not been nearly focused enough on driving impulse purchases. E-commerce may be principally driven by considered purchases, but there is still plenty of room for impulse purchases to occupy a far more significant portion of the basket than we see today.

This makes perfect sense, as a smart way to further monetize their media distribution, getting buyers at a peak of intent. Surely they’ll start with sold-by-Amazon goods, then extend to their marketplace vendors to be dominant GMV. If anyone can make this work, it’s Amazon.

The “product placements” are simply promotional advertising. One-click ordering is a desirable (and achievable) gold standard in the online world and has been promoted by many retailers, including Amazon. This is really nothing more than an extension of what Amazon already offers online.

Definite game changer. I’ve been predicting this trend since 2010. Target is already doing a version of this with it’s Shazam commercials that take viewers directly to the product landing page on their mobile site. All of the major media players from Comcast/NBC Universal to AT&T/DirecTV are furiously working on rolling out their versions. With the ability to bypass TV ads and block online ads, consumers are becoming immune to standard advertising (both traditional and digital) and Amazon is (as usual) ahead of the game with one-click product placement. The ability to exploit consumer “buy now” impulses during a program is far too promising to ignore. In addition, the data derived from this application trumps audience views and takes PPC one step further. TV-commerce is the next retail channel (literally) and the only question is who will be next and which content partners will make the process easiest for retailers and consumer goods companies.

This concept can be related to the success of Houzz, which shows beautiful rooms to people on the app, which people can then click. Maybe not the same concept exactly, but I think it has a future. Others have said this concept is not new and has failed miserably, which I agree with, but there is a caveat. Not only just having the Amazon brand, but a new wave of consumer based culture will eat this stuff up (literally). This concept plays on the consumer’s impulse to get something they like, which makes the purchase more emotional, and easier to lead to a sale. The real-time aspect of this (of which I have never personally come across another example) is the greatest asset. People forget quickly about brand mentions, and only until they figure out they need it, do they buy it, and you may not be the brand at the top of mind awareness when this decision is made. This could work its way into a whole lot more applications than simply cooking shows.… Read more »
0
|
0
-   Share

Braintrust
"There will be some kinks that have to be worked out, but what an interesting start."

"This is really nothing more than an extension of what Amazon already offers online."

"Impulse merchandising is critical in food sales. What better environment than the wildly popular cooking shows?"