Are Americans ready for a c-store that sells only healthy foods? 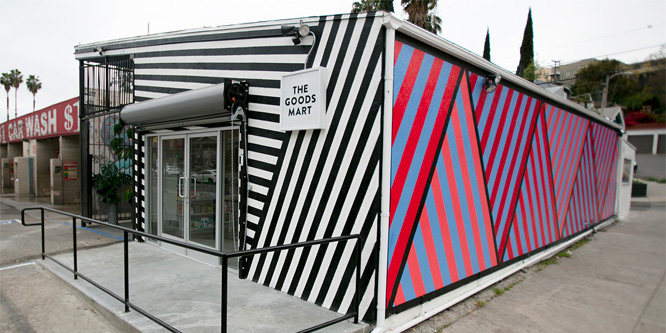 Even as c-store operators integrate healthier snacks like protein bars, yogurt, fruits and vegetables onto their shelves, candy, chips and soda still tend to dominate. But in California, Rachel Krupa, founder of The Goods Mart, aims to change that with a c-store that only stocks a healthy and sustainable assortment.

The Goods Mart convenience store in Silver Lake, CA is a 900-square-foot space laid out much like a 7-Eleven, according to Moneyish. But the product mix consists of healthy and sustainable products like non-GMO pressed juices, “ugly” produce (to reduce food waste) and organic slushies. The store also features popular “natural” CPG brands like Annie’s Homegrown, Amy’s Kitchen, Cliff Bars and Kettle Brand chips.

While the shelf selection may look more like that of Whole Foods than a gas station c-store, Ms. Krupa told Moneyish she envisions the store being a neighborhood meeting place akin to the rural Michigan Sunoco station she visited as a child. She hopes to expand the store beyond a single location.

The Goods Mart concept arrives at a time when some of the biggest names in CPG have been rolling out better-for-you offerings to meet demands for healthy (or at least less unhealthy) snack foods. Last year, Hershey acquired Amplify Snack Brands, owner of SkinnyPop popcorn, and Campbell Soup acquired Snyder-Lance, owner of Snyder’s of Hanover pretzels.

Shifting customer expectations and a focus on health may be driving the change in what c-stores are stocking and serving, but it seems likely that tech innovation is in part tied to concerns over potential disruption from Amazon.com. The tech giant’s cashier-less Amazon Go concept could impact both shopping and employment at c-stores. Perhaps in response to that pressure, 7-Eleven recently began piloting tech enhancements such as mobile app-based ordering, in-store pickup and delivery.

DISCUSSION QUESTIONS: Do you see potential for a store like The Goods Mart to grow into a major chain? How likely is it that a Goods Mart-like concept will be tested by a mainstream convenience store operator in the near future?

Please practice The RetailWire Golden Rule when submitting your comments.
Braintrust
"I LOVE this! And it's about time ... Now how about fast food following in their inspired footprints?!"

"I’d love to join the crowd here, but my professional opinion is “DOA” — at least in terms of any definition of “major chain.”"

"This reminds me of the tale of Whole Foods and its selling of organics. It initially set them apart from other food retailers..."

17 Comments on "Are Americans ready for a c-store that sells only healthy foods?"

Why should a convenience store have to mean junk food? Smaller footprint, good-for-you stores, in neighborhoods like Silver Lake, make sense. Their offerings are what the local populace wants. I look for more c-stores to offer healthy foods, and if they don’t, for competitors to challenge them in the marketplace.

From the look and feel of this concept, I get boutique more than c-store. I am sure there would be a place for this type of store on trendy Miami Beach and other such locations where health-conscious shoppers can be found hanging out. Mainstream c-stores, for the most part, are where travelers, truckers and day workers stop to gas up and load up on food for the day. Perhaps a mainstream c-store operator would consider a store-within-a-store type concept to offer to their healthy-minded customers such products, however this concept is not ready for prime time along the highway exits of today. But that is just my 2 cents.

I agree with Max, I LOVE this! And it’s about time. Site location to tightly match the tastes and preferences of the neighborhoods will of course be key — and having some exclusive and “healthy” treats as well. I hope they have some locally-sourced items. The store design is very clean and nice, but it does look a bit sparse and could use a little more liveliness — but two snaps for going there first! Now how about fast food following in their inspired footprints?!

Who decides what’s healthy? Who gets to pick the product, price point and profit off of it? Who is excluded from access in the process of doing so? The Silver Lake neighborhood of LA is majority Latinx (42 percent) with a significant Asian (18 percent) population as well. I can’t see the shelves beyond the brand names mentioned here, but I wonder: Does this store carry healthy products from companies that are owned by people in these demographics, or popular grocery items used in Asian and Latin American recipes? Does the product line and price seek to include or exclude people from shopping there? This shop is beautiful, but I can’t weigh in on it being “the future” of the c-store unless I know the healthy products inside are affordable and accessible to everyone in the neighborhood it dwells in. Otherwise, it’s an inconvenience store!

Finally! I always wondered why Whole Foods hasn’t done this. You could say Trader Joe’s is in this space already but somehow they have also been unable to truly proliferate. If there’s 450 Whole Foods, you could have 450 of these in the same demo tomorrow. From there, it could get to be more of a challenge, but you certainly could have 20 of these in NYC right now. It’s about time.

I do not see the potential for this type of store to grow into a major chain. It may grow to at most 50 stores in places like California, Oregon and Washington State. What may work is for traditional c-stores to add more healthy food items to their mix. The real need for convenience items such as candy, cigarettes, beer and soda will still dominate the role of the c-store and, with the addition of gas to the mix, a healthy-only type of store can only exist where the population is into an organic, health-related lifestyle.

This is a need that is going to be realized more as the younger generations become the higher percentage of drivers. I can see the boardrooms of the traditional c-stores looking at this and planning how to combat what could be a problem for their traditional business. So my way-out, long-range prediction is that we will start to see the traditional c-stores changing their shelving to accommodate sections of “healthy” foods.

I’d love to join the crowd here, but my professional opinion is “DOA” — at least in terms of any definition of “major chain.” As a very geographically-targeted destination boutique, it probably can survive.

For the record, I hope someone gets to throw this one back at me in five years or so when we are all still here prognosticating. (SO many assumptions in that statement, eh?) I’ll buy the green tea if it happens.

This reminds me of the tale of Whole Foods and its selling of organics. It initially set them apart from other food retailers and made them the place to shop for them. However, over time other retailers began sourcing and selling organics and it became another category rather than a point of differentiation. I can foresee this being a niche business in select markets driven by local demographics, but not a major chain.

If you build it, will they come? I’m not surprised that in our time poor society convenience stores continue an upward trend. Convenience often means paying a premium, something that health food is already synonymous with in the eyes of the consumer. It will be interesting to see where the price point lands for convenient health.

Dietary habits have changed quite significantly with larger portions of the population — particularly within the Millennial generation — opting for vegetarianism, veganism and similar dietary/nutritional themes. Many of these are fresh in nature and require more discipline to maintain a broadened assortment suitable to offer within their prescribed shelf lives which is one reason choices are often limited. As a frequent traveler, even with a less constrained diet, I often struggle to find healthy choices of food and drinks to consume when time is limited. I could see there being a market for healthy choice focused c-store chain(s). I would expect the market to be most welcome in more urban areas initially but as the trend toward healthy and fresh continues to grow I could see the need for current c-stores to shift to accommodate customer segments with these preferences as well. This will ultimately impose the need for better managed supply networks and systems driving them to ensure that product freshness is consistent and waste is managed accordingly.

Nice idea, nice look, poor concept. It may fill a small niche, but just a nice idea. Will not take off because it is too focused on a very small segment of the market. It is a nice 900-1200 foot local store.

Full disclosure: Every time my sister and I go on a road trip, we make a convenience store stop to buy bags of junk food that we rarely eat in our every day life. Don’t judge. Our father worked for a candy company, you might say it’s a family tradition. That being said, I think a healthy options convenience store is a great idea.

In spite of my love for food that isn’t good for me, at home I choose to cook with fresh, whole foods. My Millennial children do the same. And when I travel for business I look for healthy options that are tough to find, especially in and around hotels.

So, as a consumer, I would welcome this type of convenience store. But as a consumer anthropologist, I’m not sure if we’re ready to have Goods Marts replace 7-Eleven. Americans are still big fans of Twinkies.

While I wish Ms. Krupa well, this seems to be an idea born out of nostalgia, rather than careful research. For one thing, the logistics seem counterintuitive. If I understand the location correctly, it is in the middle of LA, and while this probably makes sense in attracting as large a market as possible — logical with an unproven concept — it would seem to work against the recreation of the “rural … gathering spot” she remembers.

And of course many will question the segregationist approach. Why can’t a store carry “good for you” items ALONG with more conventional ones? To me that would seem to be a safer route to test.

Love this idea and love the simplicity of attacking an industry that is ripe for disruption. Has 7-Eleven really changed in the last 20 years much? Location choice will be huge. I can see a gas station trying to maybe up their game by becoming a higher-end gas station with this type of convenient store. I can see the mainstream stores for sure testing this concept, or perhaps The Good Mart can grow like Whole Foods and be ripe for acquisition.

I see it as a niche play for areas like San Francisco, Miami and perhaps resort towns. The definition of convenience store is convenience first, healthy second. Existing c-stores can add health items if they wish, all a matter of merchandising and sales. I think they can draw in the right market, but in terms of large scaling, I am not seeing the appeal.

In my experience, the convenience store shopper is different. C-stores are a little like Las Vegas … what shoppers buy there oftentimes does not get spoken about outside the four walls (think beer, beef jerky, cigarettes, candy, etc). For this reason, this idea won’t fully supplant existing c-stores.

Braintrust
"I LOVE this! And it's about time ... Now how about fast food following in their inspired footprints?!"

"I’d love to join the crowd here, but my professional opinion is “DOA” — at least in terms of any definition of “major chain.”"

"This reminds me of the tale of Whole Foods and its selling of organics. It initially set them apart from other food retailers..."