Are consumers and retailers ready to go all-in on shop-and-scan tech? 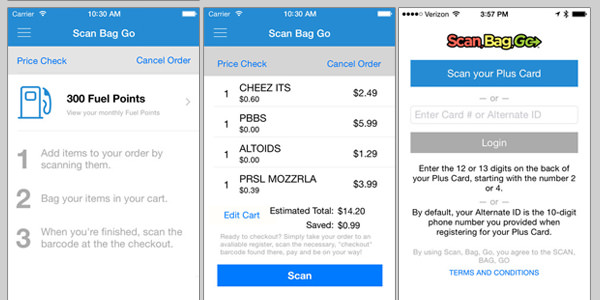 Ask consumers what they dislike most about shopping in stores and checking out will be at or near the top of list. In most cases, speed (i.e., lack thereof) is the primary reason so many are unhappy with the process.

According to a survey this summer conducted by Harris Poll for Digimarc Corporation, 88 percent of adults in the U.S. want checkouts to be faster. Retailers have tried a number of different ways to speed the checkout including using a queue system with an employee directing shoppers through the front-end, self-checkouts, associates using tablets and the deployment of sensors to adjust lanes in operation.

Another option, which has been around for a number of years but has yet to be used broadly, is the use of hand-held scanners. Now comes word that Kroger has decided to expand a small pilot that puts personal scanners in the hands of shoppers.

According to a report by The Enquirer, Kroger has decided to test its “Scan, Bag, Go” system at 15 stores in the Greater Cincinnati area. The grocery chain operator, says the newspaper, has been tinkering with the technology by providing shoppers with personal scanners going back to 2009. The twist in the current system is making it possible for shoppers to download an app and use their own mobile devices to shop and then check out.

“Customers tell us they love scanning and bagging and seeing their grocery bill while they shop,” Keith Dailey, a Kroger spokesperson, told The Enquirer.

How likely is it that shop and scan devices or mobile apps allowing consumers to use their own devices will catch on in a significant way at retail in the next five years? What are the impediments to adoption? What do you see as the opportunity?

Please practice The RetailWire Golden Rule when submitting your comments.
Braintrust
"I can’t predict if or how long it will take to happen. But consider what was said back when the airlines asked customers to book their tickets online. Then eventually to check in online."

"Until something like Near Field Communication (NFC) becomes practical for packaged goods, this is NOT going to happen. Stop investing hundreds of millions in new ways for shoppers to assist retailers. It’s supposed to work the other way around."

"If retailers are concerned about the risks of this approach then they could consider phasing it in by initially offering smart phone payment as an option to their most loyal customers before evaluating the impact and expanding the program."

14 Comments on "Are consumers and retailers ready to go all-in on shop-and-scan tech?"

Stop & Shop. Don’t shop there, but they had (have?) scanners for customers to use on their in-store journey, so the concept sure isn’t new. The only twist is using an app on a mobile device instead of the store’s device, which can have added benefits.

As logical as this seems, adoption will likely be very slow. People are habitual and have been trained to bring their carts to the front, unpack, scan or be scanned and then repack. The only way to move adoption forward faster is to have venues with no other option but to check out this way, meaning no registers.

Until then, the only other speedy check out is another now old concept, item-level RFID tags whereby the entire cart is scanned without removing items that are already bagged as consumers fill the cart.

BYOB is being updated to BYOS, “Bring Your Own Screen.” The opportunity here lies with Millennials, now the largest U.S. generation. Millennials check their smartphones 45 times per day. They shop for food online more than any other generation. These digital natives do not shop at traditional retailers the way preceding generations did. If brick-and-mortar retailers want them to shop in their stores, the issue of checkout needs to be addressed. The Kroger test should provide some answers.

I can’t predict if or how long it will take to happen. But consider what was said back when the airlines asked customers to book their tickets online. Then eventually to check in online. It took a number of years before a tipping point where this became the norm. Customers had to be “trained” to use the system and shown the benefits of doing so. This is the same situation.

Adding scanning to the shoppers’ aisle-by-aisle trip is never going to extend to more than 10 percent of the shoppers. This has been done by what is now Catalina Mobile since 2001, and has also had fairly wide deployment in Europe. Until something like Near Field Communication (NFC) becomes practical for packaged goods, this is NOT going to happen. (And it will be something like the Apple Watch that does it!) Stop investing hundreds of millions in new ways for shoppers to assist retailers. It’s supposed to work the other way around.

I recommend doing a mock trial-run of “shop and scan” with your phone at any store. Walk down the aisle and pick up items and pretend you are scanning them with your phone to see how awkward this experience really is.

A better form would be sit and shop — sit at the lounge/cafe inside the grocery store/retail outlet and shop from a phone or tabletop kiosk, go check out an item you have a question about and finalize your list. Place your order then show up at the pickup area when you are alerted that your groceries/packages are ready for pickup through a mobile notification.

The use of mobile applications as an engagement and commerce tool in-store seems to ignore a fundamental aspect of the technology, that being, the shopper is in control of the experience. So with a little ingenuity, we can come up with a mobile app that “sniffs” when a scanner is being used and offer the shopper a price comparison app to compare the price I just scanned on my “retailer’s app” to what I could purchase that same item for in another store or online. Open networks, where the consumer owns and controls the technology, fundamentally reverse the retail relationships. Some of these concepts like shop-and-scan are still web-womb legacy thinking. The opportunity is to take what we’ve learned from open network economics and leverage the experience back into closed systems to protect the competitive edge.

Shop-and-scan has been a solution looking for a problem for well over a decade in the U.S. Putting an SnS app on a smartphone doesn’t make it much more attractive for tech-savvy Millennials, wishful thinking notwithstanding.

My local grocery store has had self-scanning devices for some time. I tested them out when they were first introduced, but stopped using them because I found the process cumbersome and didn’t feel that the self-scanners really helped or improved the shopping experience. One of the major drawbacks was that I was still required to go to a register where I had to register my self-scanner device so I could pay. This completely reduced the incentive for me to use the devices because I was still being forced to endure the painful step of having to wait for an available register and then go through the payment process. In order for self-scanning to really catch on, there needs to be an increased focus on the overall experience. The self-scanners I used were fairly rudimentary and didn’t offer a lot of additional value over and above the basic ability to scan items. Using a smartphone app that had incremental utility/value, including automatically identifying personalized offers that could be applied to my purchases and presenting health information… Read more »
0
|
0
-   Share

Beyond the awkwardness of managing shopping and scanning concurrently (pointed out by Herb and Ed above), there is a very real issue of shrink that is hard to police. Random employee re-scan of baskets has been tried. Talk about a poor shopper experience! An automatic and reliable basket scan will ultimately be the answer. Several technologies are vying to deliver this capability.

I second Frank’s notion of what is now being termed “Contextual Marketing” (see today’s Brick Meets Click related article). Knowing the time of day and day of week, the weather, the store location, the shopper’s location and path in the store, what’s already in the basket in addition to relevance derived from the shopper’s detailed purchase history will enable the shopper’s device, likely a phone, to make precise and instant recommendations that please the shopper with marketing efficiency that benefits retailers and brands. Aspects of this are being experimented with now.

Years ago we had a big warehouse type store that the customer used a grease pen to mark the prices on the cans and other food products they bought to save time and money for the cashiers. Within a year, the fraud level of putting a different (hint … lower) price on the products was so high, the program ended. Sorry, but the reality in the modern times applies to this as well. Will the customer scan everything they buy? Unless the RFID chip is on every product, how do you know if they scanned everything?

This sounds good in theory, but I don’t see a rush by stores willing to do it.

Walmart is also expanding its pilot of Scan & Go, but this time using the supplied scanning device, which I used and liked better than scanning with my phone. By supplying the device, it ensures that anyone can use the service regardless if they have a smartphone or not. I witnessed senior shoppers using the handheld scanners with ease.

I’m glad the QOD prefaced the issue as “in a significant way” because I think that’s the key: i.e. we’ll see adoption, but nothing approaching a majority, and for the reasons — shrink and convenience — that some cited (surprisingly only two brought this up, but one of them is actually a grocer, who has to deal with the — you know — reality of all these theoretically whiz-bang tech ideas).

Gee, am I on the schedule today? I don’t go to a retailer to work for the retailer. They work for me. This is some techie’s dream, but no one else’s.

For large orders like those in department stores, grocery stores and the like, the likelihood of consumer error increases beyond acceptable risk levels. For these types of orders we may soon see semi automatic check out systems looking much like the package handling and tracking systems used in large delivery companies like Amazon, USPS and the airlines industry. The software and conveyors are there but still expensive and awaiting the needed tweaks for volume consumer traffic use.

Braintrust
"I can’t predict if or how long it will take to happen. But consider what was said back when the airlines asked customers to book their tickets online. Then eventually to check in online."

"Until something like Near Field Communication (NFC) becomes practical for packaged goods, this is NOT going to happen. Stop investing hundreds of millions in new ways for shoppers to assist retailers. It’s supposed to work the other way around."

"If retailers are concerned about the risks of this approach then they could consider phasing it in by initially offering smart phone payment as an option to their most loyal customers before evaluating the impact and expanding the program."