Are dirty sweaters treason to the reason for the season? 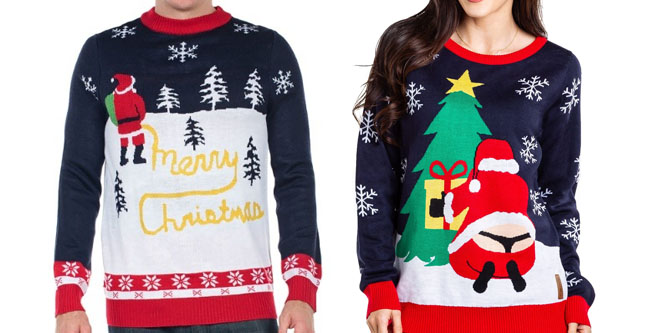 Ugly Christmas sweaters, by one journalist’s account, have plummeted from merely tacky to truly tasteless.

A proliferation of brands are selling Christmas sweaters with ribald, if not outright obscene, designs, according to The Washington Post. Searching online and even in brick & mortar stores, one can find sweaters depicting Santa, his elves and even his reindeer involved in sexual double-entendres, engaged in some manner of lewd or excretory activity or, in at least one case, doing hard drugs.

Walmart last week apologized for selling a sweater depicting Santa doing cocaine with the caption, “Let it snow.” Walmart pulled the sweater, but a version is still available on Amazon.com.

Post journalist Maura Judkis points to this ramped-up level of raunchiness as an evolution — or devolution — of last decade’s development of workplace “ugly sweater parties” into something even uglier.

The fate of once booming online t-shirt company Solid Gold Bomb offers a cautionary tale of how quickly things can go south for a vendor that offends the sensibilities of the buying public, even if by accident.

In 2013 the company, built on auto-generating shirts that parodied a British phrase “Keep Calm and Carry On,” experienced a wave of internet outrage when shirts featuring phrases that appeared to make light of serious, violent and taboo topics were discovered on the company’s Amazon marketplace according to CNN. The company’s founder explained that the offending shirts were, in fact, the product of an algorithm that randomly put words together and that the shirts had never actually been printed. The company was removed from Amazon for three weeks, inundated with negative press and was never able to recover.

But while Solid Gold Bomb was led into error by an algorithm with no sense of  taste, plenty of intentionally tasteless products have no problem hitting it big.

DISCUSSION QUESTIONS: What’s driving the trend behind bawdy holiday sweaters? How do retailers draw the line in determining whether an item is playful or objectionable?

Please practice The RetailWire Golden Rule when submitting your comments.
Braintrust
"The trend is for everything to eventually drill down to the lowest level and frankly, I’m over it. "

"Do folks have a "right" to make and sell offensive clothing? Sure, it is still (barely) a free country, but freedom is always a two-edged sword..."

"Retailers need to work harder to prevent bawdy from becoming blasphemous when they put their assortments together in the first place."

17 Comments on "Are dirty sweaters treason to the reason for the season?"

It’s a free country for people to buy whatever they want, but that doesn’t mean it’s right to subject the rest of us to their bad taste. It’s an unfortunate sign of the coarsened times we live in, including (not to get too preachy) the President’s routine use of profanity in his public speeches or declining standards on network TV.

I’m no bluenose, but religious holidays (and that’s what Christmas is) should be treated with a modicum of respect. Retailers need to work harder to prevent bawdy from becoming blasphemous when they put their assortments together in the first place.

When I was much younger I remember seeing these types of sweaters, mostly homemade, at get-togethers at relatives’ homes or at Christmas parties. I guess this is something that shouldn’t be publicized or sold in this day and age? Opinions?

I think most younger shoppers would see this as harmless fun while Boomers would be more shocked.

Uhm … how about “bawdy holiday revelers”?

A casual visit to PeopleOfWalmart.com will reveal some people’s desire for blatantly offensive clothing. There’s a market for it, unfortunately.

Like the Urban Outfitters blood spattered Kent State sweatshirt or Holocaust star t-shirt? Where are the voices of reason?

Georganne, I agree with you 100 percent. There is a market for child pornography too, but that doesn’t mean we should tolerate it. There’s nothing “funny” about murdered students or genocide. Adults ought to think twice about the messages they’re sending to children. If the people wearing these sweaters were raised by parents who wore ugly sweaters as a joke, just imagine what their children will wear. As to the voice of reason … sadly I haven’t heard it in quite a while, except of course, in your comments here.

Thank you, Ryan. Urban Outfitters isn’t the only retailer who has sold clothing like this, and sadly, they probably won’t be the last. Ugly Christmas sweaters are just ugly. And harmless. But the ones discussed in this article are in an entirely different league.

The trend is for everything to eventually drill down to the lowest level and frankly, I’m over it. We can add dirty Christmas sweaters to the long list of distasteful clothing retailers have offered over the years.

It says more about the person wearing it than the company that sold it. However, I am guilty of having “nothing to wear” to an ugly sweater party. It’s a contest for the funniest and highest attention-grabbing sweater. Truth of our times. Next year might be worse, but there is a short life-cycle here.

The trend of bawdy holiday sweaters is only the next thing in the overall trend of over-the-top, distasteful or obscene products consumer can buy in-store or online. As societies change, so do norms. You can find many products with these type of themes and what is potentially offensive today may become mainstream tomorrow. Just look at the greeting cards you can buy at retailers today. Cards today are sometimes much more edgy and bawdy than a few years ago.

Call it culture wars, call it whatever you want, the truth is that we are losing the “civil” part of being a civil society. I have been a tireless champion of the First Amendment and free expression all my life. I don’t believe books should be banned, films should be censored, or lyrics edited. The difference here is that it is my choice to read a book, watch a movie, or listen to a song, but it isn’t my right to impose my taste on everyone I run into by wearing a sweater with Santa sodomizing Rudolf. One BT panelists suggest this is a generational thing, to which I respond, “Millennial Please!,” Boomers ran around in public naked covered in Day-Glo paint. [A quick joke to break the tension.] This is absolutely not about evolving mores, or social conventions. Georganne Bender is totally correct, like lemmings, we have plunged over the cliff of shared, common decency. But, the issue is even deeper than that. It is that we live in a society that denigrates facts,… Read more »
0
|
0
-   Share

It strikes me that the appearance of this trend is related to something else: automation has made it relatively easy to create these sweaters. When it used to be exceptionally hard to make goods like this, we didn’t see them unless Grandma decided to knit one.

For the moment, it’s a passing fad. This is one case where the market will end up voting against them and only obscure online outlets will carry them in the future.

I initially read “dirty sweaters” a bit too literally! Regardless of how “clean” they are in any sense of the word, the image of piles of these stacked in a landfill always pops into my head. What a wasteful way to make a statement.

I see no “bawdy trend” or at least no evidence has been presented, just the “same old, same old.” What’s changed, of course is the ability of everyone (with internet access) to see the prevalence of tacky merchandise without having to visit “those kind of stores.” But retailers will figure it out … they always have.

Everyone have a happy holiday, and remember when setting out a treat for Santa, just because Cannabis laws have been liberalized, the sleigh is high enough already!

Everything has a cycle, I hope we are at the end of the bawdy, rude, crude cycle and will move on to a cycle that encourages all of us to appreciate the wonders of life and celebrate the best ideas.

You typically will not see offensive products in chain stores, and when you do, most bigger retailers are swift to pull them from the shelves. Independents are another story.

Braintrust
"The trend is for everything to eventually drill down to the lowest level and frankly, I’m over it. "

"Do folks have a "right" to make and sell offensive clothing? Sure, it is still (barely) a free country, but freedom is always a two-edged sword..."

"Retailers need to work harder to prevent bawdy from becoming blasphemous when they put their assortments together in the first place."