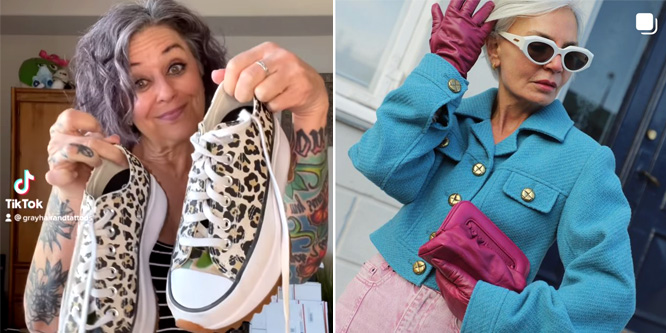 Among the star older influencers are the “The Old Gays,” four men from California in their sixties and seventies who use social media to give their perspectives on pop culture and growing up as gay men. The group, with 5.8 million followers on TikTok alone, have been featured on the “Drew Barrymore Show” and “Today” show.

Fifty-seven year old Lonni Pike, who goes by the name “Gray Hair and Tattoos,” has collected nearly one million TikTok followers and 103,000 Instagram followers with her body and age-positive messaging.

The New York Post last year noted that 92-year-old Helen Ruth Elam, who uses the social tagline “Stealing Your Man Since 1928,” earns as much as $9,815 per promo.

It’s uncertain how many senior influencers are out there, but they may provide marketing conduits for reaching their digitally-savvy peers. Pew Research last year found the percentage of older adults aged 65 and older who used social media grew from three percent in 2005 to 45 percent in 2021.

With the majority of TikTok and Instagram users under 24 years old, the bigger opportunity may be reaching the Gen-Zers inspired by the authenticity, wisdom and can-do attitude of their elders.

“They’re showing that anybody can do these things, that you don’t have to be afraid of aging. The 20 and 30-somethings don’t often think about that,” Ms. Bryant said. “The authenticity that we’re seeing in some of these older influencers is really refreshing. That’s part of the complexity of their narratives.”

DISCUSSION QUESTIONS: Do elder social media influencers offer big opportunities for brands to reach older consumers? Do you see potential for them to reach younger audiences as well?

Please practice The RetailWire Golden Rule when submitting your comments.
Braintrust
"The biggest takeaway here is the not so gentle reminder that on social media, particularly TikTok, brands should not aim to only target Gen Z."

16 Comments on "Are granfluencers a thing?"

Older influencers affect different people in different ways. Some appeal to beauty, some to fitness, some to style, and some to finances. They are all effective in their respective segments of the “older” population and should be used for promotional purposes.

The biggest takeaway here is the not so gentle reminder that on social media, particularly TikTok, brands should not aim to only target Gen Z. When Facebook started, it was similarly young – and ultimately expanded to all generations because people like to connect with one another (and share their lives, evidently). Youth tends to adopt technology the quickest, but granfluencers show the appeal extends across generations and the platform should be treated that way accordingly.

Personal note – I recently introduced my 63-year-old mom to TikTok and she loves it!

It all goes back to the fact that consumers want to buy from people in ads who look like them. I bet not many of us remember when Estée Lauder, a brand geared to mature skin, fired model Karen Graham at age 23 because she was too old. What?! Marketing a face cream that’s designed to prevent aging but using a 20-year-old model is just stupid. Yet, advertisers still continue to do it.

The label “granfluencer” is insulting. I actually seek out influencers who are my age and I am not alone. We’re older, not dead.

Great point on the name being terrible – especially if the category is over 50! Yikes. Some people that age have 5-10 year old children…

We’re so quick to label everything. Plus size models are models, and social media influencers are influencers, regardless of age. We need to look beyond the thinking that all Baby Boomers are in their 70s, and that all Boomer women want to wear leopard and sequins, right @Paula?

There is more than an aging population. There is an older population, meaning people live longer. The concept that influencers are just for younger generations is ridiculous. There is great opportunity for brands to market to an older demographic with influencers.

As for an older influencer reaching a younger audience, it really depends on if the product or service is as applicable. I see some late night commercials with Joe Namath and Jimmie/JJ (Dyn-O-mite) Walker pitching products. I can’t see a younger generation having any interest in them, whatsoever. On the other hand, there are some health and beauty products where older spokespersons are able to cross the generational lines.

As a Boomer myself, I totally relate to how granfluencers present product and services. Younger influencers are great for entertainment. Granfluencers talk more of my language when it comes to products I would be interested in buying. It’s great that all the generations have a role in how social media operates as a marketing and communication tool.

Successful influencers are authentic, have a unique point-of-view and creative content. As Boomers and Gen Xers embrace social media they will be another way for brands and retailers to reach consumers of all ages.

As an elder myself, I am going to be more interested in opinions from people I can identify with. Especially for products that are targeting my demographic. I also think that there are ways for people of a certain age to influence younger consumers. Of course it depends on the product and the message. Experience can bring credibility, if projected in the right way.

Can I influence younger consumers? Absolutely. Unless they share my last name, then there’s no chance in my experience.

It’s an influencer group reaching another segment. You have to cover your market as much as you can, so this is not an unusual move.

While Boomers are no longer the largest demographic compared to Millennials (thanks, mortality!), many of them have plenty of discretionary income at this stage in their lives. They may not be “early adopters” but they have spending power — and with it, the ability to turn a startup brand or concept into a mass-market one.

It may upset some BrainTrust members and RetailWire readers to think of 50 as “elder.” And here I thought 70 was the new 40. Seriously, there are a lot of “older” – however you define it – folks out there, many of whom have disposable income and most of whom don’t want to dress like they are 18, so the potential market is there. And, yes, if they are cool enough, some of “the kids” will pay attention. I think marketers need to realize that the whole way we think about life is obsolete, and has been for 40 or 50 years. Americans aren’t marrying at 18, working 30 years at one job, retiring and dying at 66 anymore. Life is just moving too fast for that model. The odds of having your skill sets go obsolete within your working life are higher than they are of staying marketable. The average person starting their first “real” job today may go through three, four, or more different “careers.” Now add in divorce statistics, serial marriages, and… Read more »
1
|
0
-   Share

Elder influencers will no doubt exist, but it will be independent of their age … as it should be.

Maybe the question we should be asking about influencers is, why do advertisers believe that only same-aged influencers can speak to a target market? Why assume that our Gen Z target audience only ever wants to hear from Gen Z influencers? Maybe, just maybe, they want to hear from authentic, interesting influencers who have something to say that appeals to them? And no, I didn’t forget to mention age in that last sentence — age doesn’t determine influence. Content and authenticity does!

Gen Z is particularly interested in doing things that have a positive impact on the community and help reconnect with their roots. Therefore, when granfluencers come forward to promote products, Gen Z consumers find them more authentic than those promoted by relatively younger influencers.

The success of influencer marketing depends on three things: deeper connections with followers, relevance, and perspective. By increasingly understanding and adapting to the digital transformations (in fact, faster than millennials), granfluencers have already proved they are open-minded, creative, and ready to explore and experiment more, which is one of the strongest factors to tap the consumers today. So with granfluencing, marketers would find it easy to drive relevance through meaningful collaborations and build trust with their audience.

There’s room for people of all age groups and demographics in influencer marketing. Older populations have the ability to transcend generations, especially when they can embrace younger tech. And because relatability is what makes influencer marketing so interesting, brands should really look for influencers that share common interests with their target audience vs stereotyping by demographics.

Braintrust
"The biggest takeaway here is the not so gentle reminder that on social media, particularly TikTok, brands should not aim to only target Gen Z."