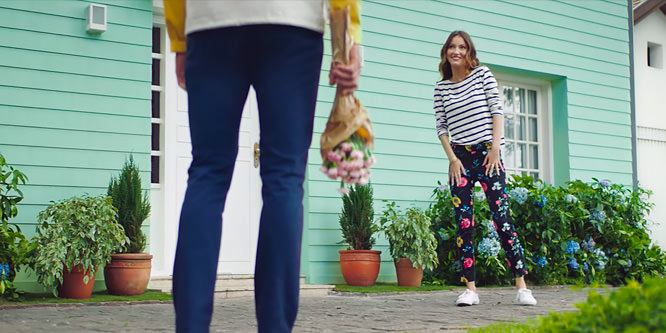 Old Navy is shifting away from its celebrity-driven commercials starring Amy Schumer, Julia Louis-Dreyfus and Elizabeth Banks to focus on product-based spots.

The first execution, entitled “Hi, Fashion,” focuses on colorful khakis. Women are seen climbing out windows to the surprise of suitors down below, throwing red balls or hitting them with golf clubs, and dancing. The ad concludes with: “All pants, jeans and tops up to 40 percent off.”

“That idea of ‘Hi, Fashion’ versus ‘high fashion’ and taking fashion so seriously — really what we are trying to do is just let fun be the fashion statement, versus you being the fashion statement,” Ms. Gersch told Ad Age. “This is something that’s obviously been core to Old Navy’s DNA for a long time.”

A second execution, “Hi, Rollers,” coming in March, features women and girls skateboarding and focuses on a floral-fashion theme. The ad includes a social component with the hashtag #SayHi.

The change comes as declining television viewership and shifts to digital media have altered the way celebrity endorsements work. Bloggers and other social influencers increasingly compete with traditional celebrities.

“The Future of Celebrity Marketing” report from Celebrity Intelligence in association with Econsultancy last year found a wide majority of surveyed marketing specialists still felt celebrity marketing was either “very effective” or “quite effective.” But the report concluded that while traditional musicians, models or movie stars used in media campaigns can help with visibility, a strong social media presence is required to “cut through” with the general public.

The report states, “Brands will need to get wise about only collaborating with stars who have a true affiliation with their brand or products to achieve any real impact. Additionally, less social media savvy celebrities will need to think carefully about their presence on social media moving forward, and decide whether they want to be in it for the long haul.”

DISCUSSION QUESTIONS: Are celebrity-driven advertising campaigns generally more effective than product-driven ones for retailers? Has the arrival of social and digital media been more positive or negative for celebrity endorsements?

Please practice The RetailWire Golden Rule when submitting your comments.
Braintrust
"Celebrity endorsements get their fans' attention but signal to non-fans that a brand isn't for them."

"I am all for the play-on-words product ad concepts, but the 40 percent off part of the spots defy logic to me."

"In digital marketing land, the answer is “test it.”"

Let’s be honest, when the last words are “All pants, jeans and tops up to 40 percent off” the ad is still just another SALE — no matter who is or isn’t in the picture.

I completely agree with you, Bob. If that is their approach there’s no need to seek out celebrities. Discounts and promotions are like getting hooked on a high-sweets diet. Easy to get on … very hard to get off (speaking from someone who has a sweet-tooth).

Celebrity endorsements get their fans’ attention but signal to non-fans that a brand isn’t for them. Product-focused spots speak softer to a broader audience and (for non-fans at least) seem more trustworthy. Social media hasn’t changed the impact of celebrity endorsements but it’s allowed talk-back and revealed the reduced trust effect that comes with them.

We all love celebrity but it comes with a cost, and consumers know they are ultimately paying for the spokesperson. Is it a differentiator? Yes. Does it makes sense for non-premium priced status goods in which bragging rights matter? Give me some product users I can relate to and show me how the product provides value.

The concept behind the use of social media to generate sales is “influence.” Mentioning a good experience with a brand can impact a consumer’s purchase decision. Product categories that are ripe for social media influence vary and those who can influence vary accordingly, i.e. celebrity mentions, friend mentions, mom mentions, mentions from DIYers, etc.

Celebrities have always been risky business. The person who is groundbreaking and well thought-of today can be demonized tomorrow. With social media that downfall can happen in hours and the retailer/advertiser may not recover quickly from how that celebrity tarnishes the brand.

Advertisers who can avoid the risks associated with celebrity endorsements and establish influence through effective communication and shopper-populated social media have more peace of mind. And they may also have a longer cycle for growing business — without needing to jump in and save the day.

What an ad says is also important — whether or not the ad includes a celebrity. The success of the overall marketing plan depends upon how consistent the message is across media — including social media. If there is a strong link between an ad with a celebrity and the social media campaign it can be effective. If the messages are different, one or the other part may be successful but the overall campaign will not be very successful.

Celebrities can be a tremendous advertising advantage — but they can also weigh down creative. Old Navy has been trying far too hard to work the celebs into their creative, leading to convoluted advertising.

That said, can they do better without? I don’t like the new ads either. With celebs or without, Old Navy has lost the clarity of the past with ads that reminded us why we wanted to shop at their store and offered incentive to get us there.

I am all for the play-on-words product ad concepts, but the 40 percent off part of the spots defy logic to me. Why not introduce the products and ads at full price? (which is a good value anyway). They can always ad a sale tag later if the collections don’t sell.

In digital marketing land, the answer is “test it.” Frankly, if the celebrity endorsements are working without the need for 40 percent off, good — record the ROI. Then run a series of ads without the endorsements and compare. Old Navy is going to find that mixing the two is the winning combination for the right ROI. The never-ending trick in marketing is to find the right balance. It will be interesting to watch what they end up putting into practice.

Yes, but like they said below you have to get the right influencers and the ad has to be something that we actually understand. Sometimes what older people think is funny we think is just not funny but strange and weird. Like the kid and single mom commercial, the kid is playing video games (they got that part right) but then he tells his MOM, “No kissing on the first date.” We would Never EVER say that to our moms! (no idea what they were selling.)

Bottom line, advertisers need to have the right team creating the content and text and then matching it with the brand. Make it real and tell us what you are selling fast and we will watch. Oh, and ask us what we think is funny, please stop trying to guess.

Amy Schumer and Julia Louis-Dreyfus may be funny. But I am not going to any store because they promote it. The stores they promote offer huge discounts anyway. So what do they do to add to it? My thought is promote your wares, and do it without someone in an advertisement thinking they are funny by trying on a pair of pants on a dance floor.

The most important trend we see with brands is authenticity. Celebrity endorsements work when there is a strong affiliation but, because it comes with the notion that they are “only doing it because they are paid,” it is hard for them to seem genuine, no matter what. I am a huge fan of what companies like Lululemon do. Most of their ads are employees or customers. It completely resonates with consumers.

Braintrust
"Celebrity endorsements get their fans' attention but signal to non-fans that a brand isn't for them."

"I am all for the play-on-words product ad concepts, but the 40 percent off part of the spots defy logic to me."

"In digital marketing land, the answer is “test it.”"